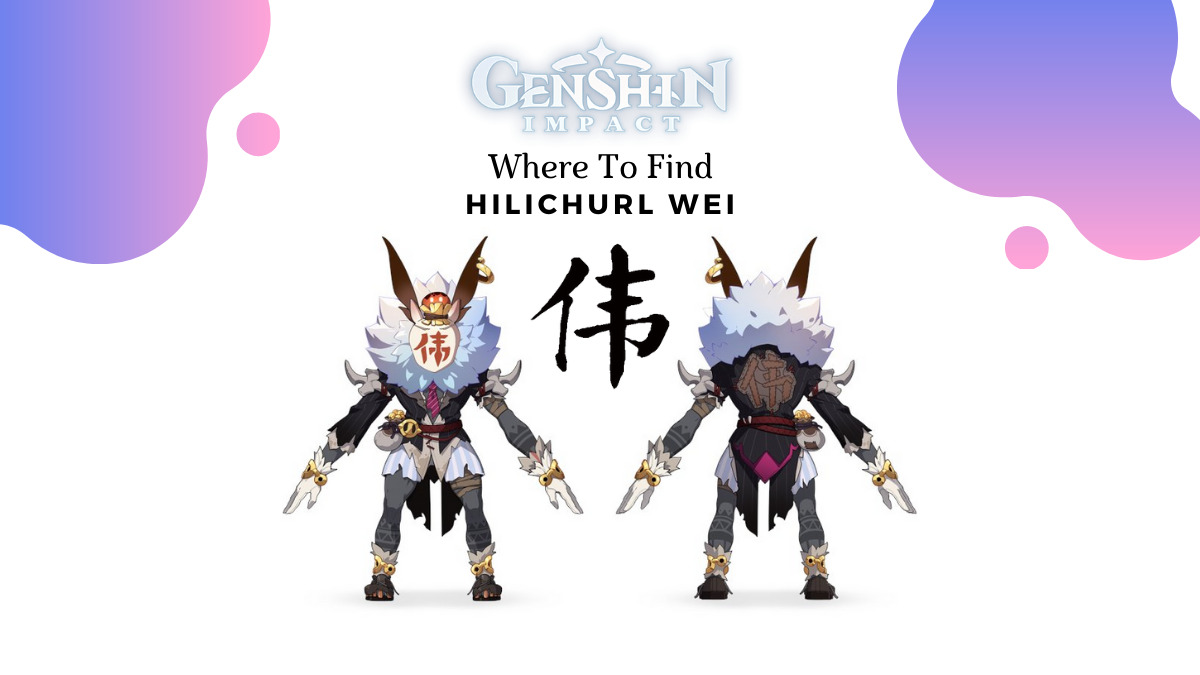 So, you’re looking for Hilichurl Wei. In the upcoming Genshin Impact 1.1 update, which is happening on the 11th of November, players are going to get more Genshin content and storylines. But with the update, there’s also a new Hilichurl being added to the game that will rewards players with Primogems via achievements upon defeating them.

UPDATE: Speaking of Free Primogems, there’s also a new redemption code for you to redeem 60 FREE Primogems and 10,000 Mora. Details here in this article! The article linked here will also be our article for Genshin Impact redemption codes, and we’ll constantly update it when new codes are released, so stay tuned!

Based on the 1.1 update preview that was shown by Mihoyo, here are the locations where you can find Hilichurl Wei, so be sure to mark them first on your map to prepare for the update.

Location 1 – Windrise Statue of the Seven

Upon teleporting to the Statue of the Seven in Windrise, look to the back and walk towards the huge tree. There should be one of him sitting under the tree roots.

Once you’ve teleported to Cape Oath Waypoint, head north east towards the cliff area. Go past the spiral abyss teleportation portal and walk to the edge. There should be a Hilichurl Wei sitting there.

You can also find a Hilichurl Wei at Stormterror’s Lair Waypoint, which is the one in the middle. Teleport there, and exit south west. Glide towards the Wolvendom direction, and you’ll find him sitting near some crates on a destroyed bridge.

Next, head to the waypoint in Cuijue Slope that’s closest to the Pyro Regisvine. Walk north and head towards the center of the nine pillars. He should be sitting near the slanted lamp on the floor.

For the next one, you might want to teleport to the Lingju Pass Waypoint. Once you’re there, head south west and glide off the cliff to a nearby hill. He should be sitting right by the edge of it.

Last but not least, there’s another one at Liyue Harbour North East Waypoint. Head south west and climb up the rocks. Keep climbing up towards the hilltop where you will find the Seelie statue, he should somewhere around there.

This next one is fairly easy to find, it’s right beside the Anemo Hypostatis, behind a Mondstadt Shrine of Depths. Just teleport to the nearby waypoint, and you can make your way there easily, towards the left.

This one’s fairly easy. Teleport to the waypoint in Lingju Pass, and walk towards west direction. Go straight all the way and you should find him right in the middle of the pond, on top of the hill as pictured above.

For this next location, teleport to Stone Gate waypoint. Turn towards the right, and make your way up the mountain. He should be standing at the top, waiting to give you some cabbages.

You can also find the Hilichurl Wei at Qingce Village, just walk past the bridge and walk or jump towards the centre of the tiered garden. He should be lying around lazing on the stone edge.

For this location, just teleport to the Mingyun Village Statue of the Seven. From there, walk east and on the cliffs, you will find him just staring out into Yaoguang Shoal beach.

The one in Qingyun Peak is fairly easy. Just teleport to the waypoint that’s right in the middle of Qingyun Peak. Fly west and you’ll find him nearby standing on one of the peaks that has three to four circular areas on the top.

This one is extremely easy, just head over to Taishan Mansion domain in Jueyun Karst. Once you’re in front of the domain, look up and climb up the right side of the domain entrance. You should find him sitting at the top right under a huge tree.

Hilichurl Wei is now finally available in the game. Once you’ve eliminated him, he will drop:

You can only get AR Experience by killing it for the first 10 times in a day. You won’t get anymore after going past the limit of 10. Hilichurl Wei refreshes four times a day, so be sure to check the spots again. After killing two of them, there’s a 12 hour refresh time for it to spawn another two. The best way to find Wei, is to get some friends, find Wei, switch between worlds, and repeat.

You will also receive achievements, and the achievements can be redeemed for Primogems in Challenger Series II.