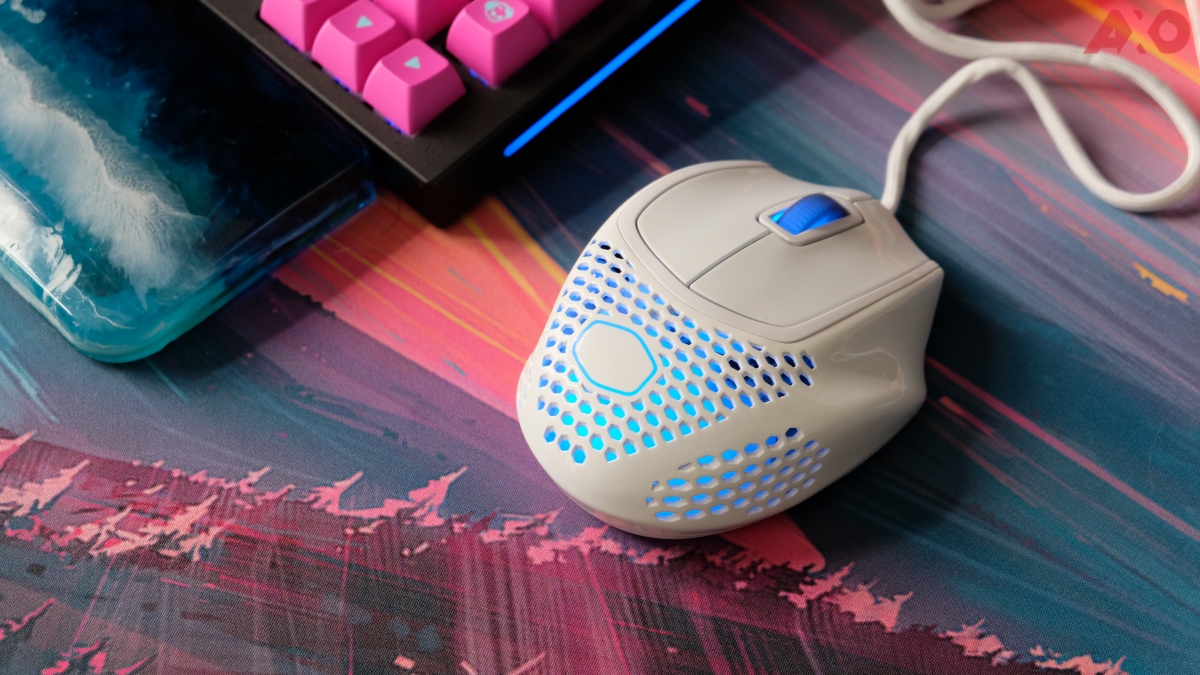 After almost a decade, the Cooler Master MM720 gaming mouse finally arrives as the successor to the original Spawn mouse. Launched back in CES 2020, the MM720 has a honeycomb style chassis, with an upgraded sensor, and a fabric cable. No wireless connectivity though, but let’s look at what else the mouse has to offer.

The Cooler Master MM720 is a short gaming mouse, but has a wide design and is mostly defined by its curvy design approach. If you look closer at the mouse, there is not one flat surface and every part of the mouse has been curved in some way, and to some degree. Initially, I thought it was weird and I thought I’d hate it. But, to my surprise, I actually grew to like it a lot, and fast.

We got the glossy white version of the Cooler Master MM720, which would go really well with our white setup when we decide to switch to it. On the left, there are two side buttons, but weirdly enough, they aren’t in white to match with the whole mouse. Instead, it’s black which sticks out like a sore thumb (geddit?). Nonetheless, the mouse might seem eccentric at first, but it’s a really nice mouse to hold.

In terms of build quality, the Cooler Master MM720 is well built and has a solid construction despite being all ABS plastic. Pressing and squeezing the mouse hard, there are no creaking sound to be heard, and when you flick it around, you can’t hear any loose parts as well. The internals are also well shielded behind the honeycomb design, and the bottom has two large pure PTFE feet for maximum glide across your mousepad.

Cable wise, the Cooler Master MM720 now sports a braided cable that matches the colour of the mouse, instead of the rubber cable that was found on the original Cooler Master Spawn. This offers a more natural glide on your table surface, and you don’t even need a mouse bungee to hold the cable up. However, I do have the fear that it will one day start fraying and I pray that doesn’t happen to the cable as it isn’t detachable.

As mentioned above, the weird looking mouse that is the Cooler Master MM720 grew on me really quickly, and I’ve loved using it ever since. I just can’t seem to go back to long, bulky gaming mice anymore. That’s also because the MM720 weighs only a mere 49g, and I was shocked when I picked it up for the first time.

The Cooler Master MM720 is so lightweight, paired with the large PTFE feets on the bottom, they glide so well on the mousepad I’m using. My hands just rest on the mouse nicely, and it feels like they hug the mouse just right in all its contours. There’s also a pinky rest on the right side of the mouse which gives it that extra comfort. However, that also means this mouse more catered for right handed gamers.

In the performance department, the Cooler Master MM720 packs a PMW-3389 optical sensor, which can offer 16,000 DPI sensitivity, and also a maximum of 400 IPS. Acceleration wise, this small boy can go up to 50g. With the sensor now being in the middle of the mouse, on the bottom, it makes more sense and you can adapt to it faster.

The clicks are super responsive thanks to the LK optical micro switches. Actuation is near instant, and the debounce time is close to zero, allowing me to respond faster when dodging those Mitachurls in Genshin. As for the side buttons, I don’t really like where they’re placed. I would’ve preferred if the side buttons were positioned a little upwards so my thumb won’t be on the edge of it.

In terms of grip, the MM720 we had is the glossy version, so it does get quite slippery sometimes. According to Cooler Master, the mouse is made for palm and claw grip gamers, but I think it’s veering towards claw grip more.

The mouse is compatible with the Cooler Master MasterPlus+ software (long name I know), and that’s where you can perform firmware updates and more. The six programmable buttons on the mouse can be configured within the software. Pressing down on the scroll wheel actually enables a second set of command for each of the mouse’s buttons. However, I didn’t find myself using that feature at all as most of my shortcuts are already on my keyboard.

You can also tweak angle snapping, toggle lift-off distance, set polling rate from 125 all the way to 1000Hz. DPI wise, you can go up to a maximum of 32,000 DPI, but it can be a bit wonky because of the sensor’s limitation at 16,000 DPI. On top of all that, you can also tune angle tunability, button response time, and even the system’s double-click speed, as well as pointer sensitivity. The creme de la crop here is actually the Surface Tuning, which allows the mouse to optimize its sensor for the mousepad you’re using.

The Cooler Master MM720 offers great value for a gaming mouse this light and comfortable. Its design is unique, and totally different from what other manufacturers are offering out in the market. It features the honeycomb design for maximum lightness, upgraded sensor, braided cable, 100% PTFE feet for superb gliding, and two RGB lighting zones. That’s a whole lot of features to get for RM149, don’t you think?

Cooler Master has grown and developed into a multi-faceted technology company driven by innovation, agility, and passion. With a collective eye on the future...