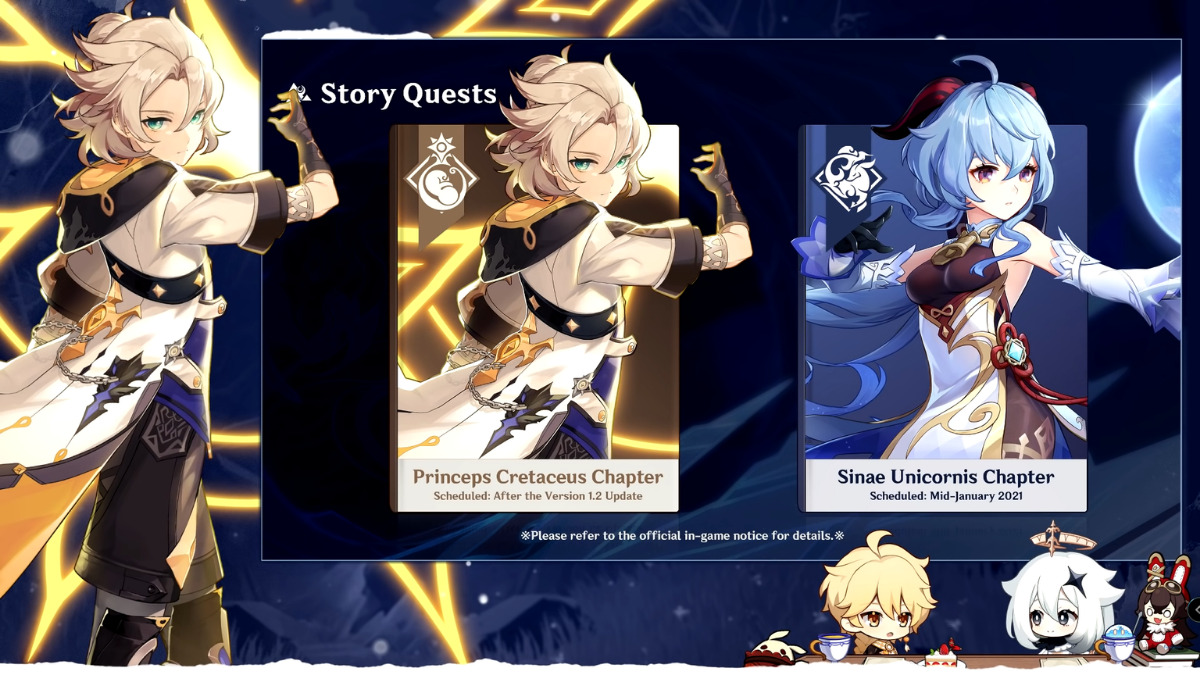 The Genshin Impact 1.2 update has officially been announced! Let’s take a look at some of the things we will see from the new update that will take place on the 23rd of December 2020. These new additions include a new map expansion – Dragonspine area, new characters, new monsters, new events, and more!

What we know so far about the Genshin Impact 1.3 Update!

If you’re tired of reading, here’s the entire livestream for you to get updated on the upcoming Genshin Impact 1.2 update.

This here is Ganyu, you’ve probably met her before as she’s the one who extends Ningguang’s invitation for the traveler to join her in the Jade Chamber in the skies. She’s an emissary and secretary for the Liyue Qixing. She is a cryo bow user, though it isn’t shown if she is a 5-star or 4-star character. Her charged attack has two different levels of charging, each shot dealing different types of attack and damage. For her elemental skill, she shoots an ice attack which creates an ice lotus that attracts enemies and deals AOE damage. For her elemental burst, she summons a huge ice ball and rains a ice storm on the enemies dealing massive damange.

Next, we have Albedo, who according to his character description, is a genius known as the Kreideprinz. He is also the chief alchemist and captain of the investigation team of the Knights of Favonius. No word yet on his star rating or his abilities, but he will be the main character of interest throughout the Dragonspine story.

Albedo is a Geo sword user, and his elemental skill is to summon a geo isotoma that allows the player to stand on it as a platform. The geo isotoma would also be raised a certain height, and players can do plunge attacks by jumping off it, its use is up to your creativity. For his elemental burst, he creates a geo isotoma explosion, and if the geo isotoma is already on the field, the damage will be even more massive.

The story quests for the above two characters will also be released in game. Albedo will arrive first with the Genshin Impact 1.2 update, while Ganyu’s story will only be released in mid-January 2021.

This here is Rosaria, and she will appear in the Dragonspine story event. Not much else is revealed about her, apart from the fact that she is a vampire. So, we’ll just have to stay tuned for the Dragonspine update coming soon!

Introduced together with the Genshin Impact 1.2 Update are new weapons! Players will be given a free 4-star sword – Festering Desire – that gives you an advantage when taking on the enemies of Dragonspine. To take on the new challenging quests and bosses, its base stat is to increase elemental attacks by 16% and crit rate by 4%. When you explore more around Dragonspine, you can also unlock three different levels of perks for the sword.

There’s also a new 4-star Dragonspine Spear, 4-star Claymore Snow-tombed Silverstar, and a 4-star Catalyst Frostbearer, which can all be obtained by completing quests and commissions directly from the Dragonspine’s event.

Upon completing the quest “In the Mountains,” we will be able to unlock an all-new Domain at Dragonspine’s summit known as the Peak of Vindagnyr. Challenge this Domain to receive Blizzard Strayer and Heart of Depth set artifacts.

As for the two new artifact sets, they are catered to hydro and cryo users, each with their unique element boosting capabilities.

In the Genshin Impact 1.2 update, we will also be introduced to a new map release in the world of Teyvat – Dragonspine. Located right below Dawn Winery, Dragonspine is a rocky terrain that is filled with ice and snow.

Announced with Dragonspine is a new mechanic called Subzero Climate. When in Dragonspine, players will be faced with Sheer Cold status that will accumulate rapidly in subzero climate. Once the Sheer Cold status reaches its limits, characters will start losing HP. If players get into water or start swimming, the sheer cold status will deteriorate even faster and HP will be lost at a faster rate too.

But of course, there are things in the map that will help you regain a bit of warmth on your travels – Warmth Seelies, Fireplace, Heat Totems.

The warming bottle is craftable using Flaming Flower Stamens and Starsilver to craft a Warming Bottle. The Warming Bottle will enter a 120s CD upon use. The bottle will emit warmth and reduce the accumulation of Sheer Cold in a small radius for a short duration.

Seen above are some of the new monsters that will appear in Dragonspine. There’s the new Frost Yeti, Cryo Cicin Mage, Cryo Mitachurl, Cryo Hilichurl, Cryo Samachurl, and a new type of Ruin Guard – that shoots lasers!

We also see a new red-coloured seelie, which will give warmth to might give players even more chests to farm and explore. Not only that, this new seelie might unlock new achievements for the Dragonspine area.

“The Chalk Prince and the Dragon” event will soon begin, and this is similar to the Fischl event we got to experience in version 1.1. The currency this time is the crimson essence, and it can be used to exchange for different types of items in the Event Shop, which include:

In the Genshin Impact 1.2 update, players will be able to take on new Hypostasis that are stronger than the current ones available in game. Players can also choose the different difficulty level, and the harder the level, the more rewards for you to sow.

On top of the Dragonspine Genshin Impact 1.2 update, travelers might get to enjoy a new event with plenty of treasures to seek. There will be a new treasure hunting activity, where you can earn “Iron Coins”. The iron coins can then be used to exchange for items in the Exchange Shop, including:

And also, Mini Seelie! There are three different types of Seelie that will follow you around on the map during your travels. Each Seelie has different abilities. It can indicate where buried treasures are.

Liben is back in Marvelous Merchandise! This time, he requires even more items for exchange, but he will also offer more rewards in return. Be sure to check out the rewards in other players’ worlds because each world offers different rewards. So if you see a reward you want in your friend’s world, you can claim it from there.

Announced with the Genshin Impact 1.2 update, are some long awaited quality of life improvements! This includes the ability to give a nickname to your friend, so you will always be able to track who he is even if he constantly changes his name!

In domains, once you’ve completed the challenge and claim your rewards, the rewards will automatically be claimed into your inventory, and a summary screen will show you everything you’ve got from the domain. Apart from that, players now have the ability to challenge the domain again from within the domain itself – no more loading screens going in and out of the domain, what a time saver!

Meet the new “Kamera” gadget, which lets you take better screenshots with updated poses and also facial expressions. The screenshots taken in-game will be saved directly into your Genshin Impact folder on your PC or mobile.

Last but not least, even more Acquaint Fates! That’s right, everytime you ascend your character at level 20, 50, and 70, you will receive one Acquaint Fate for each ascension you perform. For example, if you have a character who ascended at level 70, that means you’ll be getting a total of 3 Acquaint Fate from that character alone.

These Acquaint Fates can be claimed from the character screen, and it will also show you a ascension material summary so you can prepare the materials beforehand.

These Acquaint Fates also apply to previous characters you’ve had before update 1.2, so when the update is out, be sure to get claiming!

These are just some of the updates we have for the Genshin Impact 1.2 update. For further details, we’ll just have to wait till the update is out to find out more. We’ll update this article with new information whenever we find any.

The Genshin Impact 1.2 update will arrive on the 23rd of December 2020, just in time for Christmas, which is after the conclusion of Zhongli’s banner. No word yet on who will be featured for the next banner, but we’re thinking it’s either Albedo or Ganyu.