Daily News Gaming Get Up To Speed Smartphones

Get Up To Speed: Asus ROG Phone 5 Series Unleashed; Priced From 2,999 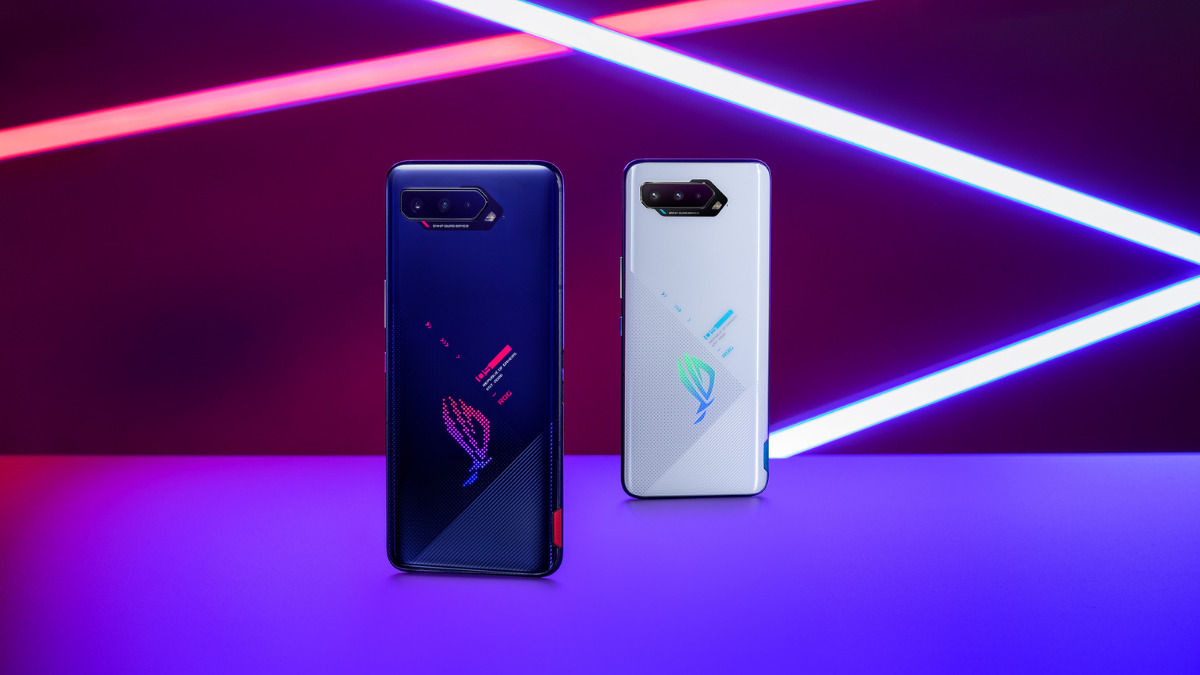 The ASUS ROG Phone 5 has finally been unveiled for the world to see, in its full gaming glory. The 5th iteration of the ROG Phone series has received quite the aesthetic overhaul, but what’s more enticing is the hardware underneath. There are a couple of different variants to the ROG Phone 5 this time around, so let’s go through them one by one, shall we?

As for the display, they all feature a 6.78-inch AMOLED display with a 2448 x 1080 resolution (FHD), a 144Hz refresh rate, 300Hz touch sampling rate, and a 1ms response time. It has got an 800 nits outdoor readable brightness, with a peak at 1,200 nits. The screen is colour accurate in the sense that it has a rating of Delta-E < 1, it supports HDR10 and HDR10+, as well as covering 111.23% of the DCI-P3 colour gamut coverage. The screen is protected by Corning Gorilla Glass’ strongest yet, Victus. There is also an Always-On HDR display onboard.

The ROG Phone 5 weighs 239g, and measures 9.9mm thin. Connectivity wise, it has Wi-Fi 6E, Bluetooth 5.2 with support for Qualcomm’s aptX Adaptive, Wi-Fi Direct, and NFC. There are two USB Type-C ports, one on the side, and another on the bottom of the device, both can be used for charging.

When it comes to the camera department, the ROG Phone 5 is equipped with a 64MP main Sony IMX686 sensor, a 13MP ultra-wide angle sensor, and a 5MP macro sensor. On the front, there’s a 24MP in charge of selfies and video calls, or even livestreams.

In terms of battery life, the ROG Phone 5 has a large 6,000mAh battery onboard, that supports fast charging with the bundled 65W HyperCharge charger in-box. The device is optimized using new software optimizations and power-saving mechanisms, including a charging upper limit, steady charging, and enhanced scheduled charging. There are also passive power-saving mechanisms to limit inactive apps and deliver up to 67% more power savings

When it comes to colour options:

Another thing that’s different between the variants is the box packaging and the RGB lighting system on the back of the phone. The ROG Phone 5 standard version gets a regular rectangle box packaging design, while the ROG Phone 5 Pro and Ultimate Edition gets the triangular hazard sign box design that’s similar to previous generation design.

As for the RGB lighting system, the ROG Phone 5 series continues the ROG built-for-gamers design philosophy with ROG Vision, a never-before-seen rear matrix display — available exclusively on ROG Phone 5 Pro and ROG Phone 5 Ultimate — that shows customizable animations in response to a variety of system and in-game events. Owners can even create custom animations to make their phone even more personal.

There are also massive enhancements to the AirTrigger 5 control system, which gives gamers up to four distinct ways to interact with their device. There’s also the powerful GameFX audio system that has been overhauled to deliver even more immersive sound.

To enable maximum sustained performance, the GameCool 5 cooling system in the ROG Phone 5 series now has an optimum thermal structure featuring a centered CPU with the battery split into two parts, one located on each side of the CPU. This ensures that the heat generated by the CPU is transferred to all the edges and corners of the chassis simultaneously for higher thermal efficiency. The reshaped 3D vapor chamber and extensive graphite sheets also help to spread the heat evenly across the device to reduce heat build-up in the middle.

The completely revamped AeroActive Cooler 5 now intakes and expels an incredible amount of air directly onto the center of the phone — right where the CPU is — to deliver an amazing 10°C drop in the CPU temperature. It also features two extra physical buttons to allow a genuine console-like gaming experience.

The ROG Phone 5 Pro and ROG Phone 5 Ultimate additionally features innovative hidden rear touch sensors on the back cover, which provide L2/R2 trigger functions, just like a game console controller. These also work together with the ultrasonic sensors, the AeroActive Cooler 5 buttons and the motion controls to provide full control for a total gaming experience.

The all-new performance manager in Armoury Crate now includes X Mode, with multiple system profiles to give gamers even more performance settings and performance tuning tools, so they can instantly adapt the phone to the task at hand.

The ROG Phone 5 will be available for purchase nationwide in Malaysia starting from the month of April 2021. However, pre-orders for the device will start from the 11th to 25th of March 2021, where each pre-order will come with a free ROG Kunai 3 Gamepad that is worth RM499. The Pro version gets an AeroActive Cooler 5 included in the box, while the Ultimate Version gets the cooler and a ROG Ultimate Fan Gift Box as pictured below.

ASUS Vivobook 16X might just be the laptop that fits your budget even when you are looking at a laptop that has a bigger...

ASUS has unveiled that the new ROG Strix and TUF Gaming NVIDIA GeForce RTX 4080 series graphics cards will be available.  Powered by the...