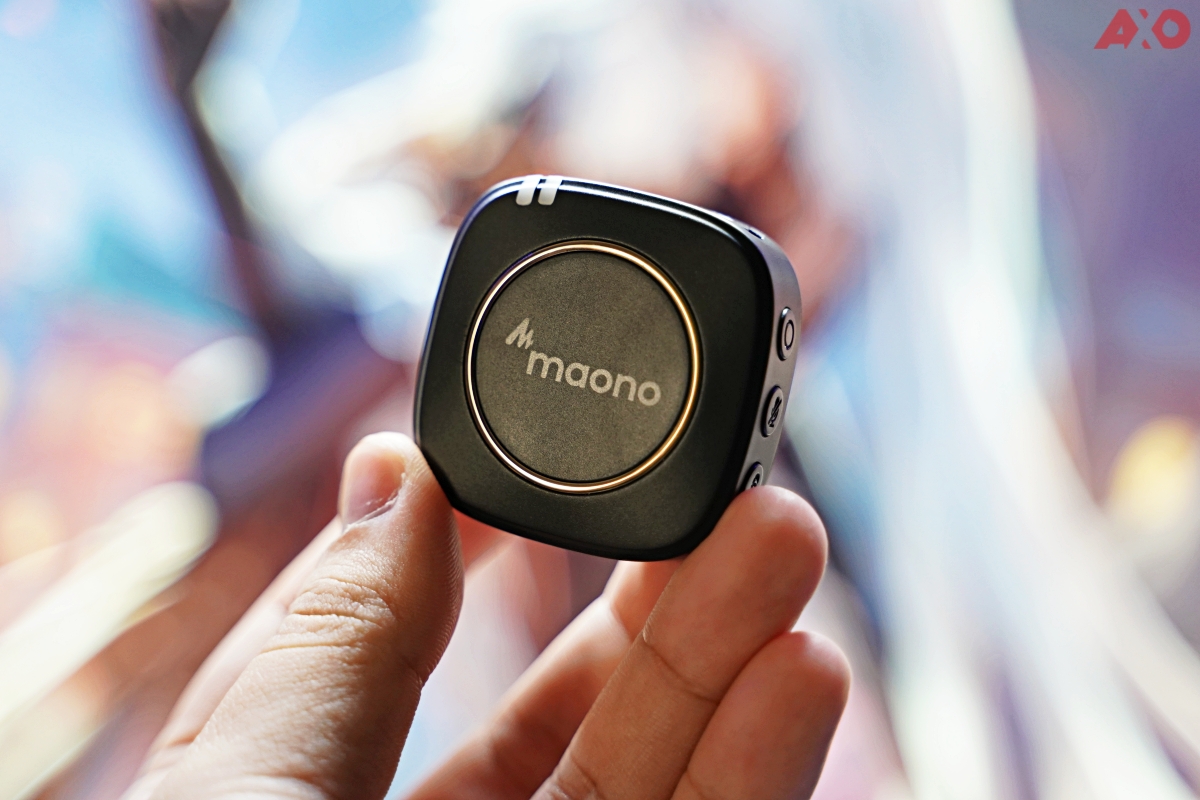 The Maono WM820-A2 is a simplified wireless microphone kit that’s made for those who are on-the-go and need a fuss-free wireless audio recording setup. Usually, you’d get condenser and dynamic models, those are commonplace, but they’re not exactly wireless and distance will be an issue. For those doing street interviews, or recording content outdoors, a wireless microphone system would prove useful, and this is where the Maono WM820-A2 comes in.

The Maono WM820-A2 is the variant that comes with two transmitters and one receiver. Before we set things up, we should know what is a wireless microphone system. It’s basically having a transmitter that obtains the audio which then sends the audio via a specific wireless frequency band (2.4GHZ or 5GHz) to the receiver and syncs it to the camera that’s recording your video.

The transmitter itself has a built-in microphone, but you can still connect a lavalier microphone (included) for convenience and aesthetics.

Setting up the microphone is easy. Just turn on the power of the transmitter, as well as the receiver. Connect the receiver unit to your camera using the TRS or TRRS audio cable, depending on which port your camera has. The LED status lights on both units should stop blinking and be shining solid. That’s when it’s paired and you’re ready to record.

The Maono WM820-A2 has a square rounded-off edge design, and is made fully out of plastic material. It’s lightweight and easy to carry around or to clip onto the user. It isn’t as bulky as some transmitters, so it’s great for travel or portable audio setups.

Each output port and buttons are well positioned, and the LED status lights are placed in a way that you will always know that edge is the right side up. There’s not much to complain about the design, really, as I’m more interested in how it performs. It’s black so it doesn’t stand out when recording videos, it’s sleek and lightweight, and it comes with a nice zip carrying pouch.

You must also be wondering, “How to differentiate between transmitter and receiver units?” Well, the transmitter has a 3.5mm audio jack and a mesh grille microphone, while the receiver has a 3.5mm jack for headphones and a port for “output”.

In terms of build quality, the Maono WM820-A2 is made out of plastic, so it does feel very light. However, having said that, it feels solid in the hands and there aren’t any shaking parts within the transmitter or receiver. All parts included within the box feels premium, and has a nice feel of quality with them.

I’ve been using the Maono WM820-A2 for a while now, and I will say it’s super easy to work with. Pairing is fast, setting it up was a breeze. And generally, I don’t have any complaints in this area. Convenience is really the keyword here for the Maono WM820-A2, and I think that’s one of its biggest highlight for the product.

When it comes to performance, we’ve tested audio recording with both a smartphone and a camera (Fujifilm X-T20). Do note that the volume up and down buttons also control the input gain. Meaning if you “turn the volume up”, you’re also increasing the sensitivity of the microphone to record louder audio with even more details in the background. The microphone does have an omnidirectional pickup pattern, so do expect it to pick up a bit of the room’s ambient sounds.

Using the Maono WM820-A2 with my smartphone, I had a bit of interference and experienced some clipping issues. It didn’t happen often, but there are certain times when the clipping is very apparent. The microphone does use the 2.4GHz wireless signal, so I thought I could just turn off my phone’s Wi-Fi signal to rid the clipping issue. It did improve a little, but there was still some interference.

Due to this, I’d recommend using the Maono WM820-A2 with a DSLR or mirrorless camera rather than a smartphone. In a pinch, you could use it with a smartphone, but your mileage may vary.

Moving on to trying the Maono WM820-A2 with my Fujifilm X-T20, the whole recording process vastly improved. I used the TRS cable, connected them together and I was ready to record. Usage on the camera was much better as there were no interference or clipping at all. Audio recorded was smooth, crisp, clear, and had quite a bit of bass too.

Another thing to note is that when you’re using the transmitter or using it with the lavalier microphone attached, be wary of lav rustle. That’s the friction sound that’s caused from the mic rubbing on your clothing. It isn’t too bad, just try not to move too much when you’re recording, and you’ll be fine.

As for distance coverage, Maono is claiming that the WM820-A2 is able to transmit up to 50 meters. And I’m happy to report that they’re right, but on one condition. For the microphone to transmit and record clearly up to 50m, you need to clear anything in line of sight. Nothing should be in between you and the receiver.

Testing it by going downstairs, or into my rooms, having walls as an obstruction between the signals, audio started dropping off, reconnecting, and drop off again. That only makes sense, as to how Wi-Fi would behave when it passes through walls too. Even when the distance got further, the recording quality didn’t drop as well, which is great.

Battery life hasn’t been much of a concern for me because mostly I use my mics indoor for YouTube videos. On a single charge, I could get about six hours of use. To charge them back up, they take about an hour and a half. And if I’m only using one transmitter, I can always swap with the second one when the first one’s out of power. The receiver draws power from the camera, so I’m not too concerned with that.

What’s nice is that instead of having to use three separate cables or to swap mics between charging, Maono included a 3-way USB Type-C cable to charge all three microphones via one single USB-A connection simultaneously. That’s pretty smart, actually and it’s a feature I really appreciate.

The Maono WM820-A2 wireless microphone kit is a great set for those who are just starting to get into videos/podcast, or for those who wants to go wireless. You can go with the Maono WM820-A2 first, and upgrade in the future when needed. I also noticed that the microphone would work even better if you’re using a device that has preamp control. It works great in terms of battery life, distance coverage, and the amount of useful accessories it provides. And for the price it’s offered at ($149.99), you can’t really complain when it does almost what the more pricier Rode mics do.