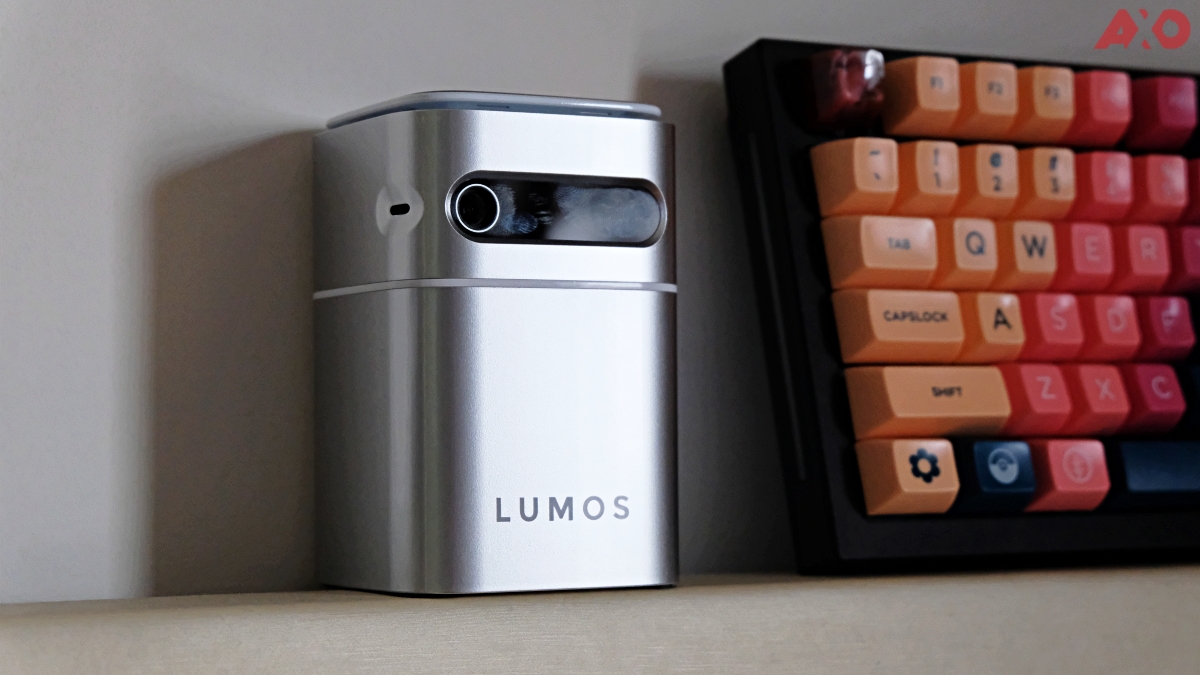 The LUMOS NANO is the third instalment in Lumos’ portfolio or home projectors, following the original LUMOS AURO and LUMOS RAY projectors. The original AURO was a larger projector that’s meant to be kept at home, while the RAY was a bit smaller and had some portability features built into it. And now comes the LUMOS NANO, which is made even smaller (as small as a 320ml can drink), and can be brought around just about anywhere.

Let’s see if the LUMOS NANO lives up to its predecessor’s performance, or will it suffer drawbacks because of its small size?

The LUMOS NANO is by far, one of the smallest projectors I’ve ever reviewed. Overall, it is as LUMOS claims, the projector is as small as a canned drink, albeit a little beefier on the sides and less cylindrical. It weighs a mere 400g, which is the weight of two smartphones and can easily fit into any backpack or luggage during your travels. I mention travel because of portable it is, but you can also use this at home or even in the office, as long as you have a clean/clear wall to project on.

The LUMOS NANO also has a few tricks up its sleeve to make it more user friendly. On the top, there’s a touch sensor panel which lets you control the volume, trackpad for navigation, and a navigation bar which consists of the menu, home, and back button ala Android. On the front, there’s the black bar which houses the projector lens, and the back holds the charging port, infrared sensor, an LED status light, HDMI port, and a USB Type-A port.

Right beside the projector lens, there’s the focus adjuster scroll wheel. On the opposite side, there’s the 3.5mm audio jack if you want to enjoy audio by yourself, as well as the power button (long press to turn on).

The LUMOS NANO does have these grilles as well, the smaller one near the ports for the exhaust fans, and the larger one below it for the built-in speakers. Not only that, the speakers can also be used independently, which means the LUMOS NANO can be just a Bluetooth speaker if you need it to be. On the bottom base, there’s a 3/4 screw hole for you to install the mini tripod (included), or your own (larger) tripod. There are also four anti-skid rubbers to prevent the projector from slipping.

Couple of highlights about the LUMOS NANO’s projection performance is that it has 1500 lumens, and can project up to 100-inches on your wall. That’s a whole lot bigger than most of the smart TVs in the market right now, and it’s portable so you can bring that 100-inch of content with you wherever you go.

Before we go into projection quality, you should also know that the LUMOS NANO has automatic vertical keystone correction, which is great for up and down correction when projecting from different angles. But, for horizontal correction, you’ll need to do it manually by turning off auto correction. From there, you can manually adjust the 4 corners of the screen. Do note that the more slanted your projector is angled, the smaller the maximum projection size you can get.

Projection quality wise, the LUMOS NANO does live up to its claim of a 100-inch, and it doesn’t lose much clarity or focus with the focus adjuster. I’m surprised it could offer this type of performance from such a small body, and this is very clearly exhibited when you’re watching YouTube videos or Netflix shows. As long as the NANO is setup on a stable surface (table/tripod), and the focus is done correctly, then you won’t have much to worry about the projection. Colour wise, it’s super vivid and it really shows when your surface is clean, and white.

In terms of the UI, it’s improved a lot from the LUMOS AURO. It’s a lot snappier, and navigation is more user friendly this time round. Everything is categorized better, and much easier to access. However, having a good UI means you’ll need navigation to be on par as well, right? LUMOS included a remote control to work with the NANO, which is a great as it adds another level of convenience. But, certain commands are slow and laggy, the keypress doesn’t register well and it’s like the cursor doesn’t know where to go. You can’t specifically highlight on certain buttons you want to press.

For example, in Netflix, you can go into a drama/show, and you can select the episode you want to watch. But because it doesn’t go to the specific play button for that episode, you can only press play on EP1 of the show. Eventually, I resulted in using a Bluetooth mouse with the remote control. The Bluetooth mouse for navigation and clicking of items, and the remote to turn on/off, as well as volume control. That’s an extra accessory on my part, but it improves the user interface tenfold.

Apart from that, everything else works quick and is easy to understand and use.

I’ve been using the LUMOS NANO for a couple of weeks now, for movies, games, and one day I even tried to work using the projector. It was a fun experience seeing all your emails blown up to a 100-inch screen in front of you. It’s really portable so I could bring it with me anywhere. All the buttons are well placed as they are easy to reach. The touch panel on the top is sensitive, but it’s hard to tell where the touchpad edges are. It would’ve been nice if there was a bump on the edge of the touchpad to better distinguish where to touch for controls.

The exhaust fan on the LUMOS NANO can get a bit loud, but after a while it just fades into the background, and the audio from your content would’ve masked it over anyways.

Watching Netflix shows and YouTube videos on it is great, but playing games on it is where it’s really at. I hooked it up to both the PS5 and Nintendo Switch, and gaming on a 100-inch screen is truly something else. Well, the projection may not be as nice as an OLED smart TV, but it’s the next best thing if you want large screen gaming. To put things into perspective, think playing games in a cinema and you’re sitting in the middle row of the cinema hall.

Lumos included a mini tripod stand with the NANO, and it works well in propping up the NANO as it does have extendable legs. But, because the projector does have a bit of heft to it, it can only be adjusted to certain limited angles.

Thankfully, the bottom base of the LUMOS NANO has a 3/4 screwhole, you can easily mount it onto other larger tripods that have the screw base. I attached it to the tripod I use for video recording, and it instantly gave the LUMOS NANO much better adjustability and ergonomics. I could make it much taller, lower when I want to project onto the ceiling, sideways if I’m projecting a smartphone screen. So, you can use the tripod given, or use your own, it’s up to you.

When it comes to connectivity ports, I think the LUMOS NANO lacks just one port in this area. It has a USB-A for things like pendrive, or connecting a peripheral. It has a HDMI port for connecting external devices to it, a 3.5mm audio jack if you wanna use a wired headphone/earphone. For everything else, you can always connect it to the NANO via Bluetooth. One thing I would’ve liked to see on the NANO is USB Type-C. Not only would USB-C be more universal for today’s charging standards, but it could also allow users to hook up faster devices like portable SSDs.

Featuring Dolby Audio, the LUMOS NANO does a great job in filling up the entire room with its built-in speaker. It may be just a single speaker system, but it has a nice stereo effect to it, especially when the projector is in front or behind you. When it’s placed adjacent to you, you can easily tell the audio is “slanted” and it’s not as appealing.

Audio quality wise, certain times it does sound a bit tinny. But, the highs are bright, and the mids are exceptional. This means better speech and dialogue from your movies and shows. As for the bass, it does have a kick to it but not too much. Plus, you could use the LUMOS NANO as a Bluetooth speaker on its own, so that’s a bonus.

On a single charge, it could continuously project content for about 2 hours and 15 minutes before shutting down. The battery life also largely depends on how loud the built-in speakers are playing at, and whether or not you’re utilizing the built-in Wi-Fi. You could save more battery if you’re connected to an external device (e.g. laptop), or if the audio was routed out through Bluetooth, or at a lower volume.

As mentioned above, USB-C would’ve been nice to have on the LUMOS NANO. That way, you could just share charging cables with your other USB-C devices and not having to bring another DC charger just for the LUMOS NANO on your travels. It has a small LED status light on top of the DC charging port too – red for charging, and off for when it’s fully charged.

For when you’re at home, and have a designated spot for the LUMOS NANO to project, you can always hook up the DC cable for constant power delivery. That way, you won’t have to worry about battery life.

As I come to the conclusion of writing this review, I still can’t believe how much the LUMOS NANO projector has to offer in terms of performance and features. Sure, it has a few drawbacks, but those can be remedied with small workarounds. For the price of RM1,499, I’d say it’s a pretty great deal considering it can be a stay-home projector, as well as a travel-with-me projector. Just think of all the places you could bring it to, and how you could utilize it in different spaces.

In this article:Lumos, Projector, Review