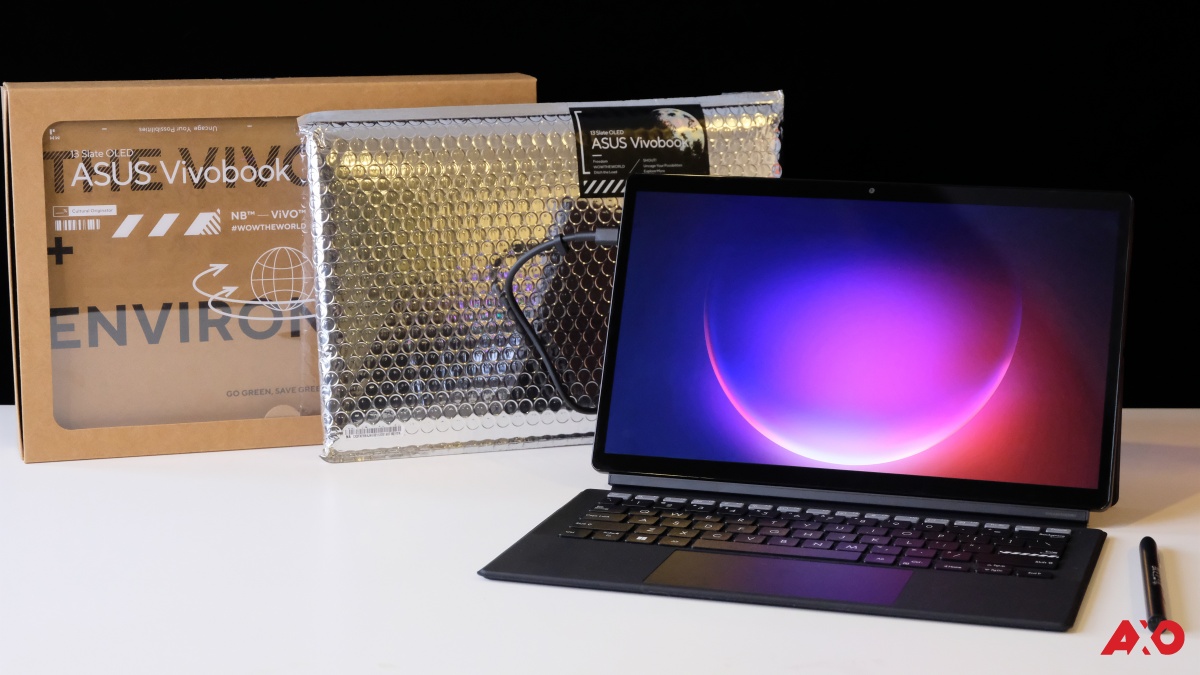 ASUS just launched the Vivobook 13 Slate OLED earlier this year, it is the world’s first 13.3″ OLED detachable laptop running on Windows OS. But is a detachable laptop enough to be used as both a laptop and a tablet? Let’s find out in this review.

The Vivobook 13 Slate OLED is detachable into 3 parts, the display, keyboard and the case stand. The display piece houses the main components like a tablet does. It features a 13.3-inch 16:9 OLED HDR display that supports up to 1920 x 1080 resolution. Being a OLED display allows it to provide a brighter and more detailed visual experience to enjoy your favorite movies or light games.

The display stand is a magnetized piece and detachable easily just by pulling it off. However, I personally feel like they didn’t have to make it a separate piece as you will be using it most of the time and you can just fold the stand in when not using which is not a big deal. Besides, you are not able to use the laptop with the keyboard without the stand as the display piece is not able to stand on its own.

The keyboard piece is also detachable magnetically and could be attached with just a snap. Without the keyboard piece, you can just use the virtual keyboard to type and touch screen to navigate around. Being detachable allows you to reduce weight when carrying it around.

ASUS added cool and young touches of fluorescent green details on the keyboard cover and also the cover chassis of the display unit. On the top side of the display, we have a power button that also acts as a fingerprint scanner. On the left, we have the volume button and the I/O ports on the right side of the display ( Micro SD card reader, 2 x PD charging port and a audio jack port). As much as we can add on a USB hub to the USB C port for more I/O ports, I would prefer to have a USB-A port readily available as most accessories still rely on a USB A connection port.

The ASUS Vivobook 13 Slate comes together with the all-new ASUS Pen 2.0 Stylus, this enables you to draw, paint, take notes and edit pictures with ease.

It also comes with 3 interchangeable pen tips(2H, HB, H and B) to meet the user’s writing/drawing preference. The ASUS Pen 2.0 Stylus is rechargeable by USB C and is able to last up to 140 hours of use. It also acts like a quick button via Bluetooth to do screenshots or to navigate around when you are presenting using the device.

The ASUS Vivobook 13 Slate is powered by Intel quad-core Pentium Silver N6000 along with Intel UHD integrated graphics. It is also equipped with 8GB LPDDR4X RAM and has up to 128GB eMMC and up to 256 GB PCIe SSD. If you are expecting to compare its performance than a standard laptop, I would say that it lacks the processing power to run heavy-duty task. The ASUS Vivobook 13 Slate is quite enough to get you through your daily needs like documents and watching movies on it. It has no problem handling productivity software and you multitasking to watch videos.

The Vivobook 13 Slate comes with the all new Windows 11 OS. The New window OS comes with shortcuts like swiping on the left of the screen to load the widgets panel and the right for notifications just like a tablet. In addition to that, the Windows 11’s built in Bridge Technology enables you to download and run Android apps seamlessly.

The device is also equipped with Dual Camera, one on the display and one on the back chassis. It has a 5MP camera at the front and a 13 MP camera for the rear. Having the camera allows you not only to capture images for creativity ideas on the go, it also comes in handy during video calls to show your environment to your friends and family during a call. Enhancing the video call experience would be the AI Noise-Cancelling Audio function where it supports 4 modes: off, Basic, Single presenter or Multi-presenter. Using a Single-Presenter mode allows the system to focus on a single presenter’s voice throughout the call/presentation and even filter out background noise or other human voices that are not supposed to be in the call.

When comes to battery life, the 50Whr battery is able to keep you going for 8 to 9n hours with a single full charge. Along with that the Vivobook 13 Slate OLED has a fast-charge function which you are able to charge it up to 60% in 40 minutes with the given 65-watt fast charge charger. Even without the original charger, the PD port supports charge with any USB C charger with a slower charging rate but it comes in useful during emergencies.

The ASUS Vivobook 13 Slate is now available to purchase for RM 3,499 and can be purchased through Shopee or any official ASUS distributor stores. I would say that the price is rather reasonable given that it comes with a detachable keyboard and stylus right out the box. Not only that, there are not many portable devices such as this one that supports Windows 11 as of now even more with a OLED display that is sought for in the market to suit consumer’s demand for better visual quality.