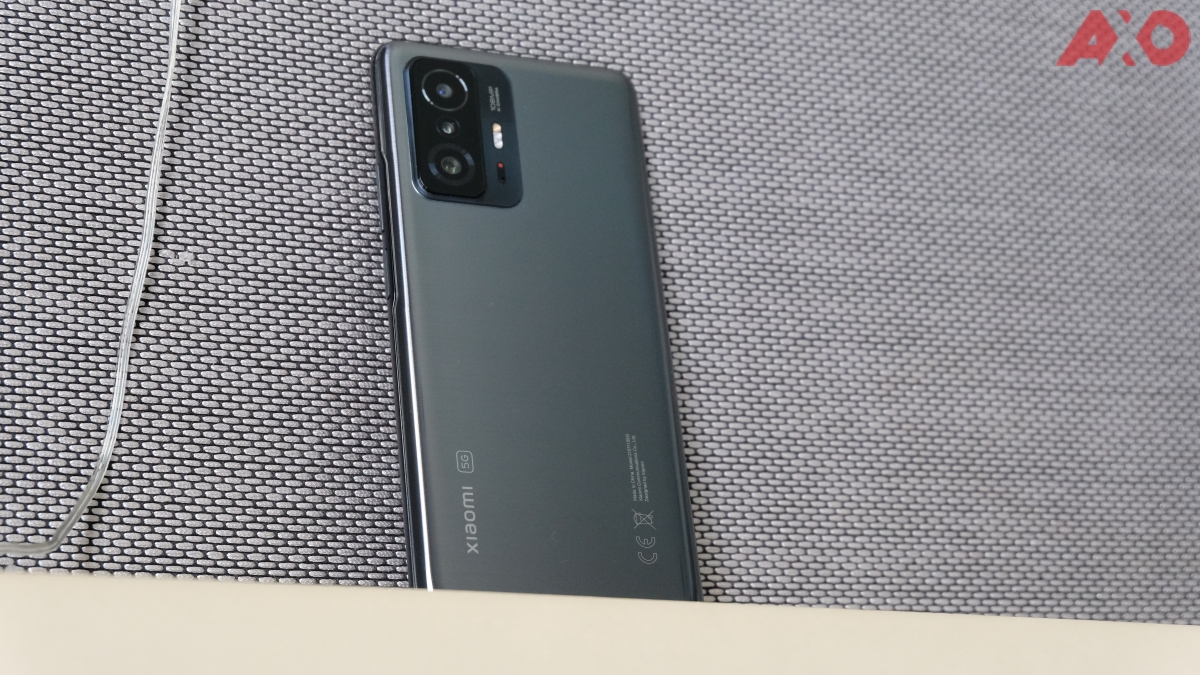 The Xiaomi 11T Pro truly lives up to its name, by offering Pro level performance and truly blazing charging speeds, all at a fraction of the price of a flagship device. While on paper the specs look impressive, some parts of the phone does feel a little lackluster. Before we get into the nitty gritty, let’s check out some specs, shall we?

Unfortunately, in our reviews we’ll always start with design, and I’m not impressed. Xiaomi could’ve used more time to give the Xiaomi 11T Pro a little more finesse and touch of elegance. It’s a large phone, thanks to its wide design, and it’s quite thick at 8.8mm. In terms of weight, it’s a bit hefty too at 204g. I don’t really mind the weight, but what I mind is that it’s wider instead of taller. There’s more scrolling needed, and it’s harder to use the phone single handedly.

On the right, you have the volume button and power button that has the fingerprint sensor embedded within. The top has one out of two of the dual stereo speaker system grille, and the bottom has the other, along with the USB Type-C port. The bezels on the front display aren’t that thick, so it still gives a nice screen-to-body ratio.

The mirror back might look great to some, but not to me. It attracts a tonne of fingerprints and most of the time I just have the casing slapped on so I don’t see any of it. Aesthetically, the phone doesn’t look as good as I’d hoped, but at least it stays true to the saying “It’s the inside that counts”.

As mentioned above, the Xiaomi 11T Pro has a wider screen, but a large screen nonetheless. It’s amazing how much real estate you’re getting, media consumption just feels really gratifying when you’re doing it on this device. I absolutely enjoyed playing games and watching YouTube videos on the 11T Pro. Pair that huge AMOLED display with a high 120Hz refresh rate, that’s flagship smartphone experience right there.

Image quality wise, the screen has vibrant colours and just the right amount of brightness to allow for better clarity under harsh sunlight. You can see the crispness in the details, and the deep blacks from the AMOLED panel, despite only having a FHD+ resolution. On top of that, the screen size really helps with the immersiveness of the device.

After using the phone for a couple of weeks, the Xiaomi 11T Pro definitely took some time to grow on me. Initially, I really didn’t like that the phone was wider than the phones I’m used to. Couple days later, I’ve grown to live with it. Then, came the back design, which I didn’t like having to constantly wipe fingerprint smudges down, so I put on the casing to irk me less. The Xiaomi 11T Pro’s camera bump is quite thick, so it does wobble when you put it on a flat surface.

It’s nice to hold, and is comfortable in the hands, but the mirror back does make it quite slippery from time to time. The volume and power buttons are placed just nicely where my thumb can reach them, and the speakers are also placed higher (in landscape mode) so they won’t be muffled when you’re using the phone horizontally.

It’s a large device to place in my pocket, but the heft gives me reassurance that the phone is still there. With that out of the way, I finally got to enjoy the phone for what it really has to offer – performance.

Running on Qualcomm’s Snapdragon 888 processor, the Xiaomi 11T Pro zooms past any task I throw at it. Navigation is smooth, app switching is quick, loading apps are a fast process, and everything just feels buttery smooth to be done on the phone. Equipped with 5G capabilities, this also future proofs the phone for when 5G networks are deployed in Malaysia. Its performance is also further backed up with 8GB of RAM and 256GB of storage (no microSD card expansion).

In terms of gaming, the device is capable of handling CoD Mobile at maximum settings. Even Genshin Impact could play smoothly at Highest settings at 60fps. But with that much graphic demand, the phone did get a bit warm, which is expected for a non-gaming device like this.

Here are the benchmark tests we ran on the Xiaomi 11T Pro with GeekBench 5 and 3DMark:

When it comes to the Xiaomi 11T Pro’s camera, it houses a triple camera system that is headlined by an impressive 108MP main sensor. Shots taken had their details punched up, but could still retain lots of details. In well lit environments, the smartphone’s AI Shot Assistant can definitely take amazing shots with rich contrast and nice depth.

The 8MP ultra-wide angle sensor on the other hand takes fuzzier photos that has a more warm tone. But on the bright side, you get a 5MP telephoto sensor that’s capable of 2x optical zoom for better close up shots. It doesn’t have the dynamic range of the main sensor, but it gets macro shots right though.

For night shots, pictures come out bright, but there are a bit of noise captured too. There is no OIS, so you’ll have to be extra steady when taking photos in darker scenarios.

Here are some photo samples we took with the Xiaomi 11T Pro:

In terms of sound, the Xiaomi 11T Pro’s dual stereo speaker system does an amazing job at producing loud, clear audio. The highs are decent, and the mids are great for improved vocals, and you still get a nice clean low frequency, thanks to the Harman Kardon tuned speakers. Because it has a stereo setup, audio sounds more even with a slight surround sound effect when listening to in-game sounds, or watching movies.

Powering the Xiaomi 11T Pro is a 5,000mAh battery, and pairing that with the 120W charging speed, your downtime is practically zero. On the battery itself, it didn’t last as long as I thought it would. On a casual day of no work, by 5PM, battery levels were already down to 50%. I’ve never been able to last two days on a single charge.

However, with the 120W Xiaomi Hypercharge charger, I was able to quickly get back up to speed in less than an hour. To be exact, 20 minutes from 1% to 100% battery. Do note that this only works with the 120W charger provided in box, and other chargers like the GaN 65W chargers will only cap charging speeds at 65W (makes sense right?)

The Xiaomi 11T Pro is a more premium midrange device that offers flagship level performance. The same cannot be said about the appearance, but that’s something that can be improved with a nicer third party casing. The Qualcomm Snapdragon 888 processor does an amazing job handling the workload, while the 120Hz AMOLED panel showcases all that with buttery smooth visuals and animations from MIUI 12.5 based on Android 11.

If you’re someone who dislikes wide phones, this may not be the phone for you. But if performance and reliability is all you care about, the Xiaomi 11T Pro should already be in your hands as we speak.

Many fans got excited when Samsung has teased their latest Galaxy S flagship smartphone in the Galaxy Unpacked teaser video. The launch is happening...