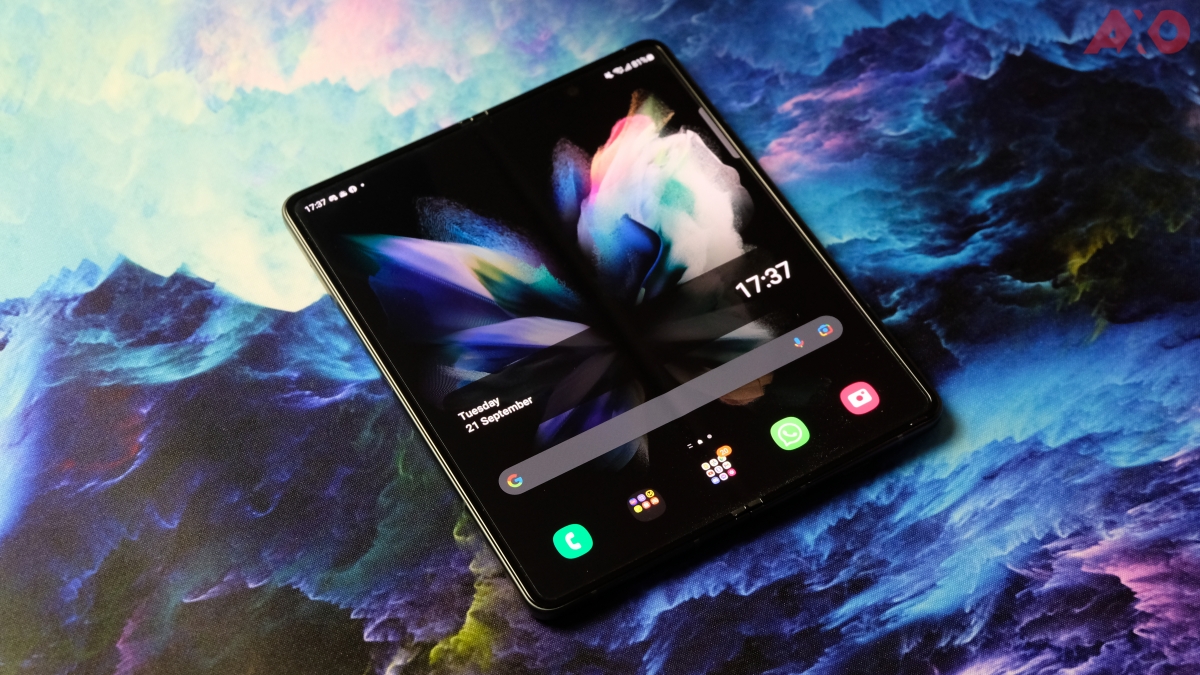 The Samsung Galaxy Z Fold3 5G is Samsung’s latest iteration of their foldable series, launched alongside the Galaxy Z Flip3 5G. Obviously, the Z Fold3 is the larger sibling, unfolding from a smartphone to a larger tablet-sized device, carrying the latest hardware, furnished with the latest minimalist design cues from Samsung. It has an even more durable design, S Pen support, and better multitasking too. But before we get into the review, let’s check out the specs.

Similar to the Samsung Galaxy S21 series, the Z Fold and Z Flip series this year does not come with any casings or charging adapters, and only the SIM pin with a USB-C to C cable is included. So if you are the clumsy type that might drop your phone on the first day of having it, you might want to get the official phone casings from Samsung, or an aftermarket one to protect your device.

Design wise, the Samsung Galaxy Z Fold3 5G is truly a marvel to look at. It’s seamless, has an elegant touch to it, and it doesn’t look as thick as it may appear to be. When folded, you get the 6.2-inch display which looks and feels like a smartphone display, albeit a lot narrower and taller.

On the left, there’s the new and improved hinge which allows for Flex Mode to happen, as it is firm and sturdy. Although, dust can still collect within the crevice, but is minimized, according to Samsung. On the right, you will find the SIM tray slot on the left half of the device, while the power and volume buttons can be found on the right half. The fingerprint sensor is still embedded into the power button, and it still does have the slide down for notification bar expansion feature. Moving to the back of the device, there’s the triple camera system with the LED flash module right below the sensors. The camera bump isn’t too thick, it still does wobble when you use it on a flat surface, but acceptable still.

On the top of the device, you’ll find the first speaker grille, and the second would be placed on the bottom, along with the USB Type-C port for charging. Of course, when used in landscape mode, these speakers would turn into a left-right stereo setup instead of up-down.

But when you unfold it, that’s where the magic happens as you get greeted with a much larger 7.6-inch Infinity Flex Display, complete with the Under Display Camera. That means no punch hole, but you can still somewhat see where the camera is located.

The Samsung Galaxy Z Fold3 5G has two displays, a 6.2-inch on the Cover Display, and a 7.6-inch on the inside, both of which are Samsung’s Dynamic AMOLED 2X panels, and both have a 120Hz refresh rate. The Cover Display features a taller 25:9 aspect ratio, protected by Corning Gorilla Glass Victus, while the main display supports HDR10+ and a peak brightness of 1,200 nits.

I’m really glad Samsung decided to show some love for the Cover Display as they now both come with adaptive 120Hz refresh rate screens. The main display also looks stunning, especially with the notch cleverly hidden under the display. You can still see where it is, but most of the time, it isn’t really noticeable. After a while, it just blends into whatever content you’re viewing.

Unfortunately, I did feel like the Z Fold 3’s display isn’t as bright as I hoped it would be. I felt the S21 Ultra was a lot brighter, and even the Apple iPhone 12 Pro Max was slightly brighter than it too. However, for daily use, it’s definitely sufficient.

Being an AMOLED screen with a 120Hz refresh rate, both displays look great with surreal colours, and great clarity. Scrolling, navigation, and multitasking experience was smooth and enjoyable too.

I’ve been using the Galaxy Z Fold3 5G for a couple of weeks now, and I must say it’s grown on me. I used to think i won’t like the phone’s thickness and how troublesome it would’ve been to fold and unfold the phone. But after spending some time with it, it’s became second nature to me, and most of the time I was on the main display more than I was on the cover. It was just easier to navigate and go through things on the larger main display.

When i was using the cover display, I did feel the phone was a bit too thick for my liking. But after a while, the heft just disappeared into the background and I didn’t really feel much of it anymore.

The hinge is firm and secure, and it has a very reassuring heft to it. It’s sturdy, and holds its position really well in flex mode. When you close the device, when the two lids touch, there’s also this very satisfying thud to it.

The Samsung Galaxy Z Fold3 5G also uses its dual-screen flexibility to its maximum potential with small little features that go a long way. You’d think this whole foldable mechanism is a marketing gimmick, but it really isn’t. After releasing the original Fold, Samsung is doubling down on foldables this year with the Fold3 and Flip3, and we think Foldables are here to stay for a while.

Samsung enhanced the features already available from the first Fold, and made them even better, smoother on the Fold3 5G. Splitting the camera UI into two parts, YouTube video viewing into videos and comments, document processing into document and keyboard, and etc. You may not think much of it at first, but when the feature kicks in, you’ll be thankful Samsung included them.

As expected of a smartphone that runs on Qualcomm’s latest Snapdragon 888 processor, every action on the phone feels fast and zippy. Pair that with the 120Hz adaptive refresh rate, navigation is all-around smooth, making the phone’s already fast animations, faster. I’ve never had a moment of hiccup, not even when I’m switching screens from the cover to the main, and back to the cover. Even when the UI changes into Flex Mode screen layouts, the transition is smooth and less jittery.

I have absolutely no complaints when it comes to the overall phone’s performance. For a flagship level pioneer device, it’s only right to have the latest hardware powering its latest features to ensure maximum productivity.

In our benchmarking tests, it comes as no surprise that the device achieves high scores all around. Here are the results for the Samsung Galaxy Z Fold3 5G:

The camera on the Samsung Galaxy Z Fold3 5G may seem a little underwhelming on paper, but its real world performance is definitely commendable. Having a triple camera system consisting of a 12MP main sensor, a 12MP ultra-wide angle sensor, and a 12MP macro sensor, the phones sure knows how to take some really awesome shots, provided there is enough daylight.

The camera bump isn’t really thick, and I’m really grateful for that.

There are so many ways for you to use the cameras available on the smartphone. The cover display has its own selfie sensor, and the main display has its own too. Or, you could even unfold the phone and the rear camera system as the main sensors, with the cover display as your viewfinder. Or, you could just use the plain old main display as your large ass viewfinder, which I still find till this day, a guilty pleasure.

Here are the sample photos taken with the Samsung Galaxy Z Fold3 5G:

In the audio department, the Samsung Galaxy Z Fold3 5G does an amazing job at producing music with great soundstage, depsite being “just smartphone speakers”. Having a dual speaker stereo setup, no matter what type of music or content you’re listening to, you’d definitely be having the full experience, regardless of the orientation the phone is in. The highs are relatively bright, the mids are decent, and there’s quite a bit of bass too for that thump in EDM or dance tracks.

Admittedly, holding the phone in unfolded mode and answering a call isn’t really ideal, cause the phone’s rather… big. Unless you were using a pair of TWS earbuds, then you’re fine.

The Samsung Galaxy Z Fold3 5G has an impressive battery life, but when it comes to recharging it back to life, it’s a little lacklustre. Its charging speed is only capped at 25W, but according to Samsung, this is to ensure the phone is always charging at safe speeds and wattage to protect the user and the environment. On a single charge, it could last me the entire day, even if i’m mostly using the main display. I’ve tried using the phone entirely on the cover display only, it could last me up to almost two full days of usage, which is pretty awesome.

The Samsung Galaxy Z Fold3 5G has got to be one of the most interesting foldable flagship of the year, even though there isn’t much competition to begin with. There’s the Huawei Mate X1, but that’s on a relatively higher price point, the new Motorola Razr and its own sibling, the Galaxy Z Flip3 5G.

Right now, the Z Fold3 5G is offering quite the value with its flagship level hardware, foldable novelty, and innovative software experiences. For the price of RM7,999, we think it’s definitely keeping in your KIV/wishlist. Or, you could just go YOLO and get into the foldable scene right now here.

Advertisement. Scroll to continue reading.
In this article:Foldable, samsung, smartphone