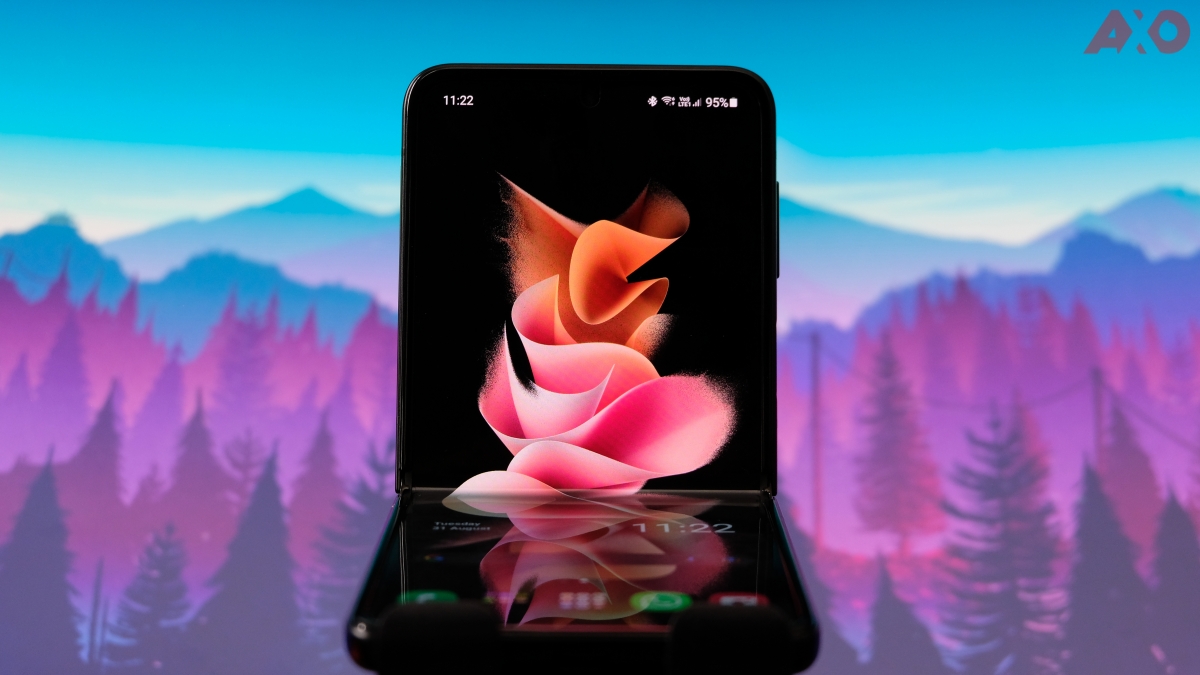 The Samsung Galaxy Z Flip3 5G is running on Qualcomm’s latest Snapdragon 888 processor, paired with 8GB of RAM, and up to 256GB of storage. With the lower storage capacity (128GB variant), this also makes the foldable have a lower entry price point, and that’s great for whoever has been interested in getting into the foldable space. It’s lightweight at only 183g, and its display is a 6.7-inch Dynamic AMOLED 2X panel with 120Hz refresh rate.

In the camera department, the Z Flip3 5G has a dual camera setup that consists of two 12MP sensors, one being a wide angled one, and the other an ultra wide angle sensor. Inside the phone, housed in the Infinity-O notch, there’s a 10MP selfie sensor.

Compared to its predecessors, the Z Flip series get a major upgrade with the third iteration device. It now has truly flagship level hardware, impressive performance, and from the initial tests done for the full review, we’re liking what we see.

Upon unboxing the device, the Samsung Galaxy Z Flip3 5G was already unfolded and I thought it would’ve been cooler if the device was closed in the packaging. That way, during the unboxing process, users would also get to experience that first opening of a foldable, especially to those who are new to the form factor. That would’ve heightened the entire experience, in my opinion.

Removing the plastic and adhesive strips around the device, I got to feel the matte finish on the black chassis of the Z Flip3, and it feels smooth. If I’m not mistaken, only the green, pink, and black models have the matte finish, while the rest of the colour variants have a reflective glossy finish. I personally prefer the matte finish as it looks cleaner due to it being more resistant to fingerprints.

Next in sight was the dual camera setup and the much larger cover display on the exterior/top half of the device. The lens are pretty big, but there’s barely any camera bump on it which is great. You can unfold the device with one or two hands, but trust me, it’s very hard to do it single-handed. You’d either need to flip it hard, or press the top half against your stomach, or force your thumb through it and end up holding the phone in the middle in an awkward position.

The most asked question would have to be the crease in the middle of the phone’s display, right? Don’t worry, we’ll get to that. Unfolded, the phone has a 6.7-inch AMOLED panel that’s tall and narrow, which is right up my alley. This makes the phone show more content diagonally, and requires less scrolling from my thumb. The bezels surrounding the display are fairly thin, but they do have a small bulge. The bottom corners also get a small bump to protect the device when it’s folded down. The top half has three cutouts for the earpiece and the second speaker on the phone. In the middle, there’s the Infinity-O notch which houses the 10MP selfie sensor.

Moving to the center of the Samsung Galaxy Z Flip3 5G, there’s the hinge mechanism on the sides and yes, the crease area does still have visible lines. But, this time around, it’s a lot more subtle and well hidden. You’d only be able to see it if you angled the phone a certain way, or under a certain lighting angle. Samsung has done an amazing job at hiding a crease, even though we know it’s unavoidable at this point in time.

When the device is unfolded and in full flex, you can’t even tell it’s a foldable device. Samsung made it so well that the form factor doesn’t feel too different from their standard candy bar devices, yet they’ve added the benefit of halving it down to fit even better into your pocket. The novelty of having a foldable smartphone is still there, every time you fold the device back down or flex it open, eyes are still turned, and it’s just really self-gratifying.

Of the two devices, I personally feel the Samsung Galaxy Z Flip3 5G is the device that’s a true game changer. It’s just too interesting to pass up on, and it’s elevated the foldable scene by quite a few levels. It has a lower entry point into the form factor, amazing modern hardware, a more refined design, and updated display(s) that’s more fitting for today’s standards.

Our full review of the Samsung Galaxy Z Flip3 5G is in the works and it’s coming up soon, so stay tuned to The AXO for that! If you’re already set on getting one, you can do so by checking out the link here.