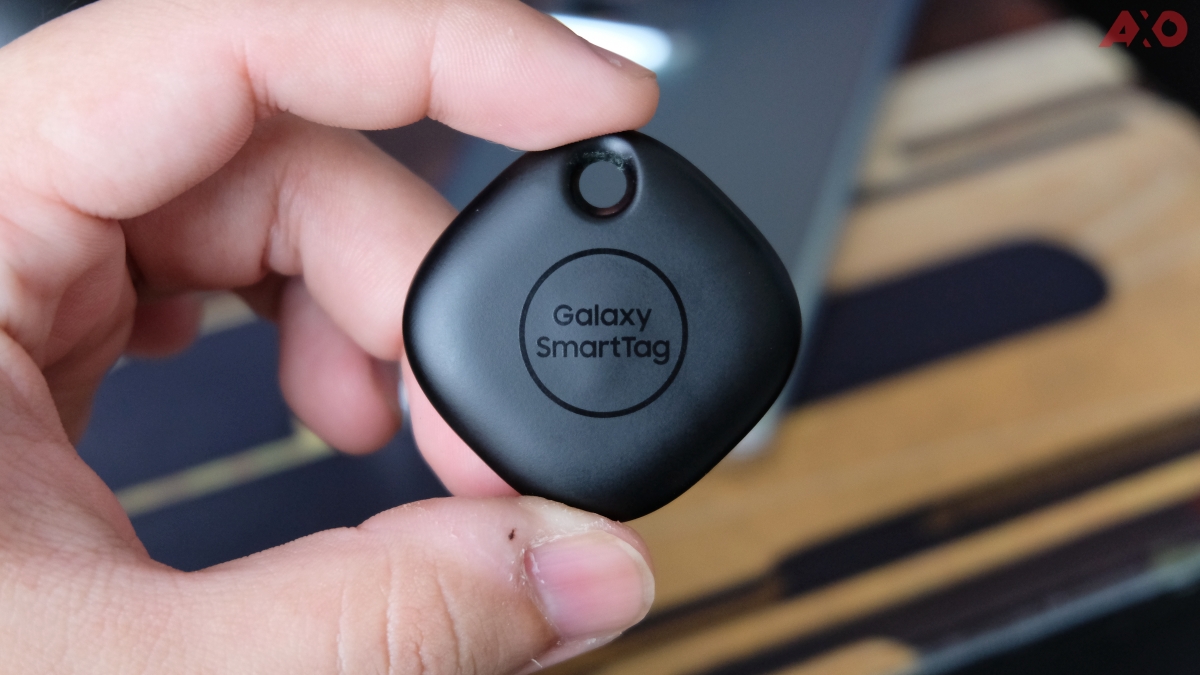 The Samsung Galaxy SmartTag was launched in efforts to expand the company’s ecosystem of connected devices. It is a Bluetooth-powered tracker, and while it’s not the first of its kind, it does have some merit to it, as well as some demerits.

The Samsung Galaxy SmartTag is smaller than most TWS earbuds’ charging cases, and it fits just nicely in the center of your palms. The material is made soft to the touch, and there’s also a key ring on the top which allows you to easily attach it to your daily items you wish to track. These items can include backpacks, dog/cat collars, it’s up to your imagination, really.

Because of its 1cm thickness, it doesn’t really fit into your wallet, so that’s one item ruled out for tracking. The tracker does have a bulge in the middle, and that’s also where a button is placed. When it comes to maintenance, the Samsung Galaxy SmartTag can be easily snapped open to replace its CR2032 battery, and it also has an IP53 rating for dust and water resistance.

The Samsung Galaxy SmartTag is a straightforward product with just one goal in mind – to help you track items you’ve misplaced. It does its job of tracking very well, but this only applies to Samsung smartphone users. If you’re using any other Android smartphone, or an iPhone, the Galaxy SmartTag won’t work.

If you’ve already been planning to get a Samsung smartphone, then the Samsung Galaxy SmartTag is an accessory worth considering. It is also controlled with the SmartThings app.

To set up the Samsung Galaxy SmartTag is actually quite easy. Just launch the SmartThings app, and the app will automatically detect the SmartTag. Next, just track the item you’ve misplaced by making the tracker ring through the app. Apart from that, if you have the tracker but not your phone with you, you can use the tracker to make your phone ring by double tapping on the SmartTag’s button.

The key to the Samsung Galaxy SmartTag is its “ringing tone”, and Samsung has 10 choices of tones for you to choose from. These tones can go up to 89db in volume, and it’s actually so loud, it’s impossible to not hear it.

Utilizing Bluetooth technology, once you’re in range (18m), there’s a signal strength meter to locate your misplaced item if you can’t hear the tone. The meter’s strength does increase when you’re closer to the tracker, but this isn’t as accurate as it can sometimes be a hit or miss. Once you’re outside of the 18m effective Bluetooth range, the app will show a five minute timer where it continues searching for the tracker.

The Samsung Galaxy SmartTag is capable of showing the last location of the tracker on a map, when it was last connected to a smartphone. Unfortunately, real-time tracking like you see in movies isn’t available, so our idea of sending the SmartTag on a shipping courier journey didn’t work out.

Seeing how many Samsung Galaxy smartphone users are out there, the company is using its customers to help you find your lost tracker/item. The tag does emit a Bluetooth Low Energy signal which other Galaxy devices with the SmartThings app nearby can detect.

For instance, if you left your messenger bag at a cafe, the location of the tracker will be updated automatically in the app when someone else passes by. According to Samsung, the user data used by SmartThings Find is fully encrypted and securely protected.

The few limitation I see with the Samsung Galaxy SmartTag is its size, and its restriction to Samsung devices only. The tracker was a little too big for my cats, and it would only benefit users who are already within the Samsung ecosystem. No doubt the Galaxy SmartTag was given as a pre-order incentive with the Galaxy S21 series, but if you tend to change smartphone brands often, it makes more sense to use a tracker that is compatible with all smartphones.

That being said, the Samsung Galaxy SmartTag is loud, has decent tracking, a replaceable battery, and can function as an IoT remote. Being a first generation product, it already has a whole range of features up its sleeves, but we’ll definitely see an improved version in the future, which is the Galaxy SmartTag+ – an advanced version equipped with UWB technology.

By supporting UWB positioning, the tag will provide a more accurate positioning of the tracker when used with a UWB-compatible device like the Samsung Galaxy S21 Ultra or the Galaxy Note20 Ultra.

In this article:samsung, Smart Tag

Samsung has announced the arrival of Galaxy A04s, a smartphone from Samsung’s entry-level range. The Galaxy A Series is designed to give customers the...

It has been almost 3 years since Samsung made a splash with their foldable phones, and now the latest Samsung Galaxy Z Flip4 are...

The Samsung Galaxy Z Flip4 is now on store shelves and to say people are hyped is an understatement. Ever since Samsung brought back...