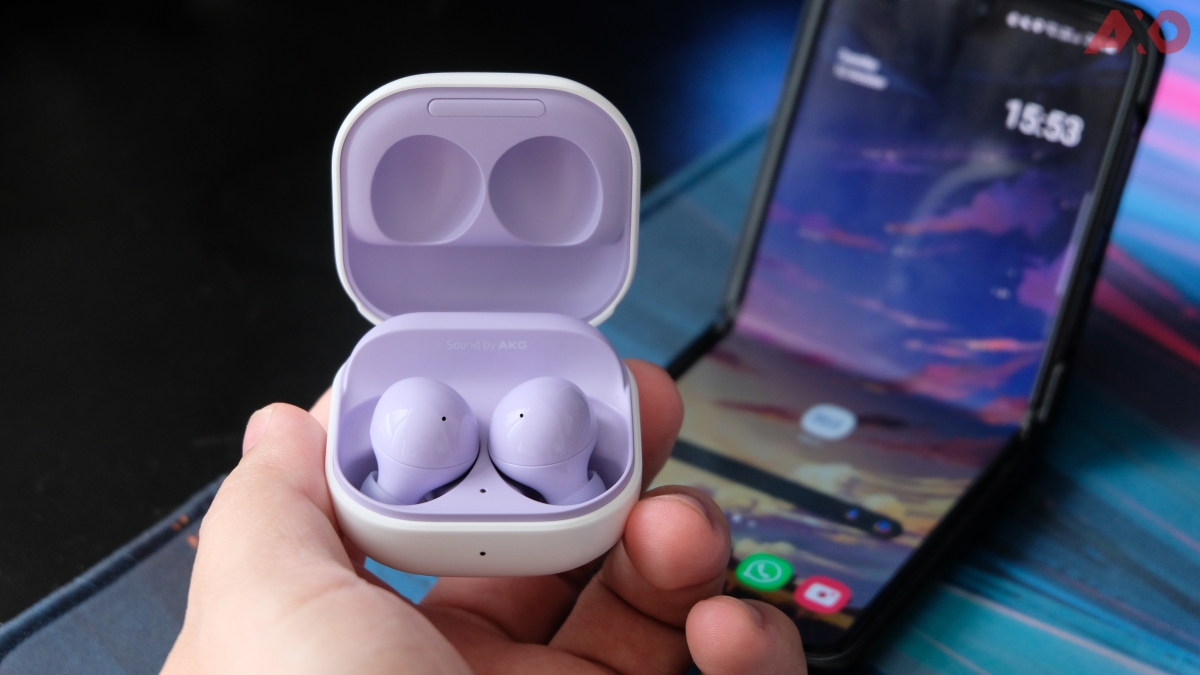 As mentioned before, the Samsung Galaxy Buds2 gets a redesign to have a glossy exterior and a matte finish on the inside of the charging case. As for the earbuds themselves, they’ve foregone the chrome finish from the Galaxy Buds Pro and went for a glossy, well-rounded design instead. This does give the earbuds a more modern, lifestyle aesthetic too.

Apart from that, not much has changed. It’s still using an in-ear design, and it still uses the same frame from the Galaxy Buds Pro for the charging case. It still supports wireless charging, with the USB-C port on the rear, and the status LED on the front. All colour variants of the Buds2 can only be differentiated from the earbuds and the internals of the charging case.

After using the Galaxy Buds2 for a couple of weeks, I actually preferred the matte finish on the charging case than the glossy one. It’s slippery, and a bit hard to open at times. That being said, the earbuds are easier to retrieve from the charging case due to its increased height. I’m also still pleased Samsung kept the wireless charging module in the Buds2.

When it comes to comfort, comparing it to the Galaxy Buds Pro, the Galaxy Buds2 are leaps and bounds more comfortable. Not to downplay the Buds Pro, but the Buds2 really improved on the overall comfort level, even when it’s been used for prolonged hours.

It stays in the ears, and does not slip out easily. In our headbanging test, the Buds2 survived the test with flying colours. Even when we brought it to our Nintendo Ringfit sessions, no amount of sweat could bring it out of my ears.

Because of how large the touch surface is on the Galaxy Buds2, touch navigation has never been a problem for me when it comes to changing songs or answering calls. The touch sensors are responsive, and I’ve never had any mistouch before. At first, it was a bit hard to figure out the default touch controls. It was only until I paired it with my Galaxy Z Flip3 5G that I knew what controls were available.

Speaking of the app, the Galaxy Buds2 connects to your smartphone via the Galaxy Wearable app, and that’s where you can customize parts of the Buds2, including firmware updates, audio settings, and touch controls as well. Pairing the earbuds to your smartphone is a very easy process, especially if you’re already using a Samsung smartphone. The next step is to just open up the Galaxy Wearable app, and it will automatically detect and pair them up instantly.

The app is straightforward to use, and it has a clean design for easier navigation through the app. Once you’ve set up the audio and touch settings, performed the firmware update, you pretty much won’t need the app anymore.

In the sound department, the Samsung Galaxy Buds2 offers great sound with decent ANC performance. The highs are clearly bright without any distortion at loud volume levels, the mids do sound a bit underwhelming so when it comes to vocal performance it’s a bit soft. But when it comes to bass, it gives a nice, clean thump regardless of the music genre you’re listening to. Soundstage is great too, as the frequencies don’t drown each other out, and you can clearly distinguish them.

For the ANC, it’s not the best as I can still hear a little of my surroundings. But, it still does a good job of cancelling most of the ambient noises when paired with about 50% volume of music. With no music playing, I can still hear the snapping of my fingers. But, the ambient noises surrounding me got totally canceled out, which is amazing. With Spotify on, everything else just gets cancelled out so you can stay in your element and enjoy your music.

In Ambient Mode, the mic does a really good job at picking up sounds, especially vocal. I was quite surprised with how well the ANC was implemented, it kept ambient noises audible but low, and dialogues boosted, which is what ambient mode should be like, in my opinion at least.

Call quality is good and clear with good volume. There seems to be more focus on the highs and mids, which means better dialogues and decent lows for more depth. No complaints at all in this department.

When it comes to battery life, on casual use, the Buds2 could offer up to two days of use. If I were to use them for business meetings and online conference calls with ANC on and volume at 50%, it could last up to 5 hours before needing a recharge in the charging case. That’s pretty alright, considering I can use them in the morning, pop them back in for a charge during lunch break, and continue using them in the afternoon till work ends.

At the same volume level with ANC off, it could give me up to two extra hours of battery life before needing to recharge. Another good thing about the Buds2 is that it still supports wireless charging, and with just five minutes on the wireless charger, it could give up to one full hour of use, which is awesome if you can only manage a quick charge before needing to get back on the road.

The Samsung Galaxy Buds2 went through a great minimalist redesign, which I’m all for. The fact that it now provides even better levels of comfort is welcoming, and I’m truly liking Samsung’s aesthetic game when it comes to their Buds series.

For the price of RM499, you’re getting lightweight TWS earbuds that don’t just look good, but sound good as well. You’re getting even better features if you’re already within the Samsung ecosystem, and you can’t really go wrong with ANC capabilities.

In this article:audio, Review, samsung, TWS

Many fans got excited when Samsung has teased their latest Galaxy S flagship smartphone in the Galaxy Unpacked teaser video. The launch is happening...

It is official! Samsung has finally teased what seems to be the Galaxy S23 smartphone in a video today. For the first time in...