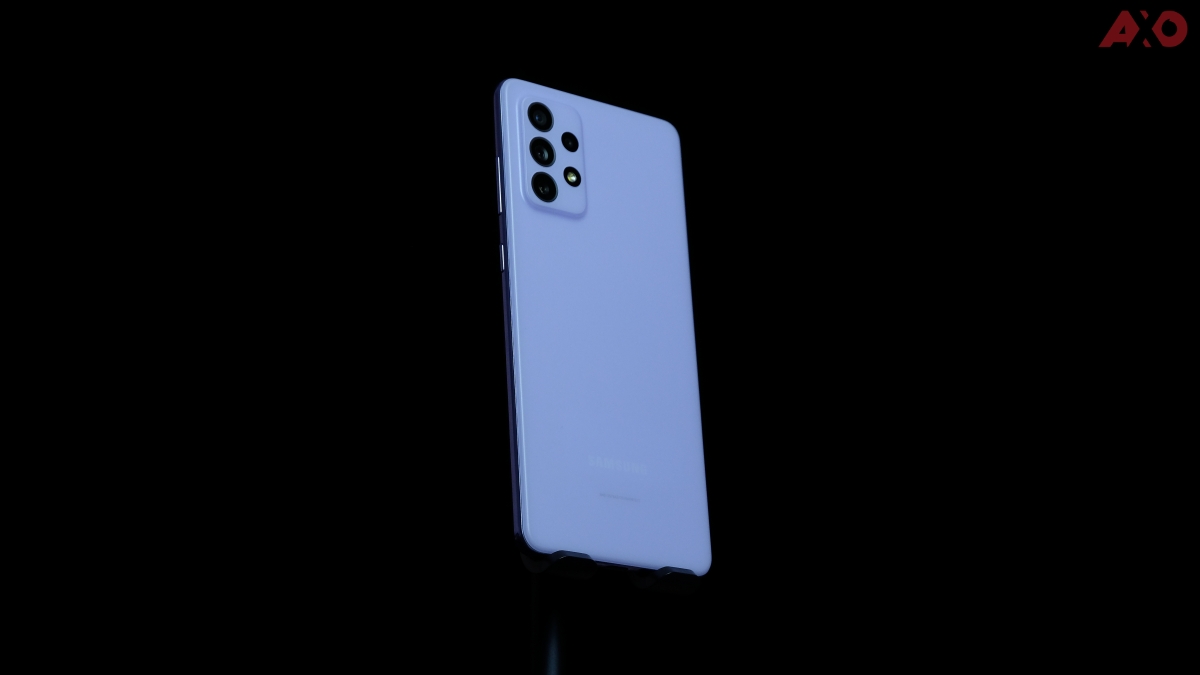 The Samsung Galaxy A72 is the successor to the original Galaxy A71, which also makes it the latest device in the Samsung Galaxy A series. Dubbed as “Awesome for Everyone”, we think the slogan does ring true as the device does carry some great features this time around. But the question here is, are they any good? Let’s check out the specs first, shall we?

The Samsung Galaxy A72 now features a more minimalistic design, that takes a little of the aesthetic cues from the Samsung Galaxy S21 series, particularly the rear camera layout. It features the same positioning, but the camera bump has a smoother transition to the rest of the back of the chassis, rather than a clear cut like the S21 series. To me, this actually looks better because at certain angles, the “bump” just cohesively blends into disappearance.

Our unit dons the “Awesome Violet” colour, and it has a matte haze finish. It provides a good, yet smooth grip, and the best part is, fingerprints are not at all visible. There actually is the Samsung logo on the bottom half of the phone, but it has a subdued white colour which further gives the phone the sleek and chic, minimalist look.

The power and volume buttons can be found on the right side, while the SIM tray is located at the top left of the device. On the bottom, you’ll find the 3.5mm audio jack, USB Type-C port, and the speaker grille.

The Samsung Galaxy A72 has rather thin bezels, and it comes with rounded edges on each corner to better fit the Samsung OneUI 3.0’s UI design. On the top center, there’s the small Infinity-O notch that houses the 32MP selfie sensor.

The colour reproduced on the screen is really punchy, but it does have slightly lean towards a warmer tone. The device can get really bright, and I’ve had no problem looking at or reading content under direct sunlight. The auto-brightness responds fairly well, and is not too aggressive.

The A72 may not have jumped on the 120Hz refresh rate bandwagon, but I’m glad they took the first step of having 90Hz refresh rate instead of the standard 60Hz. On that note, while it may only have 90Hz, it uses an AMOLED panel which makes the refresh rate much more efficient than a 90Hz on an LCD. Because of that, navigation on the device is smooth and transitions have a nice flow to them.

The Samsung Galaxy A72 is a mid-range device that honestly feels like a flagship. It certainly looks like one, and the overall user experience just blurs the line between mid-range and flagship. It packs several features taken from flagship devices, and it does give the A72 an edge over its competitors.

The device feels thin and light, so it’s not much of a burden in your pocket or handbags. The power and volume button seems to be positioned a little on the high side, I wish it would’ve been lowered down to where my thumbs naturally rest. As for the camera bump, it does have a bit of thickness. But when placed on a flat surface, there’s very minimal wobble and you can definitely use the phone with no “sliding” issues.

Another thing I really appreciate about the Galaxy A72 is that Samsung allowed the double-tap to wake and lock feature. This is an extremely useful feature for me, especially when my hands are busy with something else. In terms of one-hand usability, the A72 is great because of the narrow-screen and firm grip from the sides.

When it comes to the fingerprint sensor, it can be improved to be faster. And I did notice that there’s a very minor lag when the device is unlocked. It is also positioned pretty low, and I wished that maybe it could’ve been a little higher so my thumb doesn’t have to be stretched so low.

Apart from that, the Samsung Galaxy A72 is a great device to use as a daily driver. It’s simple, easy to use, and the features it have allows it to provide a seamless, pleasant experience. Not to mention, it is also IP67 rated for dust and water resistance. You can bring it with you underwater for up to 1m for 30 minutes.

In terms of performance, the Samsung Galaxy A72 runs on a Qualcomm Snapdragon 720G, paired with 8GB of RAM, and 256GB of storage. That’s more than capable to handle all your daily apps and games, as well as store all your precious photos and videos.

During my time with the phone, I’ve never experienced any stuttering while navigating or switching between apps on the phone. Apps launch fast, and games run just fine as long as their on mid settings. For game testing, I used Genshin Impact because it’s arguably the most graphics demanding game on Android right now. It runs fine on mid settings, but if you crank the settings anywhere higher than that, the device does get mildly heated and the FPS does take a hit. Other games like COD: Mobile and Arena of Valor perform just fine on high settings.

Here are the benchmarks we’ve ran for the Samsung Galaxy A72:

The Samsung Galaxy A72 has quad camera setup on the back, which is headlined by a 64MP wide-angle main sensor with OIS features. It also has a 8MP telephoto sensor that supports 3x optical zoom and 30x Space Zoom (digital) with Zoom Lock feature. There’s also the 12MP ultra-wide angle sensor, a 5MP macro sensor, and an LED flash module to complete the setup.

When it comes to photo quality, the A72 takes photos with great clarity. Images and videos captured are definitely social media worthy, but the responsiveness in the camera’s UI still has room for improvement. The shutter button has a bit of delay as it takes a bit of time to finish photo processing in the background. When switching modes, there’s also a short delay before switching. Auto-focus wise, it isn’t as fast as the S21 series, but it is indeed accurate.

Night shots are truly impressive, even in an almost dark room, the device can brighten up the environment with just a click of a button. OIS works well on the device to allow you to capture steady videos, as well as assisting in the Zoom Lock feature. On top of having the new Single Take 2.0 feature, there’s also the “Fun” mode where you can use different filters provided by Snapchat to take more interesting selfies right from the camera app itself, no Snapchat account required.

Here are some of the shots we’ve taken with the Samsung Galaxy A72:

The Samsung Galaxy A72 has a dual speaker setup, with one downward facing speaker on the bottom, and one front-facing speaker on the top, embedded within the earpiece. The volume can go loud with minimal distortion, and it has pretty good soundstage and sound isolation. Each frequency is well handled, and doesn’t crossover one another.

The highs are very bright, and it’s good that it doesn’t distort. Vocals are punchy in the mids, and the lows are fairly decent. Overall, the speakers perform as they should. But if you prefer having more bass for your parties, it’s better if you have a Bluetooth speaker with you.

The battery life on the Samsung Galaxy A72 is one of the major features of the device. The 5,000mAh battery could last me the entire day, and sometimes even two days straight. To be honest, I’m surprised with the battery life, but that’s probably thanks to the 90Hz AMOLED panel.

Charging the device from zero to full takes about an hour and 48 minutes with the provided 25W fast charging adapter in the box. While charging, there’s not much heat being dissipated too. And while I would’ve liked wireless charging on the A72, it might have been omitted to keep the device affordable.

The Samsung Galaxy A72 is a thin and light mid-range device that exudes flagship vibes. It’s taken several flagship cues and compacted it all into a sleek, minimalist smartphone. There’s the 90Hz AMOLED panel, 5,000mAh battery, IP67 rating, as well as the reliable Qualcomm Snapdragon 720G processor.

For RM1,899, it is slightly pricier than when the Galaxy A71 was launched. But, I think it’s justified with the entire package the Galaxy A72 has to offer. It’s been a delight to use the phone for the past two weeks, and it’s literally a no-frills device.