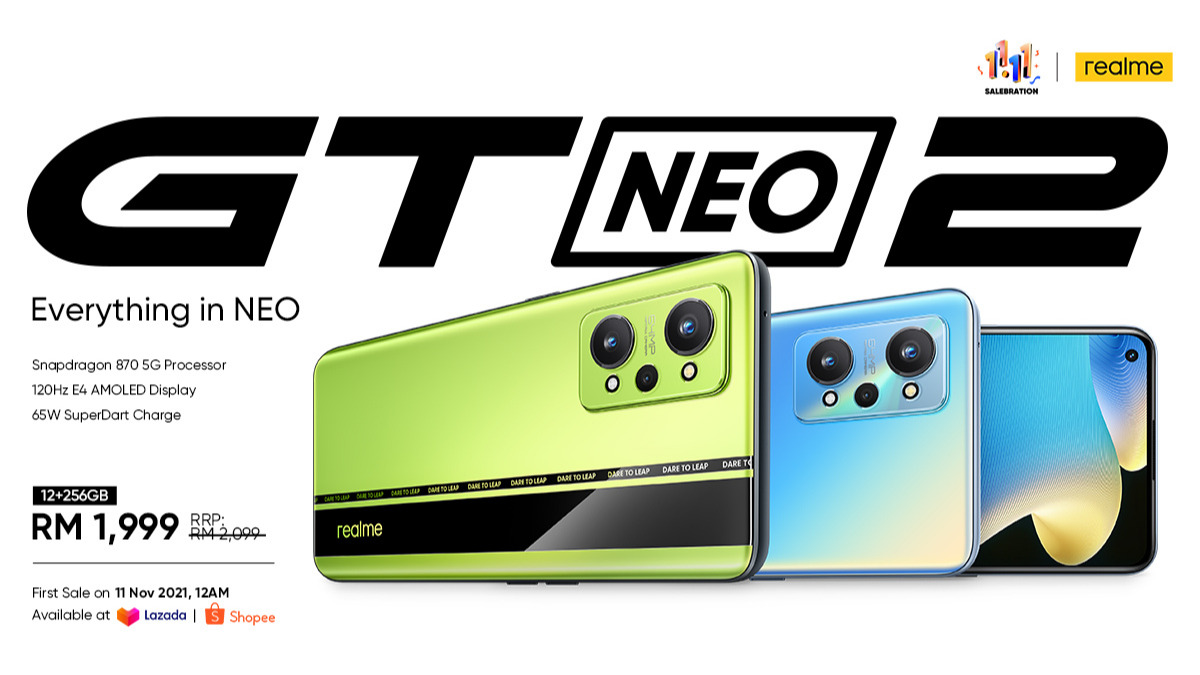 The realme GT Neo2 equipped with Qualcomm Snapdragon 870 5G Processor, Stainless Steel Vapor Cooling Plus and 120Hz E4 AMOLED Display will be available for purchase starting from 11th of November on realme Malaysia’s Official Store on Lazada and Shopee at a deal of only RM1,999.

“The realme GT Master Edition launched in Malaysia September was showered with attention and support from realme fans. Today, we introduce the realme GT Neo2 to thank our fans who have always supported us. This device will be sure to elevate our fans’ experience in gaming as well as other forms of entertainment. Malaysians can look forward to more advanced devices with flagship features like the GT Neo2 from realme,” Crystal Gong, Brand Director of realme Malaysia

realme GT Neo2 – Everything in NEO

The realme GT Neo2 comes in a bold choice of high-saturation neon colour with black and matt-finish contrast glossy.  The device is available in two young and bold colours,  NEO Green and NEO Blue. The design of the realme GT Neo2 also has an unique overlay of 7 nano-multilayers giving it a smoother surface, scratch resistant, environment-friendly and a comfortable feel holding as well as using it.

The device is equipped with a 6.62-inch 120Hz E4 AMOLED Display delivering a bright and vibrant viewing experience to users with high peak brightness of 1300nit, high contrast ratio of 5,000,000:1 while being 15% power-saving.

realme GT Neo2 consists of four different refresh modes from 30Hz for always-on-display up to 120Hz refresh rate for high performance experience. Users can adjust realme GT Neo2’s refresh rate according to their liking from 30Hz, 60Hz, 90Hz to 120Hz. In the new GT Mode 2.0, the touch sampling rate can be maximized until 600Hz per touch, and CPU performance optimized with just one touch.

realme GT Neo2 is the first device equipped with the Stainless Steel Vapor Cooling Plus which adopted the Diamond Thermal Gel as a layer for heat dissipation. It is a superb thermal conductive material compared to other thermal compounds with up to 50% more effective in heat transfer. realme has also increased the area of its stainless steel VC heatsink to 4129mm, and it covers 68% of the motherboard and 42% of battery area, to ensure a faster heat dissipation speed.

Apart from that, it also comes with 65W SuperDart Charge and 5000mAh Massive Battery which only takes 36 minutes to a full charge. As for its camera, the realme GT Neo2 comes with a 64MP Main camera alongside an 8MP ultra-wide snapper and a 2MP macro lens plus features a Street Photography mode.

Realme C25Y And Realme Narzo 50i

Realme Malaysia announced two new smartphones in the C series and narzo series, realme C25Y and realme narzo 50i. The realme C25Y is built with a powerful UNISOC T618 processor, 50MP AI Triple Camera and a 5000mAh mega battery making it an entry-level king in its price segment.

The realme narzo 50i is introduced to offer fans an affordable entertainment device with long-lasting battery life and 6.5” large display. Realme fans will be able to get their hands on these devices starting from 11 November at realme Global Store on Shopee.

The realme C25Y comes with a 5000mAh Mega Battery for an enjoyable non-stop usage. The battery life of the C25Y can last up to 48 days in standby mode. This phone also features a 18W Quick Charge with OTG Reverse Charging so users can charge other devices using the smartphone without worrying about not having a charging station nearby.

Besides that, the device packs a 50MP AI Triple Camera with a 2MP Macro Lens and a 2MP B&W Lens as well as a 8MP Selfie Camera. realme C25Y is also equipped with a 6.5 inch large display to give users a more immersive viewing experience. It uses realme’s classic mini-drop design full screen with a screen-to-body ratio as high as 88.7% for an immersive visual experience.

The realme narzo 50i is equipped with a 5000mAh Massive Battery, the Ultra Saving Mode can let the smartphone stay alive for 2 days on standby mode with just 5% battery left. It is also built with a 6.5” large display with an 88.7% screen-to-body ratio enabling better viewing experience for games and videos.

In terms of performance, it has a Powerful Octa-core Processor and is equipped with a 3-card slot for two SIM cards and one SD card and supports a maximum of 256GB memory expansion. realme narzo 50i comes with an 8.9mm super slim body with Diagonal Stripe Design that gives a simple yet aesthetic feel to the smartphone.

Realme fans can grab their realme C25Y (4+128GB) first at realme Malaysia’s Official Store on Lazada and Shopee for RM699 on the 6th of November. For fans who prefer a smaller variant, realme C25Y (4+64GB) will be available online starting from 11th of November on realme Global Store and Shopee for just RM499 (RRP: RM599). For realme narzo 50i, it will be priced at RM499, but you can get it with only RM399 exclusively on the first sale that falls on the 11th of November from realme Global Store on Shopee.

The realme Pad is the first tablet by realme in the realme ‘1+5+T’ ecosystem. Powered by Helio G80 gaming processor, WUXGA+ Display, Quad Speakers With Dolby Atmos & Hi-Res Certifications and Ultra-Slim Design, it will be available for purchase from 11th of November through realme Malaysia Official Store on Shopee.

The realme Pad comes in an Ultra-Slim design that is 6.9 millimeters thin and weighs at only 440g making it light and comfortable to hold. realme Pad also adopted an industry-leading aluminum alloy body design giving a premium quality and first-class hand-feel to it.

The realme Pad features a high quality 10.4-inch WUXGA+ Display with the resolution up to  2000×1200 pixels allowing users to enjoy an immersive viewing experience with sharper and vivid details. The device is also eye-friendly to users as it has several features like reading mode, dark mode, night mode and sunlight mode suitable for every situation while consuming contents through the realme Pad.

As for the sound quality to complement such an immersive display, the realme Pad is built with Quad Speakers With Dolby Atmos & Hi-Res Certifications offering you the best stereo surround sound through this slim device.

Take Gaming To The Next Level

The realme Pad runs on a octa-core Helio G80 Gaming Processor which is a great fit for users to use it for gaming, work and other entertainment purposes. The processor achieved clock speeds of up to 2.0GHz with its Mali G52 950MHz GPU outperforming its predecessor by 20%.

Apart from that, it comes with a 7100mAh Mega Battery enough to standby for 65 days straight and supports 18W Quick Charge as well as Reverse Charging. The realme Pad is also suitable for online classes and work from home individuals as the tablet is equipped with 8MP HD camera, capable of taking clear videos. It also features a 105° ultra wide-angle to capture more of your surroundings.