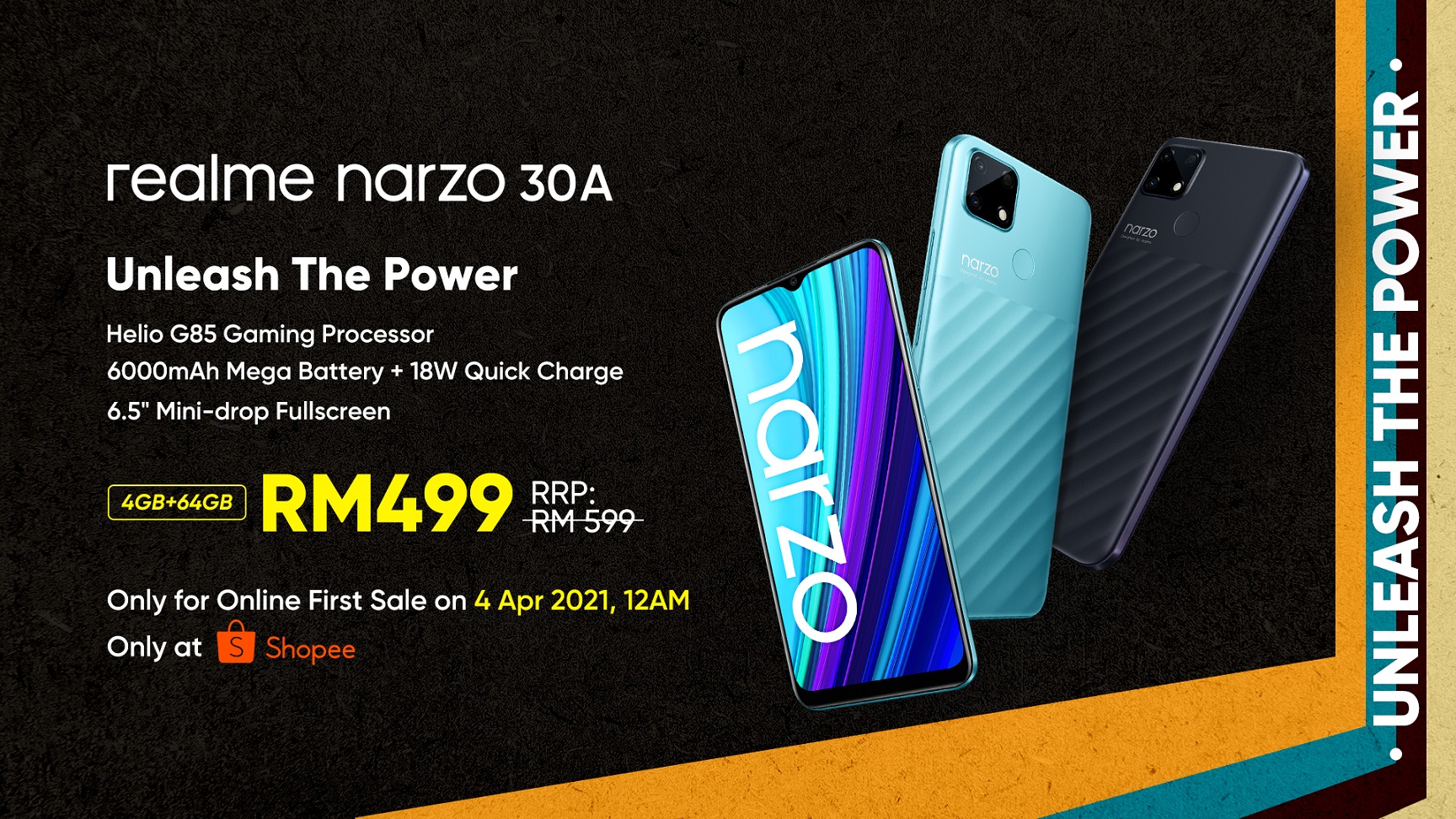 In the camera department, it features a dual camera setup on the rear. This includes a 13MP main sensor, and a 2MP monochrome sensor. With Super Nightscape Mode on, you can take clear, bright night shots without a tripod, along with the three night filters – Cyberpunk, Flamingo and Modern Gold. On the front, there’s the 8MP sensor for selfies and video calls.

In terms of battery, the realme narzo 30A features a mega 6000mAh battery and 18W Dart Charge that support flash charging via USB Type-C. According to realme lab tests, the battery is capable of lasting for 46 days in standby mode which is better than some flagship smartphones. It can survive 52 hours of phone calls, 114 hours of unlimited music on Spotify, 10 hours of gaming and 27 hours of video streaming on YouTube.

Connectivity wise, the realme narzo 30A has Wi-Fi 5, Bluetooth 5.0, and a 3.5mm audio jack for those who still prefer using wired earphones/headphones. The realme narzo 30A is available in two colours options which are Laser Black and Laser Blue.

The realme Mobile Game Finger Sleeves are made up of 30% Superconducting Electric Silver Fiber where its sensitivity is 6 times higher than ordinary carbon fiber materials. It uses the Spin Covering Yarn Technology with 18 needles densely woven.

The realme Cooling Back Clip helps smartphones to stay at a manageable temperature with its patented Dual Cooling technology. By turning on ‘1s Rapid Cooling’ function, the device begins to cool down rapidly with the power-driven semiconductor ice chip and a 7-blade fan that pushes cold air across the entire device. The realme Cooling Back Clip also operates silently as low as 27db, and it even has built-in RGB lighting.

As for the realme Mobile Game Controller, it uses the CapAir Mapping Technology to directly send electrical signals to the screen with an almost imperceptible delay and provides ultra-short key ranges. The Recordable Burst Mode enables players to realize the recordable one-touch burst, allowing you to easily attack regularly and defeat a horde of opponents quickly. It has a long 80-hour battery life, and it uses micro switch trigger for shorter keystrokes, and faster trigger response times.