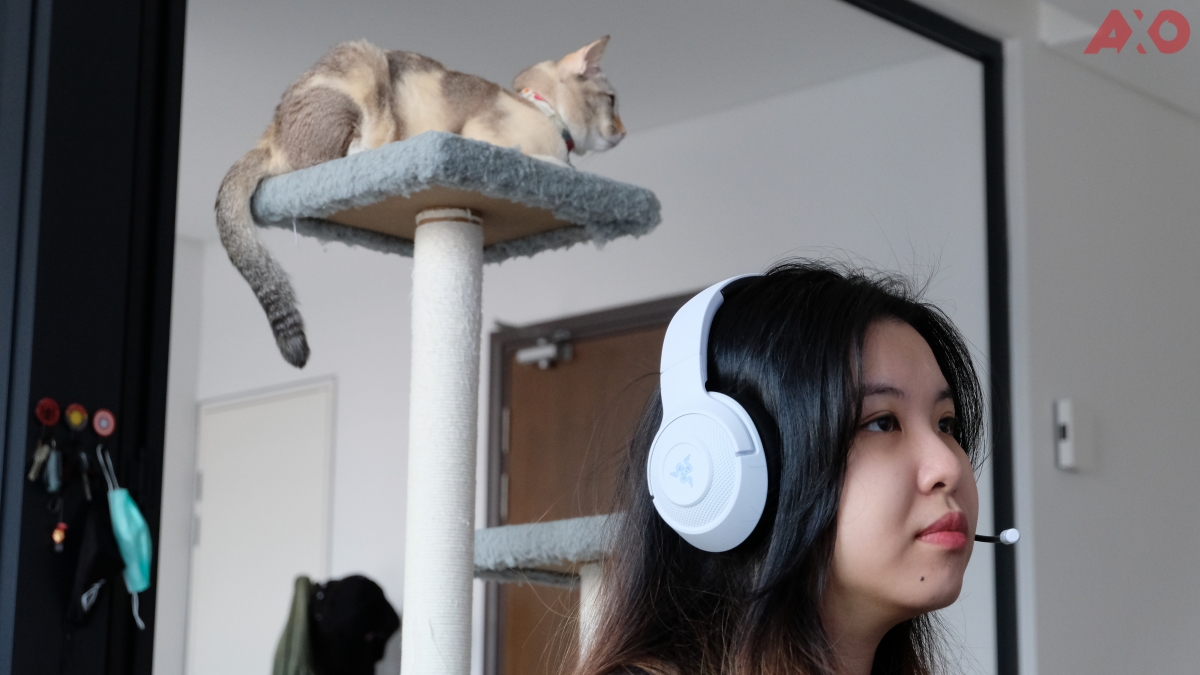 Into console gaming but need a good pair of headphones? Meet the Razer Kraken X for Console gaming headphone. It’s lightweight, it has crystal clear audio, apart from it not having wireless connectivity, it looks to be a pretty great package for a gaming headphone. Before we dive into the review, let’s check out some of its specs.

The Razer Kraken X for Console features a white and blue colour theme that strays away from the signature Razer Green, to better fit the Sony Playstation 5 that it’s meant to be used with. Of course, there’s also a black green variant that matches the Xbox console too. Not to mention that the RAZER branding is placed on top of the headband, which actually looks pretty classy. The inner lining on the earcup is also lined with blue fabric to match.

On the left earcup, you’ll find the dedicated mute button, and volume slider. These are all the controls you’re getting on the headphone. The mute button doesn’t have any light indicator, so you’ll need to distinguish the mute status based on the button’s height.

The headphone has a dedicated cardioid microphone that is not detachable, but can be bent/flexed to stay away from your face. The adjustability is pretty firm, and keeps in place once adjusted. This is a wired headphone, and unfortunately, the 3.5mm audio cable is not detachable as well. But, it does feature a thin, non-tangle design, and it’s easy to keep as the cable isn’t too long.

The headphones has a oval shaped ear cushion, instead of the circular rounded ones found on the standard Razer Krakens. This is much better as it provides better coverage around the ears, and the padded foam on the earcups and headband provides a soft, cushy feeling on your head, not at all restraining. The headband is adjustable, and the earcups do support a bit of swivel. Too bad, the earcups doesn’t rotate to lay flat to rest on your shoulders.

After long hours of gaming, the headphones provided an overall comfortable experience. I’ve not experienced any audio fatigue, but the headphones do have quite the grip on them. But after using it for a week, it did manage to loosen up a little, and it’s been all-day comfortable ever since. Despite the earcups being in leatherette, it didn’t accumulate too much heat, and any excess sweat can easily be wiped off and sanitized.

Having a Playstation 5 and with the Razer Kraken X for Console being in blue and white, that’s the first device we connect to. Connectivity options, there’s only the 3.5mm audio jack. That means it can work with any console or device that has the analog connector. That includes the PS5, PS4, Nintendo Switch, Xbox Series X, Xbox One, PC, and also your smartphones. In our case, we connected it to the controller.

The Razer Kraken X for Console delivers in terms of audio quality. Despite not having noise cancelling technology, the headphone outstanding coverage on the earcups somewhat makes up for that. Once worn, it cuts out half the surrounding noise, and when your game audio is on with the right volume level, you can rid yourself of the outside world. Goodbye world, hello Teyvat (that’s Genshin Impact, by the way).

Audio quality wise, the headphone provides punchy bass, along with great mids for amazing vocal performance. This is particularly great for in-game dialogues, as well as explosions, shots fired, and etc. However, the highs do sound a bit muffled, but it’s not a dealbreaker since this isn’t meant to be for music listening.

To sweeten the deal, Razer has also thrown in a code to enable 7.1 channel surround sound on the PC on a software level of course. It works really well, paired with its innate audio performance, it’s easier to distinguish where enemies are, especially in a game of The Last of Us 2. The sound profile leans towards clarity and precision, and this works great if you’re using it with a PC on Windows 10. Unfortunately, 7.1 channel surround sound isn’t available on other devices/consoles.

Now comes the performance and quality of the microphone. On PC, the microphone works great and my voice can clearly be heard in online meetings and Discord, etc. But when I’m connected to the PS5, the quality drops quite a fair bit and my friends have a hard time hearing what I’m saying. It might be due to the secondhand connectivity since it’s converted from wired to wireless, but if you don’t use comms on your console, then this shouldn’t be an issue to you.

I love how versatile the Razer Kraken X for Console is, being able to plug out and switch to virtually any gaming device I have. It looks amazing, when paired with my PS5, and I’m sure it would look good on all-white desktop setups as well. For the price, I’d say it’s affordable seeing how it’s an all-in-one audio solution. It has all the basic features you’d need in a headphone – great audio, essential buttons, built-in mic, and flexible connectivity options.

The Razer Kraken X for Console is a nice refresh of a pair of headphones for the Kraken series, and I’m excited to see an improved version of it. Maybe a wireless one or one with Razer RGB Chroma support next time, Razer?

Advertisement. Scroll to continue reading.
In this article:Gaming, headphone, Razer

Razer has announced a slew of latest product lineups at CES 2023. This is the first  opportunity for gamers and tech enthusiasts to get...