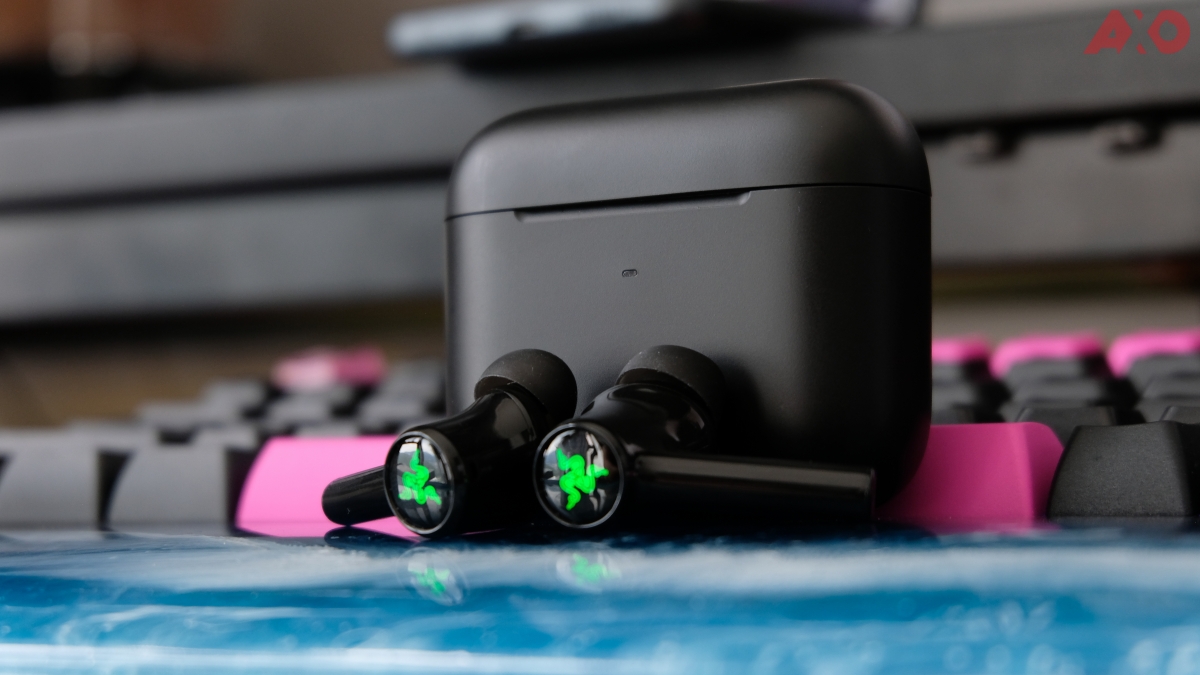 The Razer Hammerhead TWS 2nd Gen is exactly what its name suggest, a 2nd iteration of the original Hammerhead TWS. But this time, it’s been upgraded with some of the features from its older siblings in the same series. Mainly, it’s going to be the inclusion of active noise cancellation (ANC) and the full support for Razer Chroma RGB. Paying homage to the TWS X and TWS Pro, what other specs does it feature?

When it comes to the design, it’s sort a mix and match package. The Razer Hammerhead True Wireless 2nd gen has the exact same charging case design as the X and Pro. But for the earbuds itself, it features an in-ear design like the Pro, with a glossy, reflective finish like the X. Best of both worlds, right?

The Razer logo on the side are backlit, but now upgraded with the full Razer Chroma RGB support. This means you can customize it to be whatever colour you want, or just have it puke rainbow colours to bedazzle everyone who walks past you. As soon as you open up the charging case, the Chroma RGB lights up, indicating it’s paired and ready to go.

When it comes to comfort, it gives the same level of comfort as the Razer Hammerhead TWS Pro. The stem is roughly the same size, but it doesn’t stick to the side of your face to annoy you. After long hours of usage, I did start to feel a bit of audio fatigue from the two hour mark onwards. But after taking them out and resting for 10 minutes, they’re good to go again.

In our headbanging test, the Razer Hammerhead TWS 2nd gen managed to stay in place. But in harder levels of headbanging, it did feel like it came off loose for a bit, but still managed to grip on for its life.

There was a hiccup with previous Razer Hammerhead TWS earbuds, was that they weren’t connected consistently to the Razer Audio app. The 2nd gen however, did not have this issue, and I’m glad it wasn’t plagued by it. All operations were smooth, there were no disconnects, and the firmware update could be carried out nicely without any problems.

The touch navigation on the Razer Hammerhead TWS 2nd gen is responsive, and the sensors are not just fast to detect touch, but to carry out the task as well. Often times, the command is carried out as soon as I’ve completed the touch gesture, and that’s great. No wait time, am I right?

For me, I went into the app to set up everything, and I’ve since never needed to use the app again. The rest of the controls can be toggled using the touch controls directly.

Being a TWS earbuds that has RGB Chroma support, you’ll need to download the Razer Chroma RGB app separately. This allows you to tweak the lighting profiles for the RGB Chroma lights on the Razer Hammerhead TWS 2nd gen. You can set the colour profile as well as lighting behaviour you want, but I’ve always been a fan of rainbow lighting that cycles through all colours. It’s the default lighting profile, so I’ve kept it at that.

The Razer Hammerhead TWS 2nd gen has decent highs, but I feel like it could’ve boosted the treble a little more. Of course, you can do that yourself in the equalizer settings in the Razer Audio app. With a little tweaking, the sound can be made even better. When it comes to mids, voice and dialogue is clear, and the lows are really strong and comes through well with depth. It has one of the best audio enjoyment I’ve experienced from a pair of TWS earbuds in a while.

In terms of call quality, the Razer Hammerhead TWS 2nd gen’s microphone does pickup voice well, but it is described as “often times muffled”. But if I were to speak louder, then my voice could be heard better. So, it’s best to speak up when you’re using these earbuds, and not whisper. If you’re using them at home, it should be fine because you can be as loud as you want, but if you’re in public, you might end up looking like an obnoxious individual trying to tell your mom to not cook your dinner tonight.

When it comes to battery life, using the latest Bluetooth v5.2, the Razer Hammerhead TWS 2nd gen performs admirably as it could last up to about 6 hours on a single charge. Couple that with the charging case, it gave me about a total of 31 hours of use time, which is somewhat close to Razer’s claim of 32.5 hours of total usage. During my use, I kept volume levels at 40% as the earbuds can get really loud even at lower levels, and most of the time, ANC was on with the RGB Chroma turned off.

With the RGB Chroma on, it definitely takes a hit on battery life, as I was only able to get about 4 hours of use from the earbuds. Considering you get the light show to flex to those around you, sacrificing a little battery life shouldn’t be an issue to you. But if you want maximum endurance, it’s best to just turn them off (and only turn them on when you notice people looking?).

The Razer Hammerhead TWS 2nd gen has a beefier design with the charging case, and a much more solid build on the earbuds themselves. It’s nice and compact enough to fit into any bag, backpack, or even handbag, and will definitely be an eyecatcher when you’re in public places, or even public transportation. Just be sure to set the RGB speed to max so people actually know the colour is changing.

For the price of RM699, it offers ANC, long battery life, and great customizable sound. The Razer Audio app combined with the Razer Chroma RGB app makes the earbuds ever more customizable, whether it’s in terms of practicality or aesthetics. The only thing I would nitpick is that it doesn’t support wireless charging, but cable charging is faster anyways.