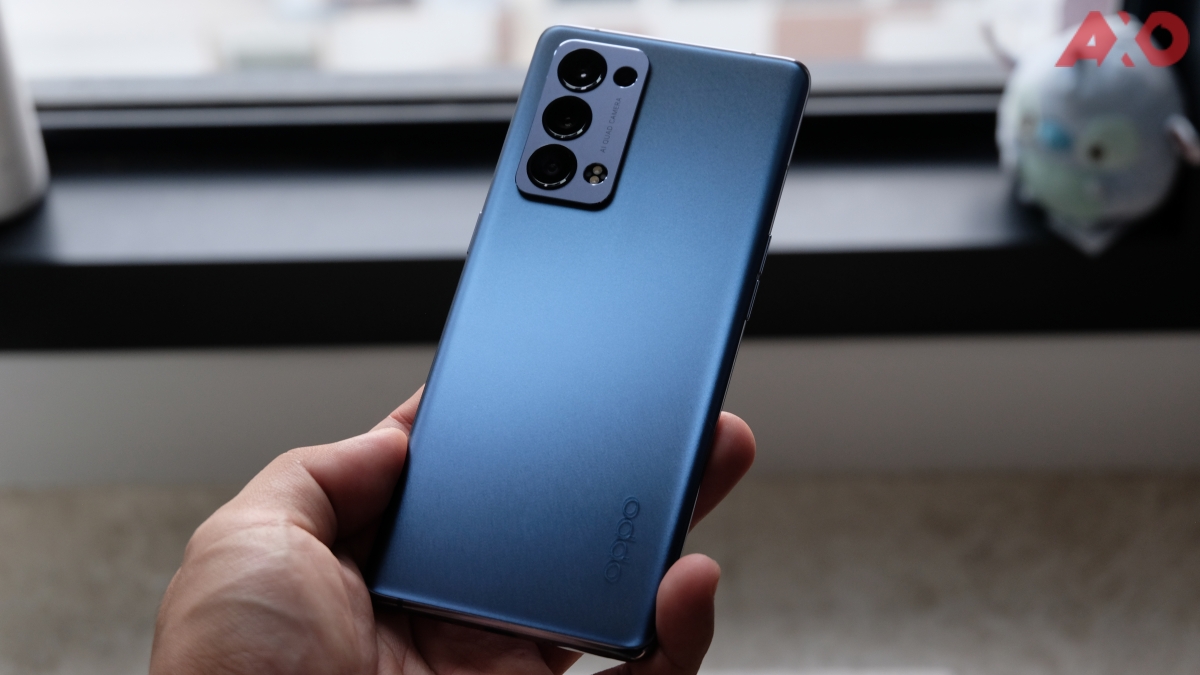 The OPPO Reno6 Pro 5G was unveiled back in August 2021, as part of the company’s latest Reno lineup. Packing in Qualcomm’s Snapdragon 870, just how well does it perform as a daily driver? We took the device out for a spin for a couple of weeks, and here’s our thoughts on it so far.

The OPPO Reno6 Pro 5G is a great looking device, and it feels great to hold in the hands. The edges have a nice curve to them, making them more comfortable to be held. The sides have a chromatic look to the them, which does give it some grip. On the back, there are the camera modules that are placed on the top right corner as well, with the rest of the back showcasing the Reno Glow.

On the left, there’s the power button, and on the right, you will find the volume buttons. Down at the bottom, there’s the SIM tray slot, the USB Type-C port, as well as the speaker grille. Looking at the top, there’s nothing much except for the small cutout for the microphone.

The screen is a large 6.5-inch display with a 92.1% screen-to-body ratio, and the selfie sensor has been placed in the top right corner under a keyhole notch. It’s a beautiful AMOLED 3D curved panel, that also has a faster 90Hz refresh rate as opposed to the standard 60Hz, which makes the phone feel that much snappier.

Display quality wise, it’s decently bright and is still visible under harsh direct sunlight. When watching videos or playing games on it, colours shown are vibrant, and has great contrast thanks to the AMOLED panel and HDR10+ certification.

Due to its aspect ratio, it makes it great for media consumption, as well as social media scrolling as well. Because it’s more narrow and taller, less scrolling is required and you get to see more on the screen at once.

Using the OPPO Reno6 Pro 5G for a couple of weeks, the device is definitely a more premium midrange smartphone. It certainly has the finesse and performance of a flagship smartphone, but a price tag of a higher-end midrange device. The phone feels solidly built and as mentioned before, it feels really comfortable to hold in the hands. The back has a nice smooth, matte texture to it, while the sides give it that much needed grip.

I personally didn’t like that the volume buttons were moved to the left side of the device, and I think they could’ve been left on the right side instead. However, because of this placement, taking screenshots are a lot easier, but a bit awkward when you’re trying to control volume, especially if you’re a right hander.

Several gripes I have with the phone being at this price point (RM2,999), is that it doesn’t have wireless charging and proper Ingress dust and water resistance rating. It would have been nice if it had some form of protection against splashes/water spills, and wireless charging would be convenient to have too (more on this later).

Running on Qualcomm’s Snapdragon 870 5G chip, the OPPO Reno6 Pro 5G certainly does pack a few very capable punches. Coupled with the 90Hz refresh rate, navigation on the smartphone feels smooth and snappy, and multitasking between apps feels like a breeze too.

I’ve faced no lag or screen hangs, and even during longer hours of gaming, the phone does warm up a little, but not to the point of scalding and you’d need to put the phone down. If need be, OPPO has also included a feature where you can convert your storage into additional virtual memory for more power.

In the OPPO Reno6 Pro’s camera department, the 50MP quad camera system certainly is sufficient for daily usage. The camera UI is straightforward and easy to use, and there are no shutter delays when taking a shot. Except for when it comes to night shots, where it does take a while for the sensor to gather as much light as it can to give you a brighter shot.

In well lit environments, the Reno6 Pro 5G does a great job at shedding enough light onto the shot, and preserving details. The phone does zoom up to 20x digitally, and it has the Bokeh Flare Portrait feature too. It does make for a nice photo under enough sunlight, but other times, it just appears the algorithm can’t quite catch where to apply the post processing to.

Here are the sample photos taken with the OPPO Reno6 Pro:

The OPPO Reno6 Pro 5G does come with a dual stereo speaker system, but it lacks a 3.5mm audio jack. So for those who prefer wired headphones, you’ll need to find a USB-C audio dongle, or just go wireless with a pair of TWS earbuds.

Speaker quality wise, they do get very loud without any audible distortion. The highs and mids are surprisingly clear, but lacks bass when you need that thump listening to certain music genres.

When it comes to battery life, the OPPO Reno6 Pro 5G could last me for an entire day with about 30% of battery left. That’s starting from 9am to about 10pm, with casual usage on work, instant messaging, and social media browsing.

As mentioned earlier, the OPPO Reno6 Pro 5G doesn’t have wireless charging, but it does have 65W SuperVOOC 2.0 charging, and that’s already good enough for everyday charging. Wireless charging is definitely slower anyways, and wired charging is going to replenish your battery juices faster too.

The OPPO Reno6 Pro 5G is a splendid device that ticks off a lot of the boxes that make a great premium midrange smartphone. It doesn’t have the best of the best features and hardware, but it makes full efficient use of what it has to provide the best it can offer, and that is what makes it a great smartphone.

In this article:Oppo, Review, smartphone