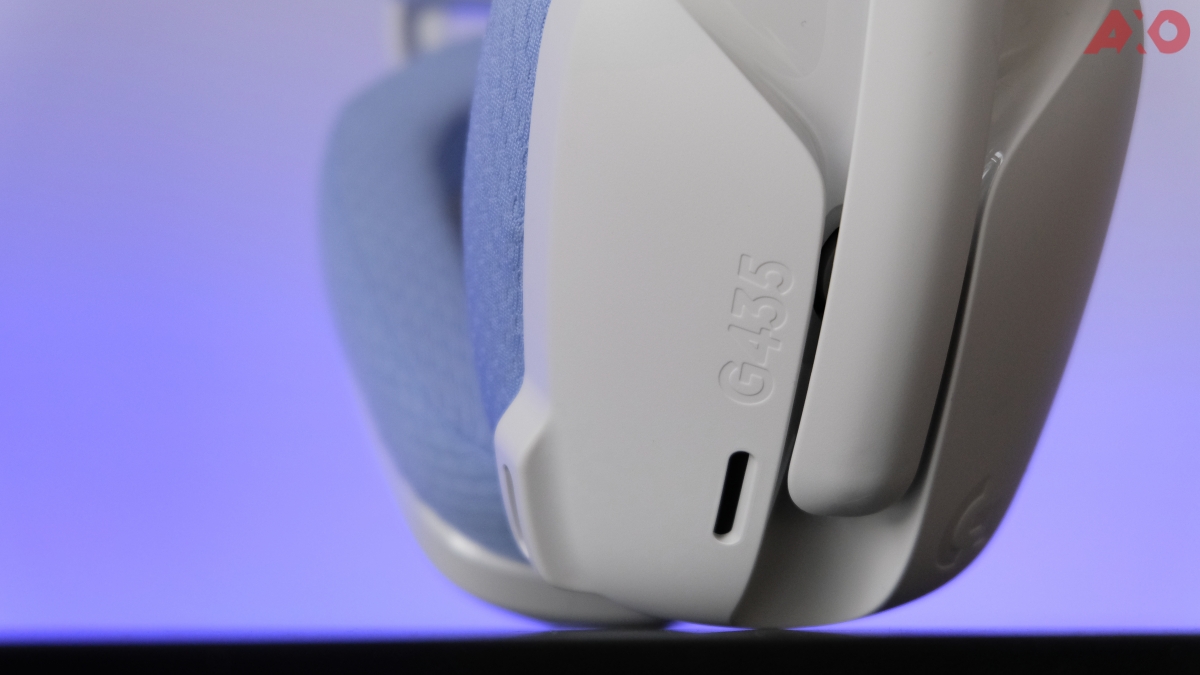 The Logitech G435 is the company’s latest offering in terms of wireless headphones. At first glance, the Logitech G435 seems too good to be true. It has dual connectivity modes, extremely lightweight, has a sturdy build, and is priced at only RM299. Before we put the headphones through its paces, let’s go through the specs first, shall we?

The Logitech G435 we got is the Lilac variant, and it’s a breath of fresh air from the usual black you get from gaming headphones in the market. The pop if Lilac only appears on the earcups, headband and the coiled cable that connects both L and R sides of the headphones. We appreciate the pop of colour, and we’re liking the direction Logitech is going with their G series peripherals.

On the left earcup, you’ll find the power button accompanied with an LED status light. There’s also the volume buttons, as well as the microphone mute button, and the USB-C port for charging. The dual beamforming microphones can also be found on the left earcup, while the right earcup doesn’t host any buttons at all, leaving it clean. The earcups also has these Lilac-coloured coiled cable connecting both sides together, giving it a rather unique look which we love.

The headphones feature a mesh fabric earcup, and a thin layer of mesh fabric on the headband. There isn’t any additional cushion padding, but it’s still very comfortable to use as you don’t really feel it there. The earcups don’t swivel, but they’re small enough to not rub against your chin when you place them on your neck.

Speaking of small, initially I thought the Logitech G435 would be too small for my head. But to my surprise, the adjustment range on the earcups was fairly long, and the flexibility on the headband was generous, allowing it to fit my head perfectly.

Holding it in my hands for the first time, I could immediately feel how lightweight it was. Putting it on, I was truly amazed at how light it felt on my head. The adjustment was great, the earcups had just the right size to cover my entire ears just fine. And even after long hours of usage, it stays comfortable, and didn’t accumulate much sweat too. The combination of light and comfortable makes it a great choice for those who game for hours on end.

As for the connectivity range, both on Bluetooth and 2.4GHz LIGHTSPEED wireless, I could walk away from the connected device up to 10m with no issues. From my workstation, I could walk all the way to my laundry area without any disconnects or stuttering. As opposed to the Logitech G733, it would start stuttering at the kitchen area, which is before the laundry area.

Unfortunately, the Logitech G435 doesn’t sync up to the Logitech G Hub software, so there are no further customization to be made. However, the headphones are straightforward, just plug the Logitech Lightspeed USB receiver in, and it works right out of the box. The same goes with Bluetooth connectivity, just pair it with your device and you’re good to go.

For the buttons, they’re all placed on the left earcup and they’ve been very easy to pickup and familiarize with the positioning. Each button has a very distinctive feedback to assure you you’ve pressed on them, though each press is audible right beside your ears. They’re easily distinguishable, and Logitech even added small braille notes on each side of the earcups to indicate the left and right sides. Very nice touch, Logitech.

For a wireless headphone that’s priced at RM299, how good would it sound? Very good, I would say. The 40mm drivers on the Logitech G435 packs great volume, even at 30%, I was already satisfied and felt that it was loud enough for my use. Even if I wanted to blast some EDM tracks, the loudest I could tolerate was 60%, that’s how loud it can get. The highs are fairly bright, the mids provide great vocal performance and soundstage, while the lows gives really great bass performance, even from such a small pair of headphones. Tiny but mighty, definitely.

Even if there’s no customization to be made to the sound, it already sounds great as is. I had an enjoyable time watching movies, listening to music, and also playing my games. I’ve experienced no lag or audio delay too, which is great.

As for call quality, my voice is very much audible (volume wise) on all conference calling tools I use on a daily basis – Zoom, Google Meet, Discord. My voice is loud and clear, with a bit of low to give it more depth.

I was skeptical with the dual beamforming microphones at first, but it proved to perform better than expected. On top of not having that dedicated microphone stick blocking your face/mouth, the mics offer great recording quality.

When it comes to battery life, seeing as there’s no RGB lighting system on it, the Logitech G435 definitely outlasts the Logitech G733 in this department. Having the volume on 30%, the headphones lasted for a total of 16 hours and 25 minutes over the span of 4 days in our test. That is actually pretty amazing, considering you don’t need to recharge the headphones on a daily basis. The headphones were used for online voice/video calls, gaming, video watching, and also music listening.

As for battery level notification, the Logitech G733 has built-in voice prompts when pressing the power button once. For the Logitech G435, pressing the power button would show the battery level through the LED status light, but the problem with that is you have to take off the headphone to see it. Still, a small matter compared to everything else the headphone has to offer.

In conclusion, we can’t really deny just how good the Logitech G435 is. We love how lightweight it is, how it connects via LIGHTSPEED wireless and Bluetooth, and lastly, its price. These three key points are what makes it a great contender in the wireless gaming headphone segment. It offers great audio with great design that would go well with most gaming setups you could have.

In this article:Gaming, headphone, Logitech, Wireless

Logitech has unveiled that Logitech Combo Touch, Slim Folio and Rugged Folio as well as the new Logitech Crayon, are all available for new...