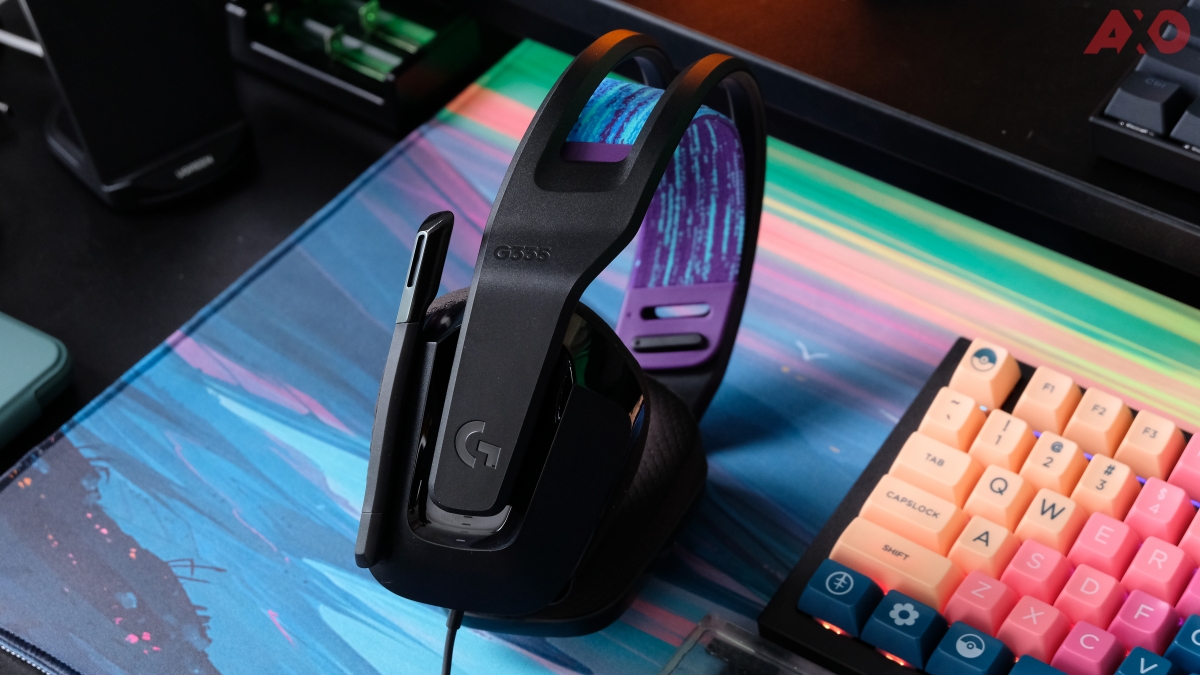 The Logitech G335 is essentially a wired, tone down version of the Logitech G733 wireless headphones. It is a pair of wired headphones using a 3.5mm audio jack, has the same design cue from the G733, albeit a smaller body. There are no RGB strips on the front, but the elastic fabric strip on the top does get a splash of colour. Priced at only RM269, how does it perform? First, let’s check out some specs.

The Logitech G335 has a simple box design, and minimal accessories within the box. The unit we received was in black, with a purple “glitch” design on the top elastic strap. The elastic strap has two levels of adjustments, requiring you to take it out and move it up/down a notch. The headphones are made of plastic, but they do feel sturdy. It has a good amount of flex, the earcups do not swivel, but they are indeed adjustable in length.

The earcups use memory foam lined with sports mesh fabric for maximum breathability, and it really does reduce the amount of sweat collected on the ear area. The microphone is not detachable, but it is retractable by pushing it upwards. On the left earcup, there is a volume wheel and that’s pretty much all the controls you’ll be getting on the headphone. There is no physical mute button, but the microphone does get muted when you slide it into the upward position.

In terms of comfort, the Logitech G335 does feel a little small for my head, even with the earcups adjusted to maximum length. Or maybe it’s just a problem my thick uncut hair due to the lockdown we’re in. The elastic strap is comfortable, though we wished there was more cushioning on the top, maybe a thin cushioned elastic strap?

The earcups fit just fine, and they have ample amount of coverage space for my ears. It has a tight grip on my head, and doesn’t feel loose at all. After wearing it for a couple of hours, I only feel a slight discomfort on the top of my head, whereas the ear area feels fine with minimal sweating.

The headphones weigh only 240g, and that’s pretty lightweight. After wearing it for a while, you do feel like the headphone just disappears into the background. But when you need to leave your workspace, just remember you need to take them off as they are wired.

The wires aren’t exactly my thing, as I would opt for wireless headphones. But, they don’t bother me as much, as long as I have them routed neatly on my desktop. It has a good length to reach my desktop that’s placed under the desk.

The microphone has good placement, and being able to tuck it away like that makes it great for when you need to get a drink, or just stop talking for a while. Once it’s slid up, it also doesn’t get in the way of your vision, and that is great.

Unfortunately, the audio cable is permanently attached onto the Logitech G335, so you have no choice but to wind the cable up with the headphones for easier storage. It would’ve been better if the audio cable could be separated.

The Logitech G335 is a very straightforward pair of headphones, and I love how minimalist it is. There’s no fuss, just plug and play, and you’re ready to start watching, gaming, and etc. My only gripe with it is that it’s a bit too small for my head, but it might be just the right size for you.

In the audio department, I’ve always been a fan of Logitech’s sound profile, and the same gets translated in the Logitech G335. It has great soundstage, where different frequencies are well isolated. The volume can get really loud, but you might not want to go full volume because the audio does get a bit distorted when you do.

The Logitech G335 does have clear highs, and decent mids when it comes to vocal performance in music and games. It has just the right amount of treble, but it’s the bass that really gets me. It has a nice clean thump when listening to bassy songs, the lows are sufficient enough to feel the impact of the media you’re listening to.

Unfortunately, this is a wired headphone, so it isn’t compatible with the Logitech G Hub software. That also means there is no additional customization when it comes to sound or EQ profiles. Even so, the default audio quality is already good enough for your everyday media consumption.

Being a Discord certified headphone, the Logitech G335 works great on all online conferencing platforms I use on the daily – Discord (obviously), Zoom, as well as Google Meet. I have faced no issues whatsoever, and the microphone picks up my voice clearly. It has adequate volume with great clarity, and focus on low frequency sounds.

The Logitech G335 is a lightweight pair of headphones that doesn’t just look good, but sounds great as well. It’s essentially a smaller, wired version of the Logitech G733 Lightspeed wireless headphones, minus the RGB lighting and wireless capability. Priced at RM269, it offers quite the value with Logitech’s known rapport of durability. There are several areas Logitech could improve with the G335, like increasing the size a little, or making the microphone and cable detachable, maybe in a v2 or G336? Whichever naming scheme they decide to go with.

In this article:headphone, Logitech, Review

The LUMOS ATOM is the latest portable projector in Lumos’ series of home cinema projectors, following the LUMOS NANO that we have tested and...