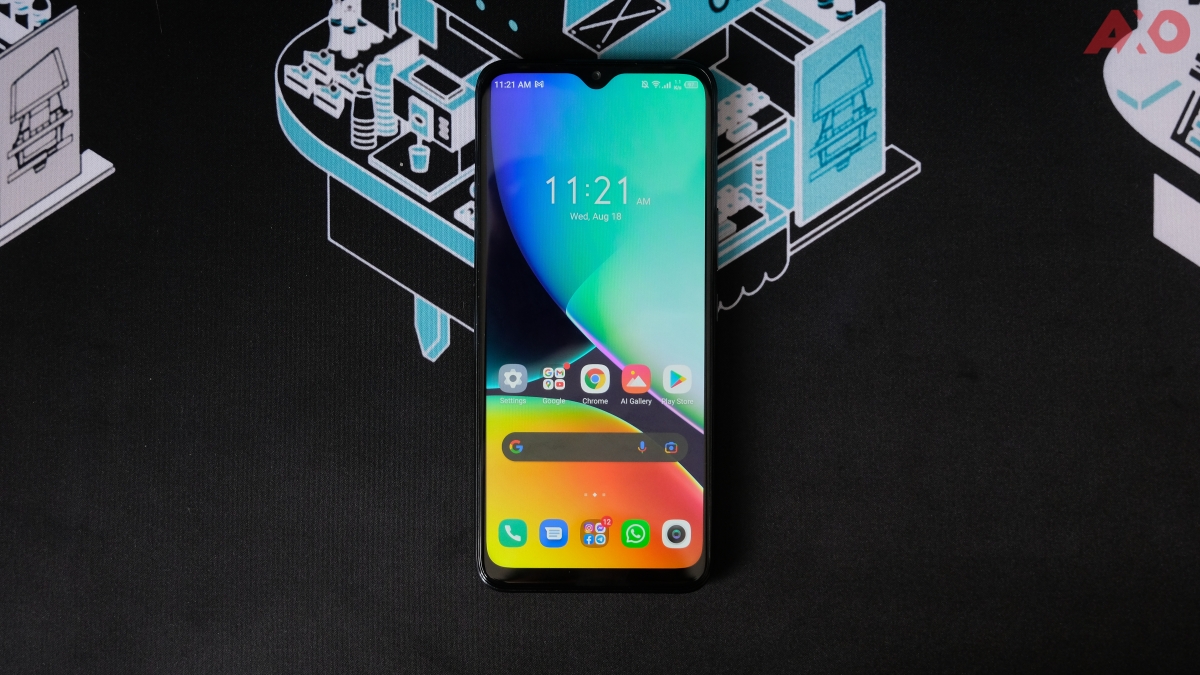 The Infinix Hot 10s just landed in Malaysia, and we’ve been given the opportunity to have a go at it for review. Packing a MediaTek processor with a display and battery, just how will perform in its price segment? Let’s find out, but before that, specifications.

The Infinix Hot 10s features a slim and thin design that doesn’t feel too heavy in the hands, despite it weighing 210g. Its body is made of plastic with a reflective, glossy finish. Unfortunately, that also means it’s prone to fingerprint smudges that are pretty obvious at certain angles.

On the left, there’s the SIM tray slot, while the right has the volume rocker and the power button. Moving round the back, you’ll find the triple camera system with the flash module, along with the fingerprint sensor in the center of the device. The speaker grille, 3.5mm audio jack, and microUSB port can be found on the bottom of the device. And yes, probably to make the device more affordable, they had to resort to using microUSB (more on this later).

The Infinix Hot 10s has a 6.82-inch IPS LCD panel with a 720p resolution. The good thing is, it’s using an IPS panel which is great for wide angle viewing, and the 720p resolution is bright and clear enough for daily usage. To top it all off, navigation is also made to seem smoother, thanks to the 90Hz refresh rate, instead of the standard 60Hz found on most phones these days.

As for the LCD panel, I thought it would cause battery life issues, but to my surprise, battery life on this phone is amazing (more on this later).

Using the Infinix Hot 10s for a good 2 weeks+, I’m actually pretty impressed with what the device has to offer. I’m particularly fond of the battery life it offers, and how good the screen is. The fingerprint sensor does feel a bit dated as most brands have opted to embed them under the display or into the power button. This isn’t a dealbreaker at all, and the sensor works just fine with fast response times.

The phone feels light in the hands, with a nice grip even without the casing. The camera bump is also rather thin, so there’s no major wobble when using the device on a flat surface. The display is further enhanced with a boost of 90Hz refresh rate, which makes for a smoother navigation experience on the phone.

What I didn’t like about the phone was not the UI, but the ads. Yes, despite how different the UI is compared to stock Android’s UI, it’s actually fine. It was the ads and bloatware that are embedded throughout the phone that got me. After a while, they kind of disappeared from my sight, (you can’t remove most of them), and I just got used to it. The ads appear in your notification centre, in the app drawer, and also in the form of apps.

When it comes to performance, the MediaTek Helio G85 does a great job of handling all the apps I used on a daily basis. There are some hiccups once in a while, but for the most part, it’s been pretty snappy at multitasking. The 4GB + 64GB combination also makes for a sufficient memory duo to keep the device performing optimally, and have ample space for all your data.

The phone has been a pleasure to use, and even when it comes to gaming, I just needed to tweak the settings down a little, and I could still get smooth gameplay out of it.

Here are the benchmarks we ran on the Infinix Hot 10s with 3DMark and GeekBench 5:

In the camera department, the Infinix Hot 10s has a triple camera system on the rear which consists of a 48MP main sensor, a 2MP depth sensor, and a 2MP monochrome sensor. For the front, there’s an 8MP sensor in charge of selfies and video calls. The camera app is snappy and responsive, each shutter press is fast to capture image as well.

Do take note that 48MP shots are only available on the 4:3 aspect ratio, whereas the 1:1 and 20.5:9 aspect ratios are in 35MP and 27MP respectively. And unfortunately, there is no optical zoom, so you can only use the digital zoom up to 10x.

Image quality wise, surprisingly the phone manages to reduce background noise while retaining clarity. With the right amount of lighting, photos can look incredible with the 48MP sensor. But, if it gets a little too bright, the phone struggles with white balance, and some shots can tend to look a little overexposed. Colours aren’t oversaturated, though, but they do lean towards a slight warmer tone. As for night shots, they look mediocre, but when taken with the Night Mode, photos do look better overall.

Here are some of the sample shots we took with the Infinix Hot 10s:

The speaker on the Infinix Hot 10s is made of a single speaker at the bottom of the phone. It’s loud, and does have some distortion at loud volumes, but it gets the job done. It has a very bright highs, with decent mids, and a lack of lows (no bass). But like we mentioned, it’s still sufficient for media consumption like TikToks, YouTube videos, and games.

For those who prefer wired connections, there’s still the 3.5mm audio jack!

Battery life is definitely one of the best features of this phone for me, but it also feels like only half the victory. While the phone can last me up to 3 days without recharging, when it comes time to recharge, it takes near to 3 hours to fully charge the device from 2% to full. The microUSB port doesn’t help with that, and I wish Infinix went with USB Type-C connection instead.

The Infinix Hot 10s offers amazing set of features for its entry-level price. For RM549, it has a smooth large screen with a battery that lasts for days. After using flagships for a while, I find it quite refreshing to dial it down a notch and find that entry level devices could still offer great performance for the value. To learn more about the Infinix Hot 10s, you can check it out here.