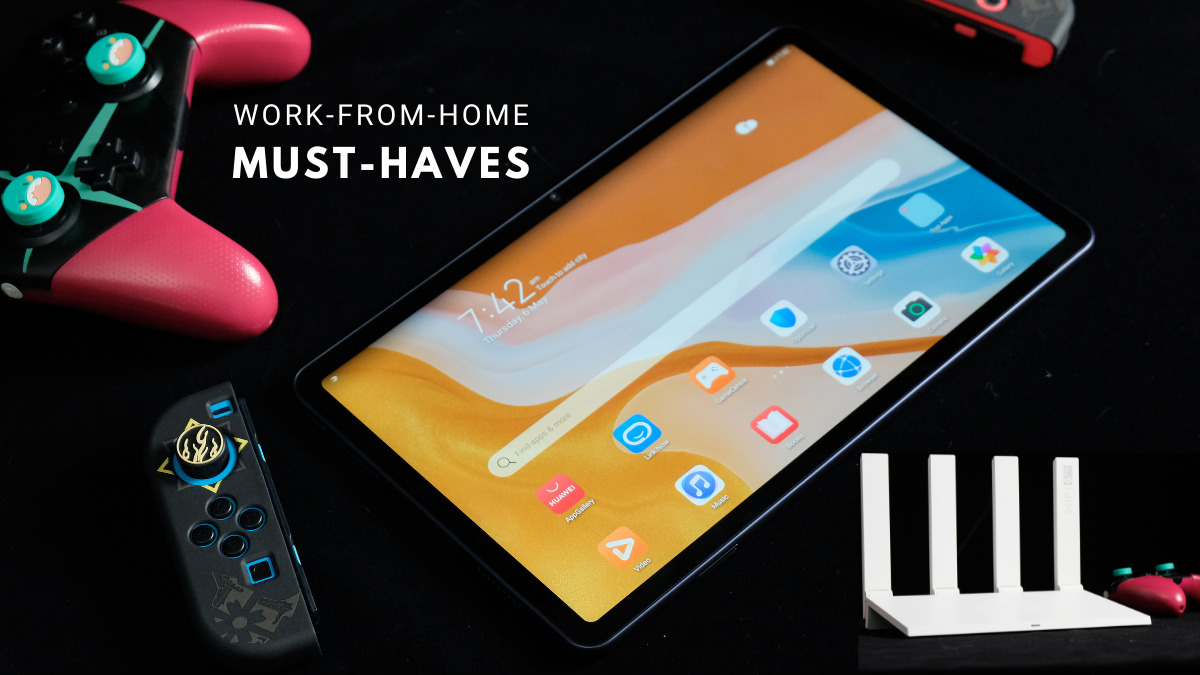 We’ve been testing the Huawei MatePad 10.4 and the Huawei WiFi AX3 Router for a couple of weeks now, and we must say, they are a perfect match together. Here are three reasons why we think they’re a match made in heaven, and should definitely be on the list of things to get for WFH.

Laptops are the most common devices to use when working from home, but most of the time they’re chunky, heavy, and down right annoying to use. So, why not slim that profile down to the 10.4-inch screen on the Huawei MatePad 10.4? Not only are you getting a large screen, it also features a 2K resolution that gives you even more clarity for when you’re processing those documents, or reviewing those images done by the designer.

Best of all, the large and clear screen is fully portable, and you can bring it with you virtually anywhere. With the front camera sensor, take video calls wherever you are. Catch up with friends and family with the new MeeTime feature that can do 1080p video calls, tackle a business meeting while having a secret snack on the side.

With the 7,250mAh battery, the MatePad 10.4 can last for days, at the least, two days. I’ve tried doing my work entirely on the tablet alone, and after going through a whole day’s worth of work with me, it still had 47% battery left. Of course, this was strictly work alone, and no entertainment consumed on the side. But still, that’s pretty impressive considering the screen was turned on almost the entire time.

When the battery’s low, leave it to charge overnight, and the next morning, it’ll be ready to tackle a few more work days with you. When the weekend comes, it’ll be a great movie companion for you to catch up on series and dramas you missed out during the week.

Performance You Can Count On

Equipped with the Kirin 820 processor, the Huawei MatePad 10.4 is paired with 4GB of RAM and 128GB of storage. 4GB is more than enough to handle your everyday Internet browsing and app management. Navigation has been smooth for me, and I’ve never experienced any hiccups too.

If 128GB storage still isn’t enough for you, you’ll be happy to know that there is a microSD card slot available, allowing you to expand the memory further up to 512GB. But, trust me. 128GB is already overkill, unless you’re using the tablet as a streaming device.

What’s the point of having a big screen if you can only look at one app at a time? That’s where the new Huawei multi-tasking feature comes to play. One, you can view up to two apps at the same time, side by side. You can even drag and drop content to share between the apps. For example, dragging a portion of text to copy from an email, then dragging and dropping it into the Notes app.

Apart from that, you can also pair up your Huawei smartphone with the Huawei MatePad 10.4-inch tablet, and take advantage of the Multi-screen collab feature. This feature allows you to use your smartphone directly from the tablet’s screen itself. You have full control over your device, including media too as audio will be played directly from your tablet.

Wi-Fi 6 is one the biggest reasons why it is a must to have during WFH situations. Most homes aren’t optimized for network coverage, and that’s where Wi-Fi 6 fixes things. It uses the latest technology to deliver faster speeds, wider and more stable network coverage.

When comparing it to my previous stock router, the Huawei WiFi AX3 Router equipped with Wi-Fi 6 is the clear winner. Because the MatePad 10.4 is also packed with Wi-Fi 6, the first thing I noticed was the stronger signal bar, and the next was how much faster things loaded on the browser app. Even when I’m in the laundry area, where there’s a bunch of walls in between me and the router, I could still get a good connection where previously the old router would just make the connection disappear.

Overall, if you’re going to be working from home, trust me, you don’t want to be sitting in one spot for the entire day. Move around, bring your tablet with you, grab a cup of coffee/tea too, and be sure to relax while you work. The Huawei MatePad 10.4 is a great tablet to both work and play with, and the Huawei WiFi AX3 Router (Dual-Core) is a great Wi-Fi 6 router upgrade for any home.

In this article:huawei, Router, Tablet