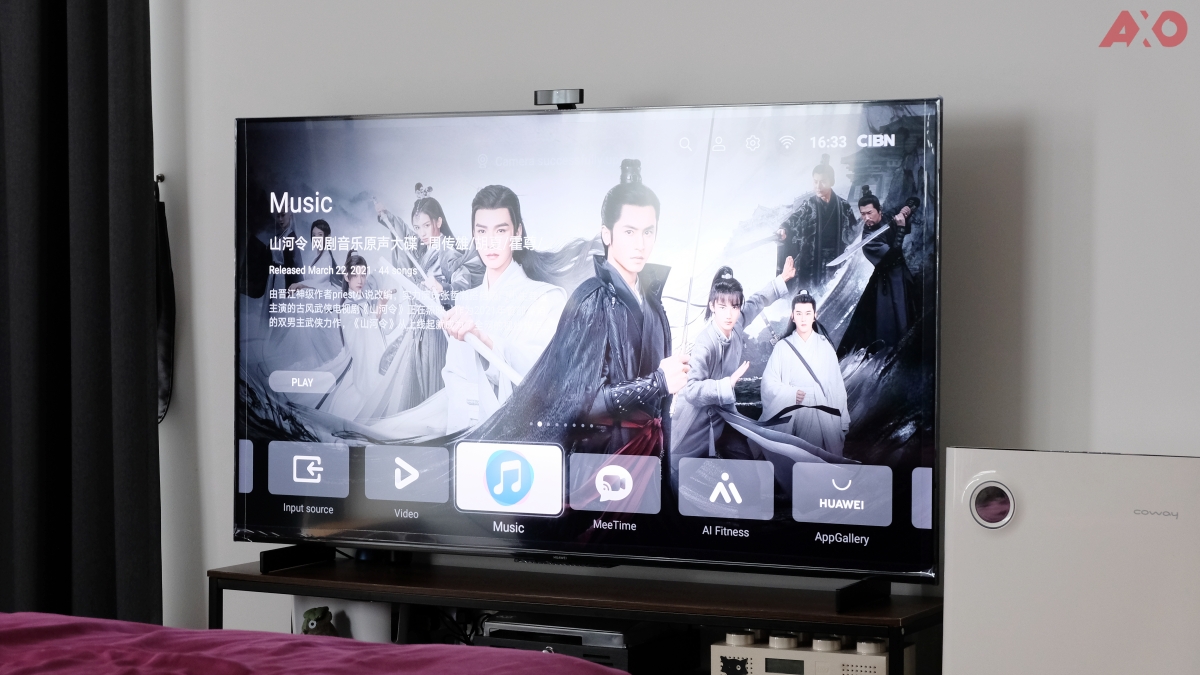 The Huawei Vision S is the company’s latest foray into the smart TV category. Being the successor of the Huawei Vision series of smart TVs, the Huawei Vision S packs a bunch of new features that make it worthy of any living space. Going beyond what is expected of a TV, we decided to take on a review unit to see if it’s any special.

The Huawei Vision S features a slim, minimalist design that still allows for thin bezels. As a result, the screen has a much higher 94% screen-to-body ratio. This means less black frames on the edge, more real estate for you to view your content on.

When it comes to connectivity ports, on the rear left, you have the power port. Meanwhile, on the rear right side of the TV there are:

The TV’s frame is made of glossy plastic, so it does have a bit of shine when there’s a strong light source coming in from windows. But, what I like about it is that the frame doesn’t bulge from the display itself. There’s a very slight elevation between the display and the frame, but it’s a mere 0.2mm, which makes it appear thinner and more seamless.

The Huawei Vision S does also have two stands on the bottom, which are thin and straight. At first, I thought they wouldn’t be stable, but the TV stood firm and had little no wobble at all. In terms of mounting options, unfortunately the Huawei Vision S doesn’t have any mounting holes on the back. So, the TV will have to be planted on a console cabinet entirely.

On the top, there is also a magnetic connector outlet that lets you attach a webcam to make MeeTime video calls, or to take photos with the TV.

Unfortunately, the Huawei Vision S doesn’t support always-on display, which is a feature I would’ve liked to see. So instead of having a black screen in the middle of your living room when your TV is not in use, it would be better if the TV could display some sort of information like the time, date, notifications, or even a wallpaper to decorate the space the TV is in.

The best feature I love about the Huawei Vision S is the fact that it has a 120Hz refresh rate display. This not only reduces screen tearing and smoother on-screen animations, but it also allows for connected devices like a laptop, or gaming console to output at a higher refresh rate too. I’ve tried the Huawei Vision S with a desktop, laptop, and PS5, and they all work as intended when it comes to the refresh rate with no issues.

Seeing how the cinema standard is using 24fps and 30fps, 120Hz might seem like an overkill. But, that’s where the MEMC (Motion Estimation and Motion Compensation) feature comes in. As 120Hz is a multiple of both 30fps and 24fps, three or four frames can be added between the originally adjacent frames to facilitate smoother images on a 120Hz screen.

The Huawei Vision S also covers 92% of the DCI-P3 wide colour space, giving you brighter, and more vivid colours. The colours really pop off the screen, and the blacks are quite black with minimal light bleeding. In terms of brightness, the smart TV does have decent amount of brightness, and it does a great job of battling direct sunlight.

To protect the user’s eyes, the smart TV also comes with flicker-free technology and low blue-light screen. This means that the display’s brightness is more consistent, and it works to reduce blue light from harming the user’s eyes. However, blue light mode is not turned on by default. This needs to be enabled in settings, and when it is on, the screen does take on a mild yellowish tint as per blue light mode/eye care modes found on smartphones.

Sitting on the top of the Huawei Vision S is the 13MP magnetic webcam, which is detachable when it’s not in use, or for privacy concerns. The camera itself can be tilted up and down, easily removed, and supports Huawei’s proprietary MeeTime video call feature. The video call feature on the TV supports up to FHD resolution, and it also allows you to turn off the video for voice-only calls.

In order for MeeTime to work, the Huawei Vision S can contact another Vision S smart TV, or any Huawei smartphone/tablet that supports the MeeTime feature. I’ve tried calling the Vision S at home while I was out at work, and the call went smoothly with no hiccups as the TV can identify real-time network conditions and adjust the MeeTime video resolution accordingly (1080p, 720p, 480p).

On top of that, voice and video calls on your Huawei device can instantly be transferred to the Huawei Vision S to use the TV’s webcam, microphone, display so you can put your phone away.

Pro tip, the webcam can also be used to take group photos/videos when you have family and friends over for a gathering. No more finding a tripod to set up your smartphone for group photos anymore! It’s no Leica lens, but it takes decent images and videos under well lit environments.

Most TVs offer great picture quality, but lacks in sound quality. This results in users getting an external speaker system for better audio. However, this isn’t the case with the Huawei Vision S. Equipped with the 10W quad speaker system, I’ve found that the built-in speaker system sounds louder, and clearer than my dedicated soundbar speakers.

Within the TV itself, there are four 10W speakers – 2 full frequency speakers and 2 high frequency speaker units. These speakers are also accompanied by a large 1L sound cavity for a richer sound projection. The tweeters offer bright and clear highs, with great mids for vocals and dialogues. What surprised me was that the TV could also provide a decent amount of bass.

The Huawei Vision S’ remote control also features a minimalist design, as most smart TV remote controls do these days. Buttons are simplified and reduced to the necessary. You have the usual power on/off button, source, arrow wheel, OK button, back, microphone, menu, as well as volume up/down.

It’s powered by two AAA batteries, and it even has an NFC tag built-in for OneHop projection and smart control with your smartphone.

On top of just being a TV and showing you visuals, the Huawei Vision S is capable of much more. Staying true to Huawei’s DNA, the TV also incorporates some of Huawei’s signature features like OneHop projection, magnetic camera, MeeTime video call, and more.

OneHop projection can be found within the TV’s remote control, hidden under the Huawei Share icon. Just tap the back of your Huawei smartphone onto the icon, and you’ll be prompted with instructions to start sharing your smartphone’s screen onto the TV. The connection is easy to setup, because both phones do not need to be connected to the same WiFi network. Do note that only Huawei smartphones or tablets running on EMUI 9.1 or later, and has an NFC chip built-in supports this feature.

In terms of stability, the connection is smooth once a connection has been established. Casting is allowed for up to 1080p 60fps, so even games appear smooth on the TV with minimal noticeable delays.

On top of that, the Huawei Vision S also has the Huawei AppGallery built right in. This allows you to install certain apps (although not many as of this review) on the TV itself so you can have access to even more content, and some games.

The Huawei Vision S also supports Smart Control, where the entire navigation of the TV is transferred directly to your smartphone. The TV’s screen will be mirrored to your phone’s screen and you can simply touch tap on there to control the TV, including text input. However, this feature is only available on Huawei phones that run on EMUI 10.1 and above, and both the phone and TV needs to be connected to the same Huawei ID login and the same WiFi network.

Last but not least, the Huawei Vision S can also be controlled via voice when the screen is off. For example, when the TV is playing your favourite music playlist, you can simply turn off the display and leave the music playing in the background. While the screen is off, you can also activate it by saying “Hey Celia”, and asking it to play a TV show or movie. Subsequently, you’ll be redirected to the movie page when the display comes back on.

The Huawei Vision S is a great smart TV for existing Huawei users who are already within the Huawei ecosystem. The features are tailor-made for the company’s own devices, and would work well in harmony with them. If you’re using any other phone, the Vision S would just be like any other TV.

The pricing hasn’t been unveiled yet, but Huawei Malaysia has announced that they will be disclosing more information on the Huawei Vision S’ arrival in Malaysia on the 20th of April 2021. If they price it right, the Vision S could be a strong contender in the TV market, considering the features they bring to the (console) table – 120Hz refresh rate, powerful built-in sound system, detachable magnetic camera, smart control and projection.

If you’d like to, you can experience the Huawei Vision S for yourself now at select Huawei Experience Stores. You can also redeem a free gift when you do. Details can be found here.

In this article:samsung, Smart TV

Samsung has announced the arrival of Galaxy A04s, a smartphone from Samsung’s entry-level range. The Galaxy A Series is designed to give customers the...

It has been almost 3 years since Samsung made a splash with their foldable phones, and now the latest Samsung Galaxy Z Flip4 are...

The Samsung Galaxy Z Flip4 is now on store shelves and to say people are hyped is an understatement. Ever since Samsung brought back...