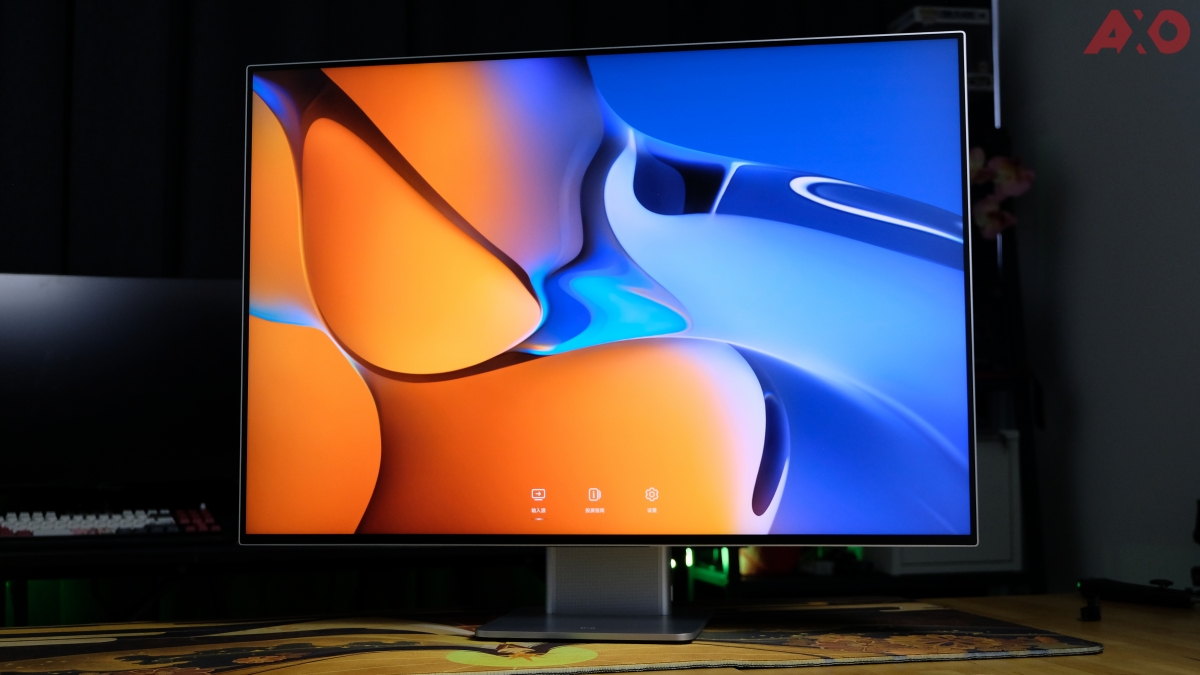 The Huawei MateView monitor is not just a monitor, but a smart monitor made for those who are mobile connected first. Harboring on a minimalist design approach, it features a full aluminium body, with a smooth finish all around. The front of the monitor has a clean look, not a single logo or button to be found. A type of design that would make the monitor fit into any WFH or office setup.

Another thing you’ll notice is the 3:2 aspect ratio, and the stand that has a lot of perforated holes. That’s actually where the dual 5W built-in speakers are, and right below on the base is where the NFC reader is. This reader interacts with the display’s Wireless Projection/Desktop Mode, accessible via a Huawei smartphone/tablet.

If you look underneath the bottom bezel of the monitor, you’ll see a small black bar. That’s actually the Huawei Smart Bar, which are the navigation controls to control the monitor. Just swipe your fingers left and right to move, and tap to select. Pretty easy to use, actually.

In terms of build quality, the Huawei MateView monitor is as elegant as it looks, and as sturdy as it can be. Not only does the monitor look good, it has a real reassuring heft to it, and you can immediately tell the monitor is made of high quality materials. The back of the display also has a brushed metal finish with the Huawei logo emblazoned on it.

As mentioned before, the Huawei MateView has a 3:2 aspect ratio instead of the standard 16:9 aspect ratio found on other mainstream monitors. Since this is a monitor geared for productivity, having a 3:2 aspect ratio would mean a taller display, allowing more content to be viewed, and also less scrolling required. It also features a 4K+ resolution on a 28.2-inch panel, with wireless display functionality. It supports both DCI-P3 colour space, along with a VESA DisplayHDR 400 certification too.

You will notice that there is no FreeSync, refresh rate is but the standard 60Hz, and the response time has nothing to brag about. That’s because those features are all reserved for the gaming model – Huawei MateView GT.

Picture quality wise, the display exhibits really vivid colours and fairly deep blacks. The LCD backlight is pretty uniform, with a small bit of dimming in the corners. It’s great there is no discoloration or tinting on the screen, offering spectacular colours regardless of the content you’re viewing. The monitor does have a glossy finish on the front, which makes it prone to reflections, even when the brightness is set to the max. It defaults to 190 nits, but can highs of 500 nits. Another way to remedy this is to prevent external light from coming onto the display.

While the monitor does look great for daily work tasks and media consumption, the display does seem to be on the warm side. Creative professionals might need to recalibrate the displays themselves for good measure.

The monitor already comes properly installed, so there’s no need for additional installation on your part. The box is also well packaged, just retrieve it out of the box, and you’re good to go. There is only one power cable needed to be plugged in, followed by the cable of your choice (DP, HDMI, USB Type-C, or wireless). Of course, if you’re connecting wirelessly via your smartphone/tablet, you’d need to make sure your Internet connection can keep up to ensure a smooth experience.

The monitor itself is already thin, carried by a thin stand as well. It allows for height adjustment from just 7cm off the desk up to a maximum of 18cm, along with tilt adjustment from -5 to 18 degrees. There are no rotation adjustment,

The connectivity ports are well placed into the stand, along with the speakers and the microphones. The base embeds the NFC reader to enable wireless projection, and these are just really friendly features to have. However, I would’ve liked for the NFC area to be a wireless charging area for your smartphones too. That would’ve made the entire experience much better, making the monitor more of an all-in-one monitor.

PCs can connect via HDMI, USB-C, and DisplayPort, but only USB-C and MiniDP will have full 60Hz refresh rate. Using the HDMI 2.0 port, 4K resolution is limited to just 50Hz instead. But let’s talk about that wireless projection NFC, as that’s what makes the Huawei MateView a smarter monitor than the rest. Wireless projection is supported via desktops, laptops, and a selection of newer Huawei smartphones or tablets.

When connected Windows devices, it will only show what’s on your screen. But when used with a Huawei device, it gives you the option to use Huawei’s EMUI Desktop Mode. Connection is smooth when connected to a Huawei device, but when we’re talking about Windows, there’s a certain lag to it, which we’ll recommend to just use a cable if you’re connecting to a Windows device.

The USB Type-A and Type-C ports are passed through to the connected PC, so you can transfer data between devices. The USB-C also provides up to 65W fast charging, so while the stand’s base doesn’t offer a wireless charging space, you can always connect a cable to your phone to charge it.

As for the Huawei Smart Bar, it’s a great new way to control your monitor’s settings instead of repeatedly pressing buttons below or behind the monitor. It works well and is responsive, but it does get quite warm when you’re connecting to a device wirelessly.

Here’s the list of gestures the Smart Bar can do:

Because of the Huawei MateView’s thin profile, the speakers don’t have much space. So while the highs are okay, and the mids are great, the audio system do lack a bit of bass for that thump. However, the audio quality is loud and good enough for daily casual usage and music listening. If you’re looking for a minimalist setup and not want anything else taking up space on your desk, the MateView’s speakers get the job done.

The monitor also has dual microphones built right in, to further facilitate video conference calls for WFH. We’ve tried using Discord and Google Meet calls with the built-in speakers and there are no echoes. My voice can clearly be heard by the caller, but there does seem to be a bit of wind noise that gets past the sensors.

Overall, I think the Huawei MateView monitor is a well-designed product in terms of both aesthetics and functionality. It’d just make more sense for those who are already within the Huawei ecosystem to purchase it. This makes sense because the user benefits more from the monitor by being connected to Huawei devices, and you’d already be familiar with the system and its mechanics.

That said, as a normal consumer monitor, the price tag of RM2,988 may be a bit steep for some, but it’s one of the monitors in the market that has a 4K resolution with a work-focused 3:2 aspect ratio. The ease of connectivity (wired and wireless) is just too good, and the colour-calibrated display could also potentially woo over the creative professionals. But, gamers might want to turn their eyes to the MateView GT instead.

In this article:huawei, Monitor, Review