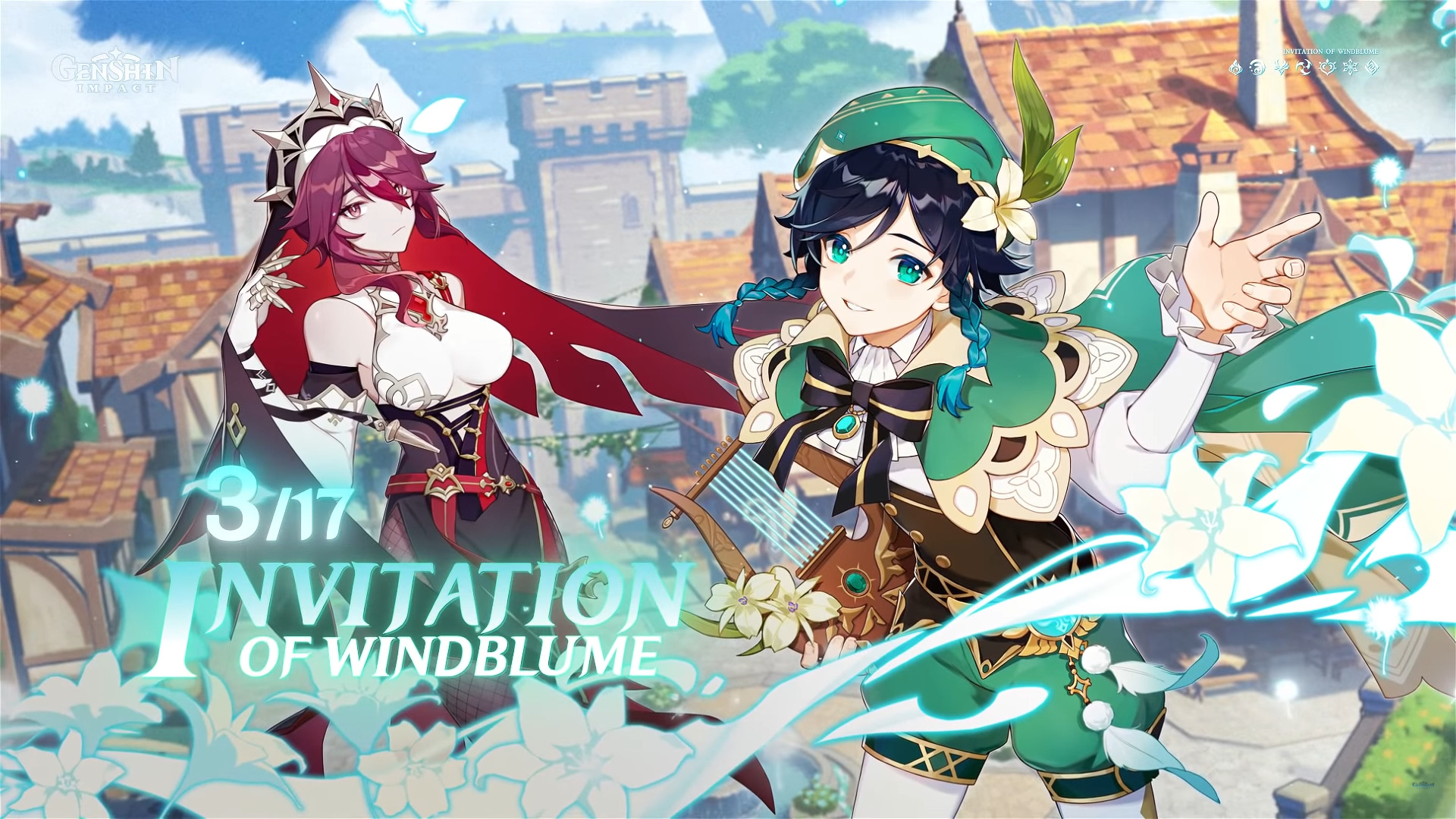 The Genshin Impact 1.4 update has officially been announced by Mihoyo, and it will arrive as soon as 17th of March, just a day after Hu Tao’s banner ends. Without further ado, we present to you, everything that’s added or changed in the upcoming update! From new characters, to new banners, events, and more.

We’ve seen her before, it’s none other than Rosaria. She is a four-star polearm user, who uses the Cryo Vision element. She can be either a DPS or support, depending on how you build her. Her specialty also includes increased movement speed to all party members from 6PM to 6AM.

In version 1.4, we’re introduced to the “Mondstadt Windblume Festival”, a festival of flowers, and romance. Apart from having the entire town of Mondstadt decorated, there will also be three mini-game events to go along with the “Invitation of Windblume” festivities.

First up, there’s the “Peculiar Wonderland”, where players can take on three different random stages of fun and games to earn buffs, before facing off against a big boss. Next up, there’s the “Festive Challenges”, where players put their shooting skills to the test to win prizes too. Remember, you have to shoot the right kind of balloon to win! In Floral Freefall, players will need to fly through the air and collect flower balls to earn points.

Last but not least, a very new concept to be added to the game – Rhythm game! In “Festive Anecdotes”, players must press the corresponding keys and play along to the tune, keeping every key and beat on point. There are three difficulty levels to choose from to earn higher points.

Do note that co-op is only available on “Peculiar Wonderland” and “Festive Challenges”. Complete all the events in “Invitation Of Windblume”, and exchange for multiple prizes, including the Windblume Ode bow up to refinement rank 5.

On top of that, with the given Event Harp, players will be able to compose their very own songs right from the game itself!

You might have seen this before, and it involves the Oceanid! In “Wishful Drops”, players will have to take on the already-difficult Oceanid in a special challenge. Oceanid will be able to attack you directly, while still summoning her own monsters to battle. Defeat these challenges to get more chances to challenge Oceanid again, and you could win:

A mini Oceanid will be accompanying you in these investigations as well! You will help the mini Oceanid absord different water creatures from multiple areas to earn “Heart of the Springs”. To fight against Oceanid, original resin is required, but having the Heart of the Springs, you can use that to claim your rewards for free, up to five times.

Hangout Events is the first of its kind in the game, where the traveler will get a chance to get up close and personal with four of the characters in the first series of this event. These four characters include Barbara, Noelle, Chongyun, and Bennett! You will get to converse with these characters, and have an option of the things you could say to improve your relationship with them. The more you explore, the closer you get, and the more prizes you could win.

Not only that, once you’ve completed a Hangout Event with the character, you could also obtain special “Memory Photo Cards” to commemorate the time you spent with them. Take note that the Hangout Events are permanent, and will stay in the game regardless of future game updates.

Originally a KFC campaign with Genshin Impact in China, Diluc and Noelle take on “part-time” jobs at KFC, and players will be able to receive food items like KFC friend chicken, KFC burger, as well as KFC mashed potatoes. In China, the campaign offers the limited edition KFC gliding wings. However, Mihoyo has confirmed that they are looking into the matter and will announce an update for these gliding wings for players in other servers by July 2021.

Also, we’ll learn more about Dainsleif, and what he has discovered about the Abyss Order. Judging from the trailer, we’ll find a Statue of the Seven that’s hung upside down, and we’ll be facing the new Abyss Herald: Wicked Torrents – a hydro Fatui member. Currently, this is a one-time boss, but it seems Mihoyo has plans to make him a weekly boss in the future.

It seems everyone’s favourite crowd control king, Venti, will be making a grand return in the Genshin Impact version 1.4 update. It isn’t clear who are the 4-star characters who will be accompanying him in the banner, but he will debut on v1.4’s launch day itself.

The next character to arrive in v1.4 after Venti is quite the surprise – Tartaglia Childe. Most people were expecting Jean, Mona, or even Albedo, from the rumors, so it’s a bit of a shock to see Childe returning so soon. Nonetheless, his banner will be accompanied by Rosaria as one of the 4-star characters.

There are a total of five new weapons released in the Genshin Impact 1.4 update alone. There are three bows in total, a sword, and a catalyst as well. One of the bow is a 5-star bow, which is apparently Venti’s signature weapon. The other bow can be obtained for free by completing challenges in the “Invitation of Windblume” event, while the final bow should be acquired from Wishing, along with the new 4-star sword, and catalyst.