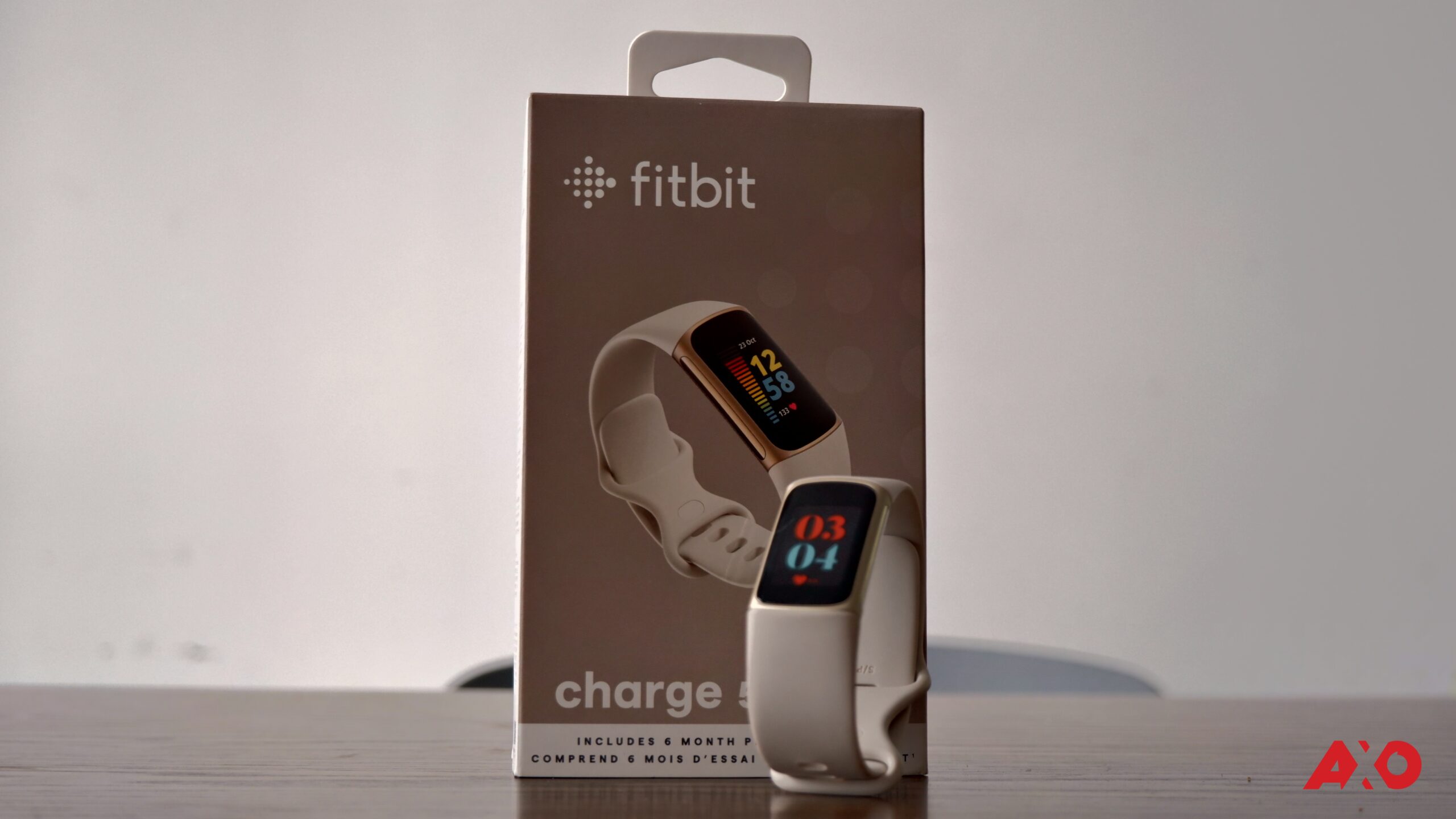 FitBit Charge 5 was launched earlier last month. FitBit has always been known as one of the top brands for activity tracker among the fitness community. The Charge 5 is updated with new features such as EDA and Daily Readiness Score. We gave it a try and here’s what we think about it.

Like most fitness tracker, the Charge 5 is designed to be lightweight and slim on the wrist. The Charge 5 looks more sleek like the FitBit Luxe in comparison to FitBit’s previous fitness tracker that is harder to match formal wear due to it’s sportiness design.

The colorway we got to try comes in a Lunar White strap with Soft Gold Stainless Steel watch frame. Picking up the Charge 5, you would notice that the fitness tracker does not have any buttons on it at all.

The straps are made of silicone material just like any other fitness trackers. It has a button and tuck in strap to avoid the end of the strap to be flinging around during your fitness or daily activities. It comes with straps of two lengths which are easily interchangeable by clicking the latch on the joining end of the strap and the watch body and pulling it out.

Laying on the back of the watch face would be the health monitoring sensors and the magnetic connectors to charge the tracker itself.

Like most of the smartwatches do, the FitBit Charge 5 has a all-day heart rate monitor. It does comes with a sleep, SP02 and skin temperature features which only tracks when you are working out or sleeping. Unlike other fitness tracker, you are able to able to check your SP02 or skin temperature even you are not working out.

The FitBit Charge 5, has a EDA Scan app which uses the thin strip of the metal frame of the sides to detect your skin’s sweat level and check your body’s response to stress. However, it feel a little bit awkward to use it as when you use it, you will have to hold the side between two fingers for 3 minutes. It is kind of uncomfortable, especially for those whom has bigger palms.

The fitness tracker only comes with 20 exercise modes which is pretty little compared to other fitness trackers out there. The Charge 5 do come with built-in GPS so that you do not have to bring your phone around during your outdoor run. You will be able to see your real-time pace and distance and the map via the app when you sync it with your phone later. During your run, the Charge 5 would also track your breathing rate and heart rate.

The Charge 5 has a relatively long battery life for a fitness tracker. I went on 5 days without putting it to charge. That might be due to the fact that I turned off notifications on the Charge 5 as I find it annoying that I can see messages but not respond to it. However, the call notification does come in handy especially if I do not have my phone around me while walking around the house. I would be able to check if its an important call that I would need to attend to via the notification.

If you are considering to get the charge 5, do note that it is more suitable for those whom are looking solely for a fitness tracker not a smartwatch. As a fitness tracker, it has all you need especially for those whom like to workout or go for outdoor runs. Not only because the size is small and lightweight, the data recorded for fitness sessions are sufficient to compare your fitness growth over time.

However, if you want a fitness tracker that also acts like a smart watch. I feel like there are not enough features available, especially for a wearable at this price point. Another thing that I wasn’t particularly fond of was the subscription to the premium app to unlock more data and features. For me to pay for a wearable at this price, I would like the full features to be already available to use.

Last but not least, the absence of a button made it hard to navigate around. If you didn’t notice that the battery is running it out, you may be trying your best to tap or swipe on the screen without knowing if you actually did click it or is the screen responding to your touch. The UI on the Charge 5 itself is quite tiring as you scroll data through taps. Once you tapped too fast, you might miss what your are looking for then you will have to go through the menu again just to reach where you want to be. Most of the time, I rely on the app to read data for my own convenience.

Another thing to note about this is that, if there are anything that goes wrong with the Charge 5, the only way to reset or turn on the tracker is to pop it on the magnetic charger. To reset, the charger has a button on its USB head where you can press to prompt resets. I rather have the button on the tracker itself. Imagine travelling for a few days and not bringing the charger along due to confidence in the battery life and not having the charger to reset if anything happens.

Well, that’s just a piece of my mind on the touch screen limitations. Apart from that, the FitBit Charge 5 is definitely a well designed fitness buddy for those whom like simplicity. With it more elegantly designed compared to other fitness tracker, you are able to match it no matter with casual or formal wear.

The FitBit Charge 5 is now available to purchase at partnering stores and online stores such as Shopee and Lazada for a price of RM 878. You can also get to know more about the FitBit Charge 5 at it’s official website here.

Advertisement. Scroll to continue reading.
In this article:fitbit