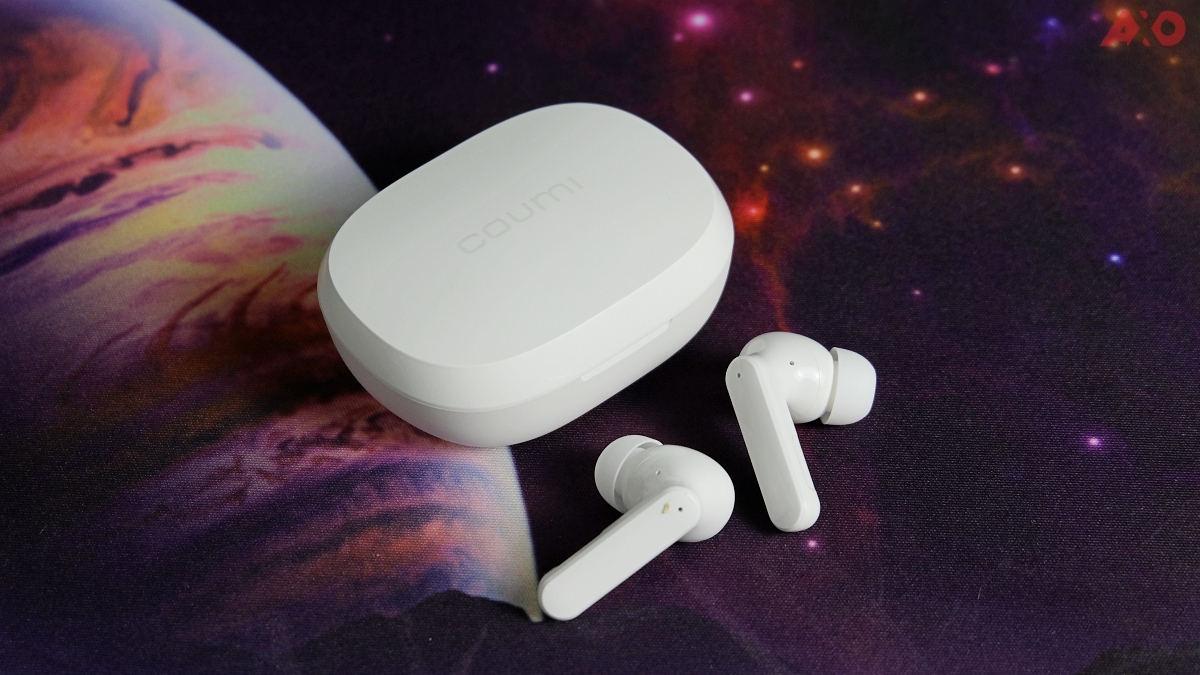 This is the Coumi Freedom Dots, and it is a pair of TWS earbuds that feature hybrid active noise cancellation technology, along with a Transparency Mode, as well as punchy bass. It also features 6 Environmental Noise Cancellation (ENC) microphones to allow for better communications and calls. Let’s see what else the Freedom Dots has to offer in this review, but first, let’s go through the specs.

The Coumi Freedom Dots has a rather large footprint as the charging case itself is quite sizable. The exterior is furnished with a smooth, matte finish except for the upper lid outer ring area. This section has a glossy finish to give it an extra grip when opening the top lid of the charging case. There is also a groove on the front to assist with the lid opening too.

On the back, there’s the USB Type-C port for charging, along with a status LED to show charging/battery status. Moving inside the charging case you get the earbuds themselves, along with one status LED for each side, as well as the pairing button right in between them.

For the earbuds themselves, they have a glossy finish for that extra grip. And, the stems are rather large and thick. There are status LEDs on the side, as well as L/R indicators on the inside, coupled with the magnetic charging touch points. It’s easy to pick up from the charging case, and fits right into the ear nicely (as long as you make sure your eartips are of the right size).

The Coumi Freedom Dots fits well in the ears, stays in place, and it doesn’t make me experience audio fatigue after long hours of usage. The stem is rather large, but it manages to stay away from my face to avoid annoying me when listening to music. That being said, when exercising due to all that movement, the earbuds might slip into place and the stem might touch the side of your face. It is IPX7 rated, so there’s no damage to the earbuds. But, you might be annoyed that it does that.

Pairing this with my Asus Zenfone 8, the process took less than a minute. All I had to do was open up the top lid, go to the Bluetooth settings, tap on the Freedom Dots, and I’m connected. There is no app required for the setup process, but it would’ve been nice for firmware updates and equalizer/touch control tweaking.

In terms of connectivity, the Coumi Freedom Dots does have Bluetooth 5.2, but it only supports connecting to one device at a time, so no multipoint here. The charging case is a little too big for me, compared to the smaller TWS earbuds cases that I’m more used to. However, that’s not a bad thing, because it does make it easier to find and track in my bag.

The Coumi Freedom Dots uses a responsive pressure sensor for music controls, and to be honest, I’m not a big fan of this idea. Touch controls are more accurate and responsive, whereas the force sensor I’ve used just takes a lot more effort and energy to get right. It works well, just not my preferred way of navigating the earbuds.

Using a 12.5mm large- aperture dynamic driver, the Coumi Freedom Dots has overall decent audio performance. The highs are crystal clear, but there can be audible distortion when playing music at loud volumes. The mids are decent, which is great for acoustics or dialogues, but the bass is a bit too overwhelming. For those of you who like bassy tunes, you won’t be disappointed. Music listening is great, but there is a short delay in terms of latency, when it comes to movies and gaming. It’s not very noticeable, so for the untrained eye, this should be a non-issue.

The Coumi Freedom Dots comes with hybrid ANC, and that gives you full concentration mode, or transparency mode where you can hear your music and your surroundings clearly at the same time. With the help of the six ENC microphones, the ANC works well in tuning out unwanted noise. With ANC turned on, I could still hear my hands clapping, but I can’t hear the hairdryer, or the roaring thunder outside during the heavy rain.

Transparency Mode works as intended, as I am able to hear my wife speaking to me, along with keyboard’s typing sounds. The pickup volume is loud enough, but unfortunately, transparency mode levels are not customizable.

The Coumi Freedom Dots comes packed with a total of six ENC microphones, and I’d say it paid off. Not only does it help with the active noise cancellation, calls are also clear on both caller and receiver side. My voice has been described as clear yet bassy, which is good in terms of communication quality.

The Coumi Freedom Dots, on a single charge could last me for about 5 and a half hours. With the charging case, I get about 22 hours and 50 minutes of music playback. However, do note that I listen to music at the 75% volume mark, with ANC turned on almost the entire time. So if you listen to music at a lower volume with ANC turned off, you might be able to squeeze a little more juice out of the battery.

When charging the case, the case does get a bit warm. So, when you do charge it, be sure to just leave it for a while before picking them up or wearing it. This might just be due to the quick charge feature. Also, there is no wireless charging supported, so you’ll have to recharge using only the USB Type-C cable.

The Coumi Freedom Dots offer great value for a pair of TWS earbuds that has ANC built right in. The sound performance is decent, it offers great battery life, and it has certain features found in higher end TWS earbuds. That being said, it does have its drawbacks too. There is no app control, no further customization to settings or audio preference, and the force sensor is a little hard to use.

Even so, the price the Coumi Freedom Dots is listed at is too good to overlook all those features, as they’re just wants and not needs. In terms of needs, the Freedom Dots covers pretty much the basics of a TWS earbuds.