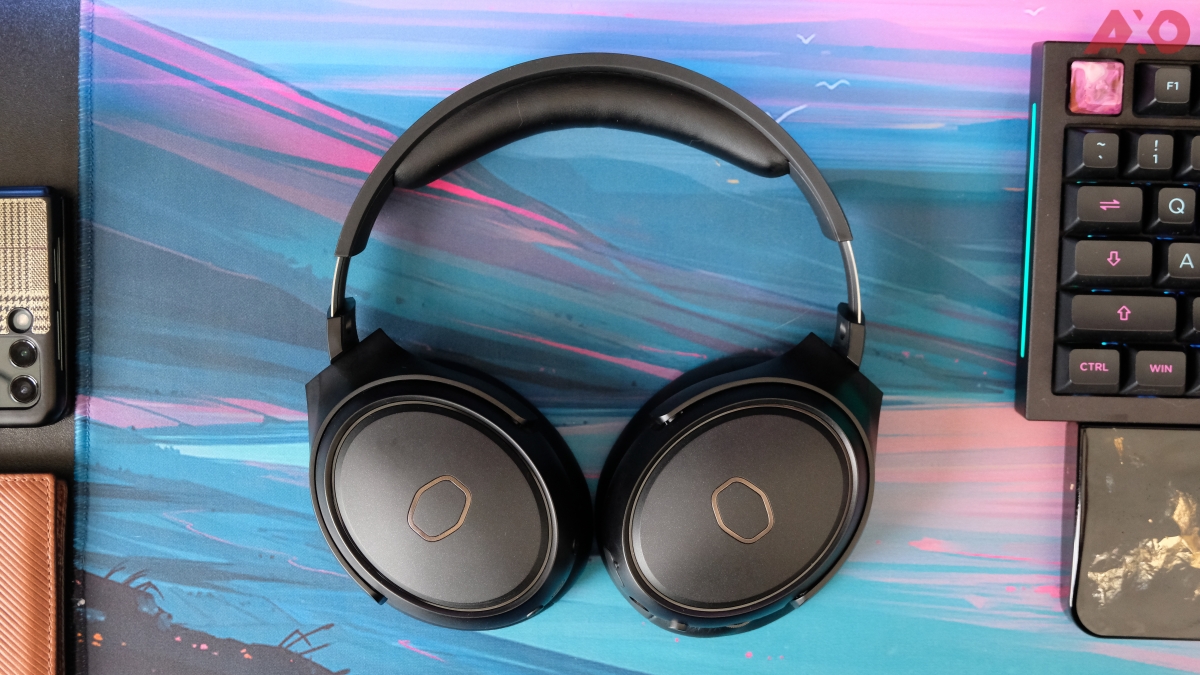 The Cooler Master MH670 are the company’s latest wireless headphone offering, and it’s packing quite a punch, ditching the cables. It’s quite the package, considering the great sound it offers, companion software, dedicated microphone, and flexibility. Before we get into the review, let’s go through the specs first.

In terms of design, the Cooler Master MH670 wireless headphones comes in a full black exterior with a mix of plastic on most of the body, and leatherette on the earcups. The band itself is made out of metal, encased in plastic that has a plush cushion for added comfort on the top of the head. The earcups on the other hand, is lined with leatherette and while it’s comfortable on the ears, it does get bit warm after a while.

The availability of controls that are on the headphones itself is quite complete, and you can control pretty much everything from there. They’re all well positioned, except for the on/off button.

In terms of comfort, the Cooler Master MH670 is a bit on the heavy side, but it doesn’t affect the overall comfort, even after long hours of use. You can feel it’s on your head, but it doesn’t really bother you in any way. The headphones are quite top heavy, so if you tilt your head forward, the top may slide off if you didn’t adjust it tight enough.

The earcups do swivel, so you can rest them on your shoulders no problem. But remember to swivel the earcups when you do, if you don’t, you’ll end up having the microphone poking your nose. And also because the headphones have quite a narrow headspace, it’s quite a tight fit around your neck too.

The leatherette earcups do get warm after a while, so if you manage to find mesh fabric replacements, I would recommend using those instead. The earcup cushions are also easily removable for easier cleaning too.

I’ve been using the Cooler Master MH670 for a while now, and it’s been a pleasurable experience. It works right out of the box as soon as the 2.4GHz dongle is plugged into the PC. The power button is angled a bit weird, but it’s fine. The microphone toggle is extremely useful and you can easily distinguish if it’s on mute or not from the height of the button.

One thing I noticed is that the power button takes too long to turn on/off. It requires about 3 to 4 seconds to change power status. Also, if there’s music playing, pressing the power button won’t turn the headphones off. You’ll need to pause your music to do that.

The microphone works great, and it’s rigid enough to be adjusted to stay in whatever angle you position it in. And because the volume scroll wheel doesn’t change the Windows volume, you can just set Windows to be at 100% volume, and manually adjust your preferred audio levels on the headphones itself.

Another great thing about the Cooler Master MH670 is the fact that it can be used with the MasterPlus software. You can tweak almost everything from the audio, to choosing preset EQ settings, perform firmware updates, and also adjust the surround sound settings. Too bad there aren’t any settings for the microphone, but they work just fine, which we’ll get to in a bit.

When it comes to the audio department, the Cooler Master MH670 really packs a punch in all audio aspects. It has great volume levels, and some really punchy bass that you can actually feel. The highs are bright but they tend to get distorted at high volume levels, while the mids are amazing for vocal performance.

I’ve really enjoyed listening to music and having my gaming sessions on Discord with the MH670. They sound great, and are very reliable when it comes to wireless connectivity.

Call quality wise, the microphone works great and it’s described as “clear and consistent”. No audio cut offs, and there’s great volume. It works well with Discord and all the other online conferencing tools I use as well.

Battery life is one of the most impressive aspects of the Cooler Master MH670. On a single charge, using it pretty hardcore the entire day for video calls and gaming sessions, i could still get four days worth of usage. Of course, there’s no RGB lighting to drain off the battery, but still, that’s pretty impressive considering my volume levels are constantly above 50%.

The only downside I see is that it still uses a microUSB for charging instead of USB Type-C. It’s not so much charging speed because it still charges relatively fast overnight, but the convenience since most of my peripherals have already been transitioned to USB Type-C. Cooler Master, maybe in the MH670 v2 with quick charge?

The Cooler Master MH670 is a great option for anyone who wants to get onto wireless audio for their PC setup, especially those who don’t trust Bluetooth connections like me. It’s solidly built, it looks sleek, and it has an amazing battery life that lasts for days, literally. For RM395, the MH670 offers amazing value for its features, and it’s considerably more affordable than other 2.4GHz wireless headphones out in the market.

In this article:audio, Cooler Master, Review

Cooler Master launches its new storage line with the Oracle Air. Built on the NVME M.2 technology, the Oracle Air is an M.2 SSD...