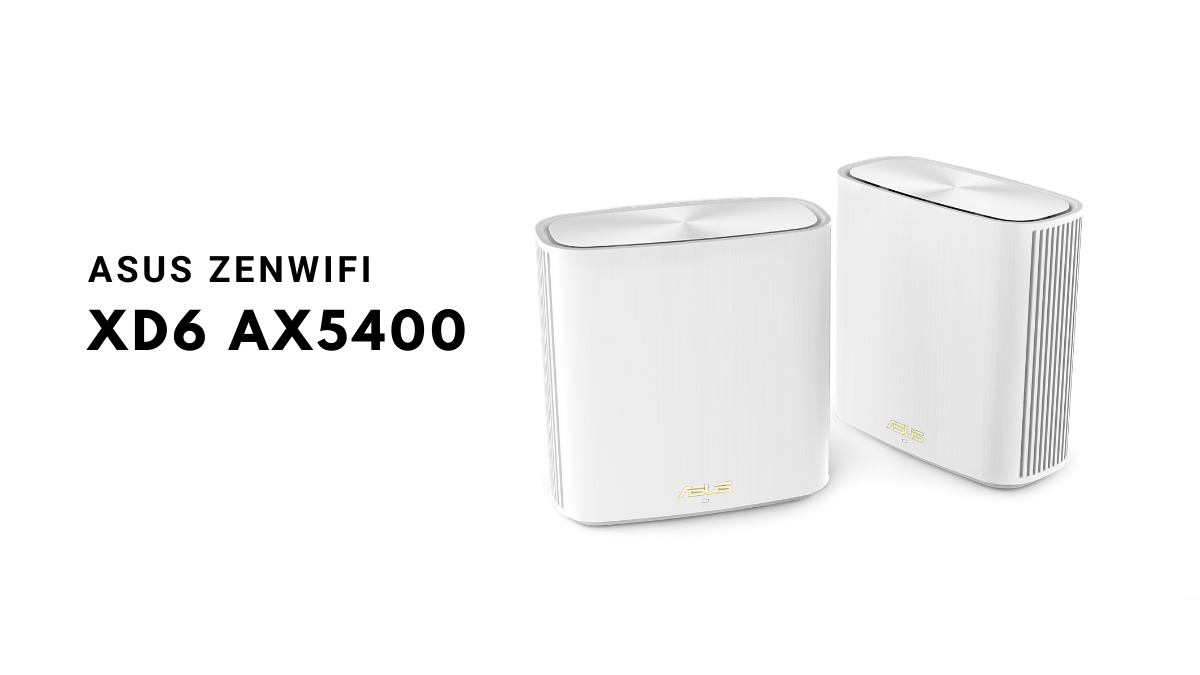 The ASUS ZenWiFi XD6 system was announced at CES 2021, and it includes two dual-band nodes that cover up to 5400 square feet of living space with data rates approaching 5400Mbps on the 2.4GHz and 5GHz frequency bands. It brings the WiFi 6 mesh networking experience to more homes, and it is now available in Malaysia.

Thanks to the improvements in the WiFi 6 protocol, we can support higher data rates across both the 2.4GHz and 5GHz frequency bands, leading to aggregate wireless speeds of up to 5400Mbps from the ASUS ZenWiFi XD6 system.

The WiFi 6 standard also incorporates features like Orthogonal Frequency-Division Multiple Access (OFDMA) and multi-user, multiple input, multiple output (MU-MIMO), which improve efficiency. The idea is to support more devices with a consistent experience, like what you’d expect from a cellular network.

Thanks to the improvements in the WiFi 6 protocol, we can support higher data rates across both the 2.4GHz and 5GHz frequency bands, leading to aggregate wireless speeds of up to 5400Mbps from the ASUS ZenWiFi XD6 system.

The WiFi 6 standard also incorporates features like Orthogonal Frequency-Division Multiple Access (OFDMA) and multi-user, multiple input, multiple output (MU-MIMO), which improve efficiency. The idea is to support more devices with a consistent experience, like what you’d expect from a cellular network.

The ASUS ZenWiFi XD6 uses OFDMA to break chunks of the frequency spectrum, called channels, into smaller resource units. Data that’s packed into these subchannels and transmitted simultaneously doesn’t incur as much overhead compared to older WiFi standards, reducing latency in a meaningful way. In fact, OFDMA’s impact is so significant that it’s sometimes cited as WiFi 6’s most important feature.

Each of the ASUS ZenWiFi XD6’s two wireless nodes are built to sustain this performance with a 1.5GHz triple-core processor. Both nodes feature three Gigabit Ethernet ports for hard-wired devices like desktop PCs and gaming consoles, along with a fourth port that can handle WAN or LAN duties. The ASUS ZenWiFi XD6 system supports both wireless and wired backhaul, and connecting the two units via Ethernet will devote all of the system’s wireless bandwidth to client traffic.

The best way to shield your online actions from prying eyes is to reach the internet through a secure connection with a server you trust. Some virtual private networks, or VPNs, are paid services. Free alternatives might sell your browsing history to third parties, hit you with ads, or throttle your speed.

We let you avoid these pitfalls with a handy way to set up your own VPN, available from your ASUS ZenWiFi XD6 system at no extra charge. A new ASUS app for iOS and Android called Instant Guard transfers your router’s profile with the press of a button and creates the VPN. Before you jump online, simply open Instant Guard on your mobile device and select your ASUS ZenWiFi XD6 system to instantly make a secure connection.

With Instant Guard enabled, all of your communications will safely travel back and forth through your home router. And if you enable the AiProtection Pro suite, you’ll enjoy its protection against outside network threats in tandem with Instant Guard.

Threats to your network don’t just come from the outside. You want dynamic protection for devices on your network that’s able to keep pace with the changing security landscape. The AiProtection Pro security suite bundled with our ASUS ZenWiFi XD6 scans incoming and outgoing traffic to intercept common attacks, it blocks access to known malicious websites, and it detects infected devices on your network, severing their unsanctioned ties to outside servers. AiProtection Pro pulls its intelligence from Trend Micro’s database, which is regularly refreshed to keep the protection current.

Integrated parental controls keep your family safe without the burden of a monthly subscription. Right out of the box you can apply age-based profiles that restricts access to certain services. Kids under 12, for example, are blocked from social media, while teenagers are kept away from gambling sites. A more granular content filter lets you tailor those settings to taste.

Connecting to the ASUS ZenWiFi XD6 with a WiFi 6-capable smartphone or laptop gets you stronger security from WiFi Protected Access 3—the latest protocol designed to keep unauthorized users from gaining access to your network.

The ASUS ZenWiFi XD6 supports easy setup with the ASUS Router app for iOS and Android. Simply unbox the pre-paired units, plug them into power at their locations, and fire up the app to finish setup in just a few quick steps.

Our new ASUS ZenWiFi XD6 was designed to deliver a consistent wireless networking experience with WiFi 6, regardless of how many devices you attach. We precisely engineered each node’s housing, carefully laying out six antennas, plenty of Gigabit Ethernet ports, and a triple-core CPU. Between its 2.4 and 5 GHz frequency bands, the ASUS ZenWiFi XD6 system is rated for almost 5400 Mbps of aggregate speed across up to 5400 square feet of coverage.

It wasn’t enough for us to build great hardware, though. We also protect your home network with the free AiProtection Pro security suite and its perpetual updates. Our ASUS Router app gives you access to all of the ASUS ZenWiFi XD6’s settings from your mobile device. And the Instant Guard app simplifies the VPN setup process so anyone can have their own encrypted connection on iOS or Android devices. Thanks to its strong performance and extensive security features, the ASUS ZenWiFi XD6 system is an ideal midrange mesh networking partner.