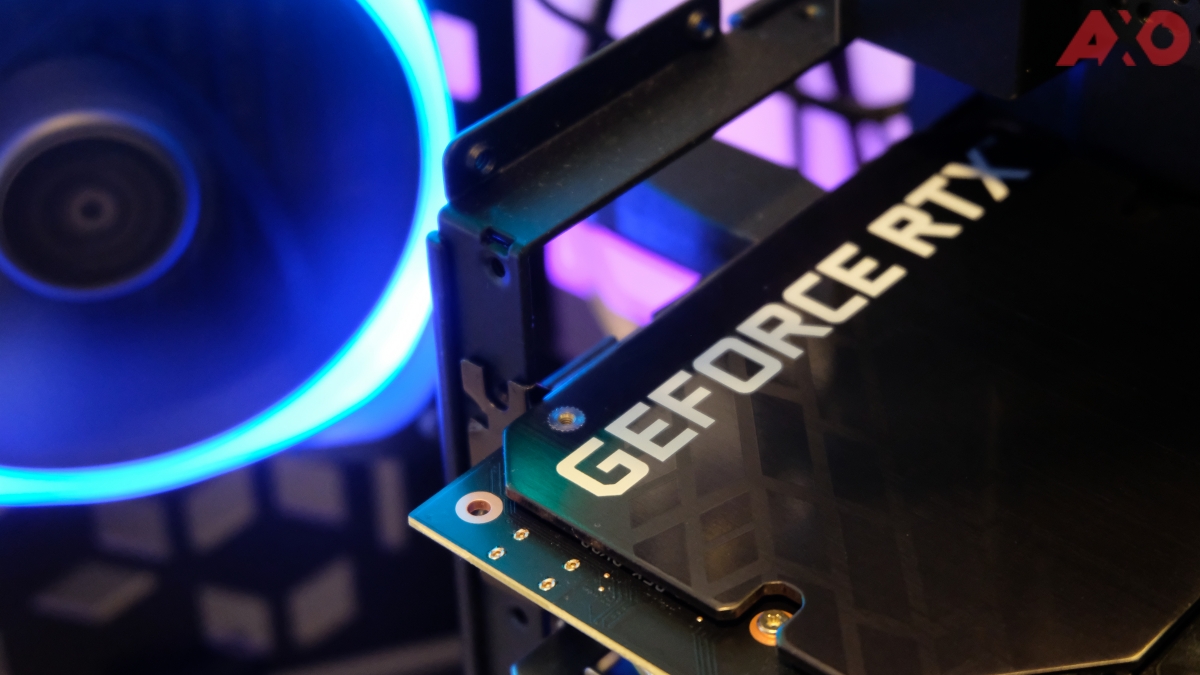 This is the Asus TUF Gaming RTX 3080 Ti GPU, and yes, we’ve reviewed the OC edition before, you can check it out right here. Now, the Ti version is obviously an improved version of the stock RTX 3080, and improved from the OC version of the card. Slightly below the best of the best RTX 3090 Ti, but it’s still a high end GPU nonetheless. Let’s take a look at the GPU itself before we get into the nitty gritty numbers.

What can I tell you? The Asus TUF Gaming RTX 3080 Ti GPU has almost the same exact design as the OC version. It still has the all-metal shroud that houses three axial-tech fans for better cooling. It still uses the durable TUF components (top-shelf chokes MOSFETS, military-grade capacitors), Auto-Extreme Technology, a new GPU bracket, and also a backplate vent for better ventilation and heat dissipation.

Aesthetics wise, the TUF Gaming logo is still persistent throughout the GPU. Even the RGB strip is the exact same, and no, you don’t get additional RGB lighting areas. Similar to the OC version, these RGB lights are all customizable within ASUS’ Armoury Crate software.

Right above it, there are two 8-pin connectors, along with two onboard LEDs that light up if the PSU PCIe power connectors aren’t connected properly. There’s also a “performance” and “quiet” switch at the top of the card on the back. Connectivity wise, the GPU comes with three DisplayPort 1.4a ports, along with two HDMI 2.1 ports.

The Asus TUF Gaming RTX 3080 Ti GPU has three axial-tech fans that takes advantage of using durable dual ball fan bearings. The integrated rim improves static pressure, and the two side fans spin counterclockwise to reduce turbulence, as well as to eliminate noise. At low temps, all three fans will gradually come to a halt. Underneath the fan are independent heatsinks for the GPU and memory.

The back section of the card has a few cutouts in the metal backplate to allow for more air to flow through the radiator. It is a rather thick GPU with a 2.7 slot width. There’s a metal shroud surrounding the front of the Asus TUF Gaming RTX 3080 Ti card, and it covers half the radiator fins and heatpipes. The back of the card has a thick metal plate that covers most of the GPU’s sensitive bits, with the back of the GPU’s mounting bracket being exposed.

There’s also a second heatsink that is attached to the GDDR6X chips. The VRMs have additional contact surfaces on both the VRAM heatsink and the main heatsink. These do attach to the VRMs VRAM via four strips of cooling pads.

Temperature wise, the Asus TUF Gaming RTX 3080 Ti GPU does a great job at keeping itself at sub-70-degrees on a hot day. On idle, temperatures average out at 40-degrees, while gaming will see the temperature go up to about 69-degrees. In terms of noise, it still stays relatively quiet, even when gaming. It’s similar to a stand fan on lowest speed, and so far it hasn’t reached a point where I’ve felt the noise annoyed me.

For synthetic benchmarks, we ran the Asus TUF Gaming RTX 3080 Ti through the Time Spy test available in 3DMark, and here are the scores. They did pretty well overall, as expected for a Ti variant of the RTX 3080 card.

We ran a couple of games and benchmarks on the ASUS TUF Gaming RTX 3080 Ti GPU, and here are the results. Overall, games performed smoothly with no screen tearing whatsoever, and the visuals are just out of this world on 4K and 2K resolutions. All games were tested on the default Gaming Mode setting (1785MHz GPU Boost), and with OC Mode, you can get another ~30MHz.

For this round, we had more time with the GPU so we actually did go with doing the 1080p tests just because we can. It did really well, and we’ve had no complaints about it. The card had no problem handling Full HD gaming, so if you’re satisfied with FHD gaming and wish to traverse into say, 2K gaming, you’re more than welcome to do so with the Asus TUF Gaming RTX 3080 Ti GPU.

Asus really has a way with making premium Nvidia cards better than they already are stock. Of course, I’d love to see more RGB lighting on the Asus TUF Gaming RTX 3080 Ti, but at the end of the day, it’s the performance that counts, right? The card features a more subtle, understated design, but manages to keep all of that raw power in check, along with good temperatures, and somewhat quiet performance. Its performance is close to an RTX 3090, it still has the latest RTX and DLSS tech from Nvidia, and comes with a dual BIOS setup.

ASUS Republic of Gamers (ROG) today announced its latest range of gaming peripherals and accessories during the ROG For Those Who Dare: Maxed Out...