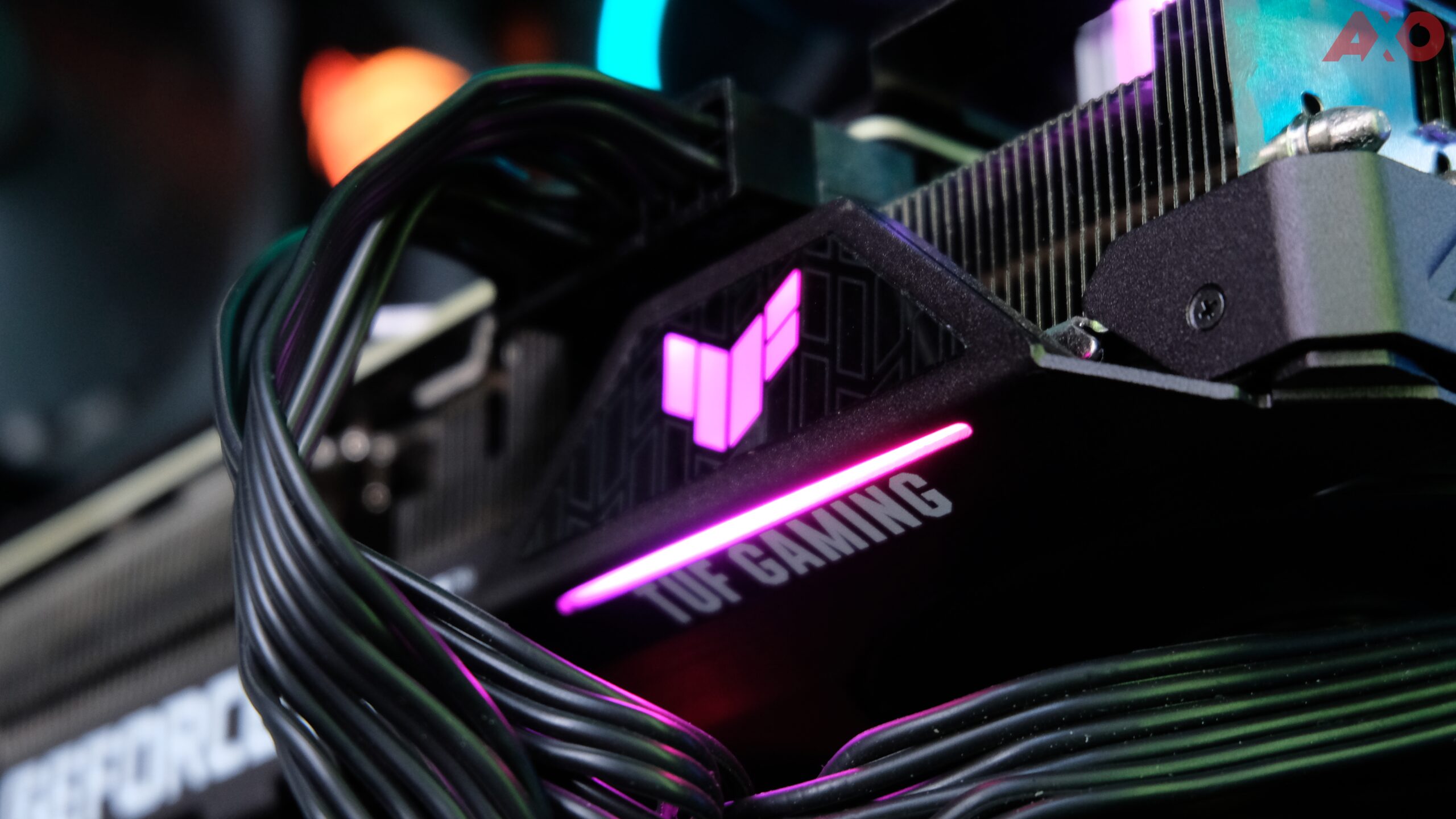 The Asus TUF Gaming RTX 3080 OC GPU has graced our studios with its presence, being the first third-party AIB (add-in board) for the GeForce RTX 3080. The RTX series is one of the biggest leaps in GPU history, and that is translated into the RTX 3080 we have in our hands, from Asus under the TUF Gaming series. The GPU adds improved cooling and some RGB goodness to an already impressive hardware. What about the specs?

Throughout the GPU, you’ll see the TUF Gaming pattern on the all-aluminium shroud, with the TUF Gaming logo on the bottom side of the board, upperlined with a small RGB strip. On the top side, you get a small TUF Gaming logo badge that can be lit up with RGB. All customizable within ASUS’ Armoury Crate software.

Right above it, there are two 8-pin connectors, along with two onboard LEDs that light up if the PSU PCIe power connectors aren’t connected properly. There’s also a “performance” and “quiet” switch at the top of the card on the back.

Connectivity wise, the GPU comes with three DisplayPort 1.4a ports, along with two HDMI 2.1 ports. Seeing as how HDMI 2.1 is the new interface with higher bandwidth, it’s good to see ASUS implementing this in the TUF Gaming series.

As mentioned above, the GPU has three axial-tech fans that aim to improve cooling, and it does! These fans take advantage of using durable dual ball fan bearings, as opposed to the traditional sleeve bearings. They have an integrated rim that improves static pressure, and the two side fans spin counterclockwise to reduce turbulence, as well as to eliminate noise. At low temps, all three fans will come to a halt. Underneath the fan are independent heatsinks for the GPU and memory.

The back section of the card has a few cutouts in the metal backplate to allow for more air to flow through the radiator. It is a rather thick GPU with a 2.7 slot width, measuring slightly bigger than the Founder’s Edition in terms of both length and height. So, if you’re considering this for a compact build, you need to look elsewhere.

There’s a metal shroud surrounding the front of the TUF Gaming RTX 3080 OC card, and it covers half the radiator fins and heatpipes. This helps direct the airflow through the fins to achieve better cooling. The back of the card has a thick metal plate that covers most of the GPU’s sensitive bits, with the back of the GPU’s mounting bracket being exposed. The radiator and heatpipes have “MaxContact”, which has a smooth and shiny surface to ensure efficient heat transfers. There are six heatpipes leading out from the large GPU contact to two sets of radiator fins, giving the GPU ample amount of space to dissipate heat.

There’s also a second heatsink that is attached to the GDDR6X chips. The VRMs have additional contact surfaces on both the VRAM heatsink and the main heatsink. These do attach to the VRMs VRAM via four strips of cooling pads.

For synthetic benchmarks, we ran the GPU through the tests available in 3DMark, and here are the scores. They did pretty well overall, as expected, even in the Ultra variants of the tests.

We ran a couple of games and benchmarks on the TUF Gaming RTX 3080 OC GPU, and here are the results. Overall, games performed smoothly with no screen tearing whatsoever, and the visuals are just out of this world on 4K and 2K resolutions. All games were tested on the default Gaming Mode setting (1785MHz GPU Boost), and with OC Mode, you can get another ~30MHz.

We didn’t do 1080p benchmarks because you probably won’t be spending so much money on a GPU like this just to play at 1080p right? So, there’s that. Now moving on to thermals.

The Asus TUF Gaming RTX 3080 OC is a great alternative to the Nvidia’s Founder Edition card. Its stock performance is already better than the Nvidia Founder’s Edition, and while the OC FPS isn’t really noticeable, it’s nice to have the option to Overclock. It’s cool and quiet, and is a great choice if you want a GPU that you can just throw into your PC and forget about it, and not worry about performance.

The only drawback we see is the price, how scarce it can be in the current market, and the amount of space you need to fit this GPU into your PC. If you’re an full-sized ATX tower, then it should be fine. But anything below that, you’ll need to get your rulers out and start measuring.

Once the GPU market stables down and supplies return to normal, then hopefully you’ll be able to snag one for yourself, and embrace 4K gaming.

Learn More
In this article:GPU, Review

The LUMOS ATOM is the latest portable projector in Lumos’ series of home cinema projectors, following the LUMOS NANO that we have tested and...