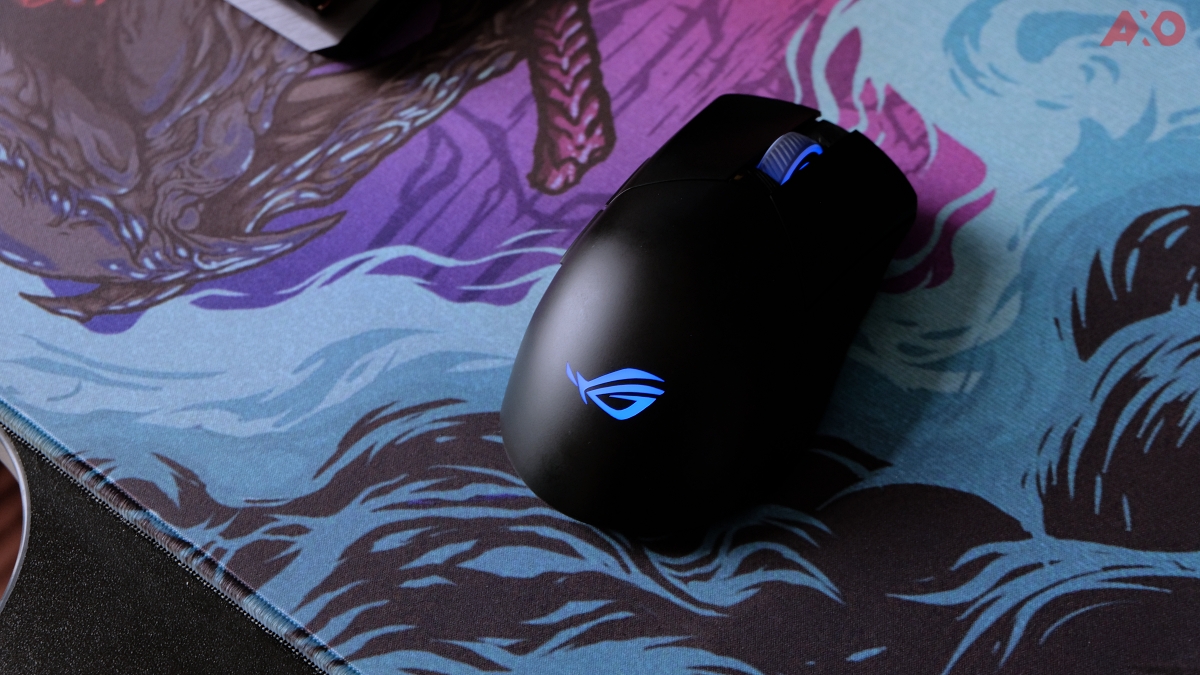 Launched fresh from the ROG HQ, the Asus ROG Gladius III Wireless gaming mouse is the company’s latest optical gaming mouse, launched alongside the ROG Claymore II mechanical keyboard. The first Gladius model was launched back in 2014, and we are now at the third iteration of the series, complete with a wireless version (Yes, there is a wired version that is 10g lighter). Before we get into the review, let’s go through some specs.

The ROG Gladius III Wireless has a rather, simple design if you’re looking at it from the top. There’s the left and right clicks, with the illuminated scroll wheel and ROG logo. Turn to the left, then you’ll see the laser-etched ROG design, which is also illuminated. The mouse is only 89g, which is relatively standard seeing how manufacturers are now aiming to make lightweight gaming mice.

There are also two extra buttons on the left, which feature hot-swappable switches. On the bottom, the mouse utilizes four PTFE feet which ensures smooth gliding. You will also find the on-the-fly profile button, pairing button, and also the switch toggle for on/off, Bluetooth connection, and 2.4GHz wireless connection. On the front, you get the USB Type-C port for charging and wired connection move.

The entire mouse is made of ligthweight plastic, but it does have a certain premium feel to it. Build quality is acceptable, there’s no flexing present, and the bottom rear part also has a storage hole to keep the wireless dongle when not in use. The provided cable is also made of Paracord, so that makes for better endurance.

In terms of grip, the ROG Gladius III Wireless is designed to cater to palm, claw, and also fingertip grip styles.

I am a palm grip user, so the mouse does fit my hands somewhat nicely. That being said, I do wish that the mouse was designed slightly bigger, because for my use case, it’s on the verge of making me use it fingertip style. The mouse surface materials do offer a good grip, even on the sides, and the PTFE feet does ensure smooth gliding on my mousepad. It’s also nice that Asus made them easily replaceable.

The side buttons are a little stiff to press, but they can be swapped out if you prefer a smoother switch below it. Setting up the mouse is fairly easy, just set it to either Bluetooth or 2.4GHz wireless. If you’re using Bluetooth, you need to press the pair button, and connect the device through Windows settings. If you prefer 2.4GHz wireless (my preferred mode), you’ll need to plug in the dongle, turn it on, and it’ll automatically recognize the mouse on Windows.

After using it for the entire day, the mouse doesn’t get warm from the RGB lighting, and it resists fingerprint stains and smudges very well too. Although, you might want to keep a brush handy, in case the laser-etched area collects stain and dust. Do note that this mouse is not ambidextrous, it is made for right-handed gamers, and there is no left-handed version.

As a day-to-day mouse, the ROG Gladius III Wireless does offer excellent levels of comfort, and swift responsiveness. But, its true calling lies within gaming.

The ROG Gladius III Wireless is equipped with a PixArt PAW3370 sensor, with DPI levels of up to 19K, which can still be tweaked to 26K (if you need DPI that high). The mouse is targeted for all gamers from all sort of games. It features hot-swappable omron switch sockets, which lets you use 3-pin mechanical and 5-pin omron optical switches.

In wired mode, the mouse performs as expected, but what surprised us was the wireless connection – it was flawless. There were no jittering or lagging when gaming, and the mouse was still very responsive, as if I was using it in wired mode. There’s no real-life difference between using it in wired and wireless mode, other than the fact that the wired cable might drag on your table surface a little.

The two side buttons are somewhat reachable. The first button is a little too far front for my thumbs, but the back button is just nice. The mouse has great lift-off distance, and the sensor stayed consistent on its current position (cursor doesn’t simply move around on its own). The DPI button is also very accessible, allowing you to toggle DPI levels on-the-fly.

Being an ROG peripheral, the ROG Gladius III Wireless is obviously compatible with the company’s Armoury Crate software. Unfortunately, I had some issues with the software, and Armoury Crate admittedly still needs a lot of work. At times, I had trouble finding the mouse, so customizing the mouse depended on my luck of the software finding the device. Even if the mouse is recognized, it takes quite a while to load the customization screen too.

As for customization, when Armoury Crate does work, you can set key binding, set DPI levels, adjust angle snapping and button response, and even set polling rate. The six programmable buttons on the mouse can all be set in here as well, along with the three RGB lighting zones – ROG logo, scroll wheel, side ROG styling area.

When a firmware update is available, Armoury Crate is also where you’d want to go to. To manage the mouse better, there are also power saving options to allow the mouse to perform longer. You can set a timer for when Sleep Mode should activate, or when the Lighting Alert should light up to notify on battery depletion.

When it comes to battery life, the ROG Gladius III Wireless performs remarkably, as it lasted us for about a whole week in real-world usage. If we were to calculate hours of usage, it gave us about 27 hours, which is somewhat close to Asus’ claims of 31 hours in 2.4GHz wireless mode (with RGB on, because we never turn off RGB. In Bluetooth mode, the mouse could last longer at about 42 hours, but it’s not our preferred choice of connection (it’s a personal stigma thing).

Plugging in the ROG Paracord cable, you could use the mouse in wired mode, but the cable is a bit stiff, so you might experience a little drag. Recharging the mouse back to 100% is pretty, takes roughly an hour.

The ROG Gladius III Wireless is a high-end gaming mouse, with top-of-the-line specs, and a minimalist design that doesn’t forego the gamer-esque aesthetics. This mouse is asymmetrical, made for gamers with grips of all types, and has six programmable buttons. Not the most available in the market, but enough to get the job done. The DPI levels are more than enough to power your arsenal, and the RGB lighting is subtle, yet elegant to match any gaming/streaming setup.

To me, the best feature is the freedom in choosing Bluetooth or 2.4GHz wireless modes. With just a flick of a switch, I can switch from 2.4GHz mode gaming at home, to Bluetooth mode when I’m travelling. Because the mouse only weighs 89g, it doesn’t feel like a burden in your laptop too. Priced at RM439, I think the ROG Gladius III Wireless gaming mouse is a worth investment to add to your ROG ecosystem. If you really don’t need the wireless version, there’s the wired variant that’s only priced at RM299.