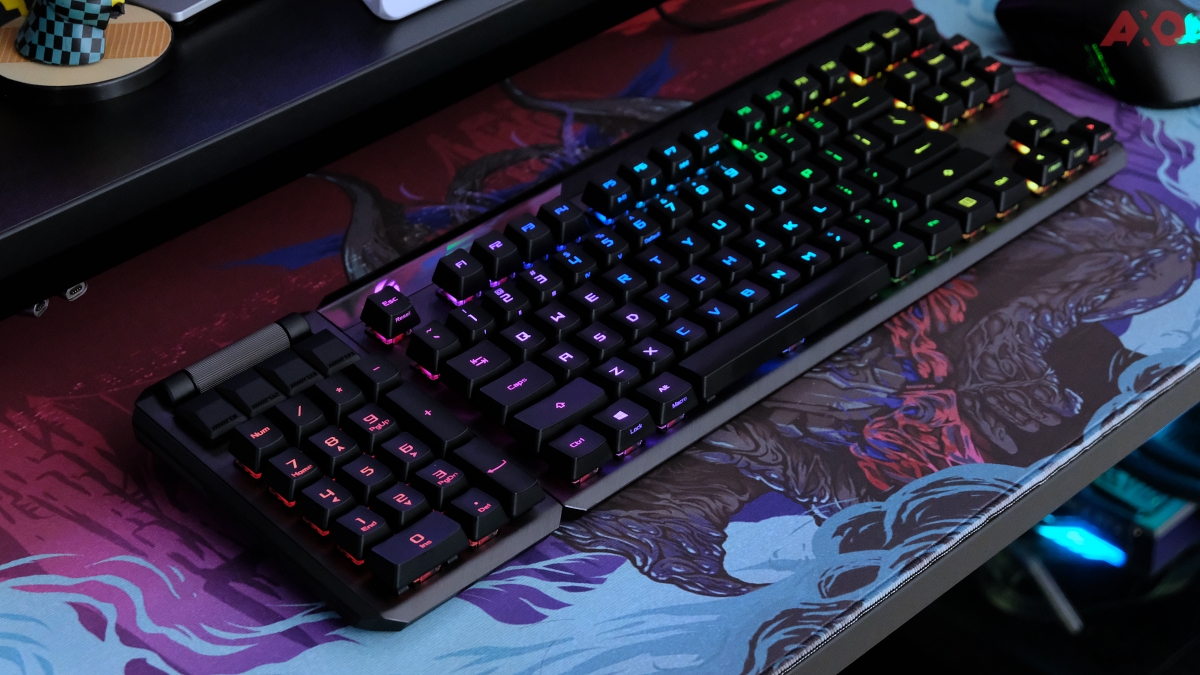 This is the Asus ROG Claymore II, which is the second ROG keyboard we’ve ever gotten on our hands. The first being the ROG Strix Flare, which was released years ago. Moving from flagship to flagship, the ROG Claymore II definitely stepped up by quite a few steps from the ROG Strix Flare. Modularity on a keyboard isn’t very common, as other gaming peripheral manufacturers don’t offer such a feature. So we were pretty excited that Asus released such a product, and was kind enough to send a unit over for review.

The ROG Claymore II features a two-toned colour scheme on the case, which is in line with the other ROG products released recently. The case also has an angled, brushed finish to its aluminium frame. On the top, there’s a two layer plastic part, with the top left having the ROG eye design and the four-bar battery indicator for battery level and charging status. The edges are beveled, and the corners are cut to give off the gamer-esque design.

The most special thing about the ROG Claymore II is its modularity, where it can transform into a TKL keyboard when you don’t need the numpad, and a full-size keyboard when the numpad is attached. The TKL section of the keyboard is of an 87-key US ANSI layout, while the numpad has plastic covers on both sides which can be removed, depending on which side of the keyboard you wanted to attach it to. There are also guide rails in the keyboard to further strengthen the connection, and electrical pads for data and power transfer.

To connect the numpad, just remove the plastic covers, slide the numpad in from the mid-top section, and once it locks into place, you’re ready to go. You can do this on either side of the keyboard, standard full-size layout or southpaw layout, it’s entirely up to you. The numpad also has a volume rocker on the top section, with the macro keys right below it.

On the bottom of the keyboard, you see another large section that is covered with the ROG Eye logo, as well as two feet for angle adjustment. The numpad on the other hand, has a single larger foot that adjust to the same angle. These feet all have rubber padding on the bottom to prevent any slipping, or gliding. Right above the certification sticker, you will also find a small hole to tuck away the 2.4GHz wireless dongle. On the top, there’s a USB Type-a passthrough port, the on/off switch, and the USB Type-C port. You can choose to either use it in wireless mode, or in wired mode with the USB Type-C connector.

When it comes to the keycaps, these have a rather unique profile as it is somewhere in between the common OEM profile and shorter Cherry profile. Compared to the OEM profile, it’s shorter by 1mm, which Asus claims is done for aesthetics to accommodate the thicker cases as well. It’s not hard to get used to, as it’s pretty similar to OEM/Cherry profile keycaps.

The keycaps are made out of ABS plastic, with a 1.2mm thickness. They are prone to oil, so you might want to keep a microfiber cloth near you to wipe it from time to time. The laser-etched legends are, with pretty even light distribution. Flipping the keycaps over, is a different crosspoint stem keycap compared to normal “+” sign Cherry MX style keycaps. There are four stems in the corner, with the middle being hollow for central backlighting. Unfortunately, this also means you will not be able to swap the keycaps out for a keycap set of your choice.

To go with those new keycaps, Asus implemented their latest ROG RX optical mechanical switches in the ROG Claymore II. We got ours in the Red (linear) variant. Compared to your standard Cherry/Gateron/Kailh switches, these ROG RX optical switches sport an entirely different design from the housing to the stem, and even the slider mechanism. You can see the LED module right down the middle, and this is said to have better “light diffusability”.

These optical switches are hot-swappable, but it is highly recommended not to do so. The retaining clips are fit very tightly onto the aluminum frame, and removing them may cause damage to the switch. Even if you manage to get the switches out successfully, you won’t have other ROG RX switches to replace them with since they aren’t sold separately for now.

The ROG Claymore II does of course use ROG’s all-in-one software hub – Armoury Crate. Synchronization works well with other ROG products in your ecosystem, but there are problems which lie with the software and not the product. Almost everything is customizable, and all is done with the Armoury Crate software. You can perform firmware updates, change RGB lighting modes, set macros, tweak shortcut keys, and more. The software is good enough for general use, but if you want more detailed RGB profiles and customization, you’ll need to install the separate AURA Creator software.

When I first start up the ROG Claymore II, it was using the default rainbow wave effect, as with other gaming keyboards. Using just the TKL section, the RGB worked fine, and with the numpad attached, it could instantly recognize and apply the same RGB lighting mode over. The ROG Eye on the top left is indeed backlit, along with the battery indicator. You can however, set the battery indicator light to match the keyboard’s lighting mode, but you’ll lose the ability to view your battery status.

The lighting on the ROG Claymore II is actually really good, and there are no light bleeds from what I can see. Each key is well lit, and provides a nice aesthetical view with the central backlighting through the ROG RX optical switches.

Typing on the ROG Claymore II, it did take a little getting used to. It’s a bit too light for me, and I found myself making a lot of mistakes as well, partially due to the keycaps having too much grip which prevent me from “gliding” from key to key. Even after using it for two weeks, I still find myself making typos. But, when it comes to gaming, the keyboard excels at offering the right amount of grip and control. Long story short, typing – no, gaming – yes.

In terms of sound, the ROG RX switches are somewhat unique to me. I bottom out quite often, with these switches being so light, and I could hear a little downstroke ping from the aluminum plate. The typing sound isn’t as high pitched, and it’s actually deeper than expected, with just a small amount of “thocc”. The insides of the case has the battery compartment as well, which sort of helps the reverberation inside the case. There are no stabilizers, but it is alleviated with the switches itself.

However, there are a couple of disadvantages you should know of too. First, is the price (RM999), where it is a lot higher than other keyboards. If you’re already in the ROG ecosystem, and have a couple of extra bucks to spare, go ahead, it would be a worthy investment. Next, the keycaps are laser-etched ABS so the legends might wear off in the long run, and you can’t switch to any other keycap set of choice. Last but not least, the ROG RX optical switches are not easy to hotswap, so you’re pretty much stuck with what you have.

If you’re okay with just sticking to stock keycaps, switches, and a single keyboard, and want to enjoy the best, most flexible modular mechanical keyboard infused with gaming DNA, the ROG Claymore II is definitely what you’re going to want to go after.