AcerPure Cool 2-In-1 Review: Keeping Your Home Both Clean And Cool 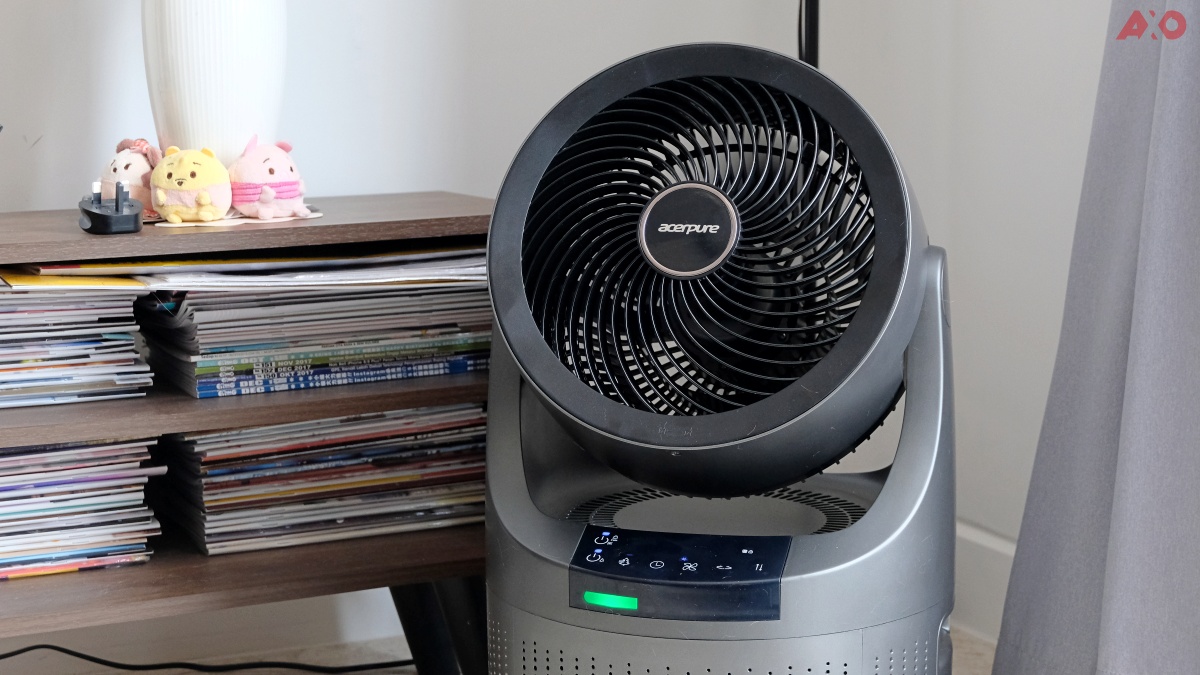 Meet the AcerPure Cool, a 2-in-1 air circulator and purifier. I know, when the name “Acer” is mentioned, the first thing you’ll think is, “Don’t they make laptops?” Well, the company has gone beyond that, and they’ve started creating products that not just compliment your work/gaming setup, but your home as well. The AcerPure Cool is one of those products, created by Acer’s subsidiary, AcerPure.

The AcerPure Cool has a round tubular shape for the bottom, and a 11-inch (28cm) sized fan on the top. The bottom is you can replace the HEPA filter. Not only that, it is also where the fan would draw air in, and purifies it. The purified air will then be blown upwards to the fan, where it will circulate the air in back into the atmosphere in your home. The entire fan is made out of plastic, including the fan blades.

On the bottom, the outside has holes all around the base for air to flow in. Below the base is where the power cable (non-removable) can be found, and there are grooves to route and keep the cables locked in place.

On the sides, there are two handles for you to easily carry it around and move it in your home. On the front, there’s a touch panel that lets you change the AcerPure Cool’s settings. Right below the touch panel is a light panel that has three colours to show you the quality of your air at home:

The AcerPure Cool has a 3-in-1 HEPA certified filter and Ag+ Silver Coated filter to remove PM1.0 particles, 99.97% of 0.3μm suspended particles, bacteria in the air. It works by releasing negative ions, decomposes harmful gases in the air too, like formaldehyde. There is also a PM1.0 Air Quality Sensor built in, where it can detect the indoor air quality in real time, and adjust the operation mode accordingly.

As for the fan itself, it can swivel up to 90-degrees and streams purified air up to 16m, thus achieving an air circulation of a 27m2 room in just three minutes.

I’d say that the AcerPure Cool has an interesting design that makes sense, but there’s definitely a lot more room for improvement. More on that later.

The AcerPure Cool is a pretty straightforward device to use. There’s no app to setup, just bring it out of the box, plug it in, and you’re ready to go. It does come with a simple remote control for you to control it if you’re a distance away from the fan. You can turn on/off the fan, the air purifying system, change swivel and rotation settings, and even set a timer for how long the fan should be running for.

That being said, I wished that the fan itself would have a magnetic spot for you to attach the remote control with. Because it’s so small, I can see how some people can misplace it. If you do misplace it, then you’d have no choice but to go to the fan and change settings. This is also where app and Wi-Fi connectivity would be a great feature to have.

The touch panel is responsive, but it can sometimes take a couple of presses to process your touch input. As for build quality, the AcerPure Cool feels solid. But when you try to move it around, you can hear small creaking noises inside the fan. When the fan is operating, you can also hear a very tiny ticking noise when the fan is rotating and swiveling.

The fan itself blows really strong winds, so there’s no complaints there. However, the 3-in-1 HEPA filter can use a better indication system. There’s only the indication light to show the air quality, however, it would’ve been better if there was an LED display to show the AQI in your home.

As for accuracy, testing it side by side with my current Xiaomi Mi Air Purifier Pro, the light indicator does change according to the colour status shown on the Mi Purifier Pro (which has a display), so I’m guessing it does work as intended. But, it takes much more time for the AcerPure Cool to purify the air.

If you don’t want the air circulator to work, the two features are independent. So, you can turn on the air purifier only without the air circulator, and vice versa. Take note that the higher the level of the purification level, the stronger the purifier fans will work. This fan is different from the air circulation fan. As for the Smart Mode, it will automatically adjust the purifier’s fan speed based on the indoor air quality of your home.

For regular dust, it does a great job at trapping them in the filter, but doesn’t work that well for cat fur. The cat fur in my home would just get trapped at the base of the AcerPure Cool. That being said, I still feel that the air in my home feels much easier to breathe after using the AcerPure Cool.

When it comes to maintaining the AcerPure Cool, there’s a small screwdriver on the bottom of the fan. Just unscrew it, twist the fan cover, and you’ll have access to clean the three fan blades within. However, this does require the need of an external tool. It would’ve been better if the fan cover could be unlocked with a clasp tool.

As for the 3-in-1 HEPA filter, replacing it is fairly easy. Just lay the AcerPure Cool flat on a surface, twist the base and pull out the old filter. Next, just place the new filter and lock back the base cover, and you’re good to go. According to Acer, the HEPA filter can last for about a year before a change is needed.

The AcerPure Cool is a good first product for the company’s subsidiary. It features a practical design of combining an air purifier with an air circulator. This is something even the more popular Xiaomi purifiers couldn’t do. Some users had to even buy 3D printed mods to attach to the top of their purifiers to get clean air blown to them, and that’s just in a single direction.

But with the AcerPure Cool, you don’t need to worry about all that, because cool and clean air would already be blown into your living space. For the price of RM1,299, the AcerPure Cool is a great product if you’re in the market for a HEPA-enabled air purifier. But, if you do have an air purifier at home and are looking for an upgrade, maybe you should wait for the AcerPure Cool 2 instead.

Now for the best part. In conjunction with the arrival of acerpure cool, Acer Malaysia is holding an exclusive launch promotion on Lazada on 5 February 2021. During the promotion, acerpure cool is available at RM899 with a HEPA filter worth RM199 for future replacement thrown in for free. Thereafter, acerpure cool launch promotion of RM999 with an extra HEPA filter worth RM199 will be available at the select Acer official online stores and Acer concept stores from 6 until 9 February 2021.

Starting from 10 February until 31 March 2021, with purchase of any Acer laptop or desktop in the select Acer official online stores and Acer concept stores will be entitled a special offer to purchase acerpure cool at RM999 with an extra HEPA filter for future replacement.

In this article:Acer, Air Purifier, Fan