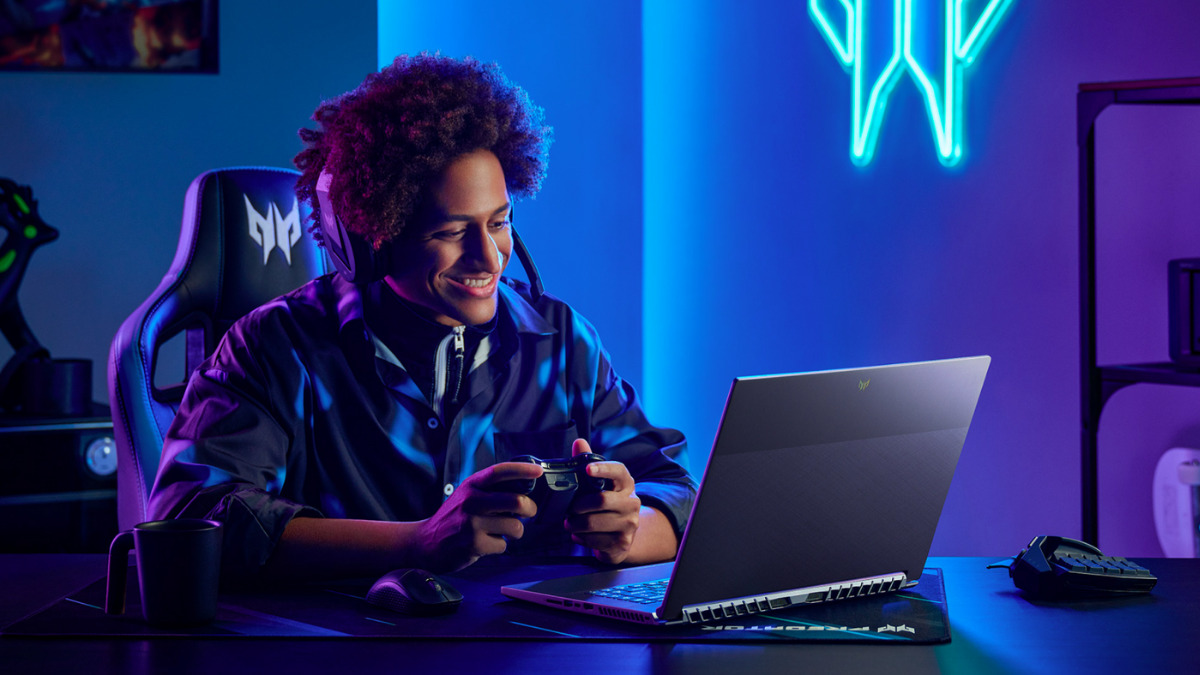 Combining up to 11th Gen Intel® Core™ i9 processor with up to NVIDIA GeForce RTX 3080, the Predator  Triton 500 SE packs best-in-class components in understated, discreetly designed chassis. In its sleek ‘incognito’ design, the Predator Triton 500 SE combines mobility and power to make it an ideal device with  a professional look for work while allowing the professionals to enjoy gaming in their free time. With up to  32GB DDR4 RAM and 1TB of high speed PCIe Gen4 SSD, it has plenty of space for games, footages and  complex spreadsheets.

Powered by NVIDIA GeForce RTX 3080 and up to 11th Gen Intel® Core™ i9-11980HK processor, Predator  Helios 500 gaming laptop offers player more than enough horsepower to handle all the latest triple-A  gaming titles. With up to 64GB DDR4 RAM and up to dual 1TB PCIe NVMe Gen 4 SSD storage in RAID0  configuration, Predator Helios 500 offers hardcore gamers plenty of space for the next generation of  games.

The display panel of the 17-inch Predator Helios 500 comes with two configurations:

To keep the machine running optimally, Predator Helios 500 has Predator PowerGem™, the custom engineered technology made from a metal-alloy polymer, on top of the CPU. Plus, Acer’s Vortex Flow  technology leverages two fans, including a 5th generation AeroBlade™ 3D fan, to redirect airflow to critical  components and boost performance.

Living up to its gaming DNA,the WASD keys on Predator Helios 500 can be swapped for Acer’s Racing keys  or MagForce keys, which feature MagTek mechanical switches to make keystrokes function like a  controller’s joystick. This gives players precise control over their avatar’s movement. Through  PredatorSense™, gamers are also able to customize light bars under Predator Pulsar lighting and  personalize the per-key RGB backlit keyboard.

Predator Helios 500 is priced from RM13,999 and pre-orders begin on 30 October 2021 at Acer estore,  Acer Flagship Store on Shopee and Authorized Predator Partners.

The popular Predator Helios 300 is now refreshed with up to 11th Gen Intel® Core™ i9 processor and up to  NVIDIA GeForce RTX 3070 graphics to enable all the performance gamers need to unleash the talent that  lies within. With the option of 15.6-inch or 17.3-inch display, both have the option of 165Hz QHD IPS  display with 100% DCI-P3 color gamut or 360Hz FHD IPS display with 100% sRGB color gamut to best suit gamers’ needs.

Meanwhile, any purchase of Predator Triton 500 SE or Predator Helios 500 from 30 October 2021 until 6  November 2021 will be entitled to all free gifts mentioned above total worth more than RM2,000.

Designed with gamers who look for top-of-the line technology in mind, both the Predator XB323QK NV  and Nitro XV282K KV gaming monitors are equipped with the latest HDMI 2.1 ports that enable to deliver  visuals in 4K UHD 3840 x 2160 resolution at 144 Hz refresh rate for heightened gaming experience.

In addition, the PD65W USB Type-C port provides display, data transfer and charging all at the same time  over a single cable. Both monitors can also work as KVM (Keyboard, Visual, Mouse) switches, enabling easy  switching between desktop and laptop without having to swap to an additional set of keyboard, mouse  and monitor.

Available immediately Acer estore, Acer official online stores on Shopee and Lazada as well as Authorized  Predator Partners, the Acer Nitro XV282K KV gaming monitor is priced at RM3,299. Any purchase before  6 October 2021 will be entitled to a free Predator Aethon 300 keyboard and Predator Cestus 310 mouse total worth RM589.

The Predator Tribe is created for gamers who are enthusiastic about gaming, whether professionals or those who simply have a love and passion for gaming. The pioneers of the Predator Tribe are known as Predator Tribal Guardians and are no strangers to the Malaysian gaming community – Ai Gaming, ChuChu Gaming, MasterRamen and Spartanker.

In the run-up to the launch of Predator Tribe, Predator Malaysia collaborated with local artist Vince Low to release the first collection of cool and stylish merchandise with the Predator Tribal Guardians. These limited-edition merchandises come in 4 designs representing each of Guardians. They are priced at RM400 and will be available at the Acer Malaysia’s Estore and official online store on Shopee from 30 October 2021.

“Predator’s goal is to provide opportunities for gamers to showcase their talent that lies within them, no matter who or where they are. We want to partner them to grow the gaming ecosystem and community,” Johnson Seet, Director of Consumer Business, Product and Marketing, Acer Malaysia.

Advertisement. Scroll to continue reading.
In this article:Acer, Gaming