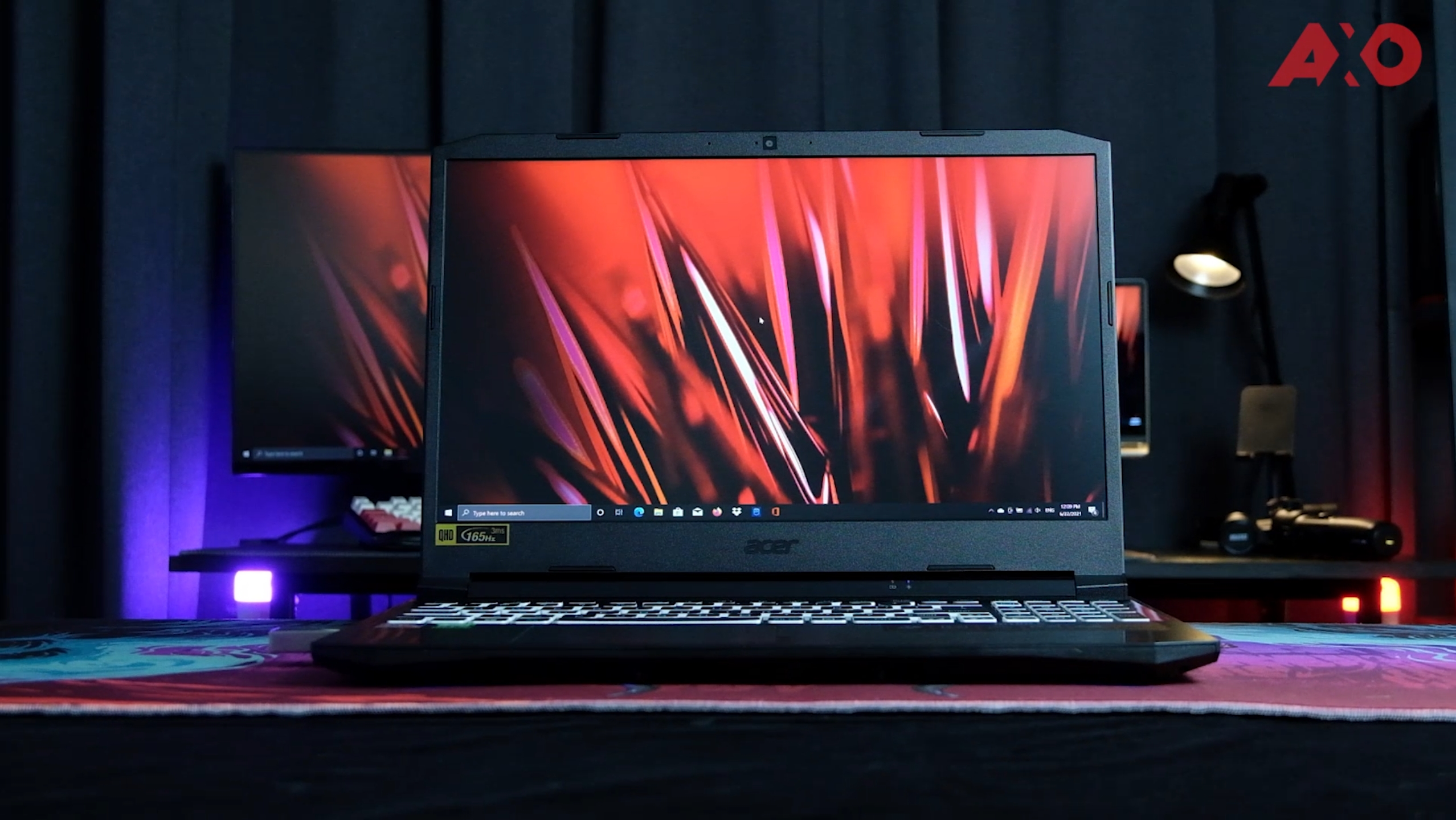 This right here, is the Acer Nitro 5. To your eyes, this may just look like another gaming laptop, but what you don’t know is that it is powered by the latest AMD Ryzen™ 7 5800H mobile processor, with graphics handled by NVIDIA® GeForce® RTX 3070. These are top of the line specs in such a compact body, who could say no to a review opportunity? Before we get into the nitty gritty, let’s go through the Acer Nitro 5’s spec sheet.

The Acer Nitro 5 weighs 2.2KG, and measures 2.39cm thick. It bears the familiar Nitro-esque gaming aesthetics we’ve grown to know and love. We’ve got the edgy angles on the sides, with the dual rear vents looking like a sports car’s aggressive taillights. There are some more ventilation outlets on both the left and right sides of the laptop, with the Nitro branding printed in the top middle of the hinge area. Despite its mostly plastic finishing, the laptop still has a sense of minimalism, and class to it with a couple of red accents.

Connectivity wise, the laptop has a HDMI port, a USB 3.2 Type-A Gen 2 port, a USB Type-C 3.2 port, two USB 3.2 Type-A Gen 2 ports, a minimized RJ45 Ethernet port, as well as a 3.5mm audio jack combo. There’s also a Kensington Lock to secure the laptop, but unfortunately, no SD/microSD card reader can be found. Round the back, in between the taillight vents, is the power port to supply all the juice the laptop needs from the charging brick, which this time round, is big, but thin.

Display wise, the Acer Nitro 5 features a 15.6-inch IPS display that is complete with a 165Hz high refresh rate. To make the visual experience even snappier, it has a 3ms response rate. Acer managed to push the screen-to-body ratio to 80%, giving off a more immersive experience be it from gaming or watching movies. The display itself has a matte finish, and it’s great at avoiding reflections and unwanted glare. It’s sturdy, has very little wobble, but it does have a some flex to it. Just don’t go flexing the screen for no reason, and you’ll be fine.

The display has just the right amount of brightness, and the colours are fairly vivid. Blacks can be darker, but just for that 165Hz refresh rate, I’m already giving the laptop a lot of bonus points. There’s even a FHD version which has 360Hz refresh rate, now that’s insane.

When I first unboxed the laptop, I was expecting it to be heavier, but that wasn’t the case with the Nitro 5. On paper, it does say 2.2KG, but it certainly didn’t feel 2.2. The casing material somewhat irked me because it’s very prominent to fingerprint smudges. So, if you’re bringing the laptop along with you, you might want to keep a microfiber cloth ready too.

As for the connectivity ports, I like the positioning of them. The power port is placed on the back, so there’s nothing jutting out from the side of the laptop. And most of the USB Type-A port is placed on the left side of the laptop, which frees up more space your mouse hand on the right. Personally, I kind of wished that the USB Type-A port on the right would’ve been swapped out with another USB Type-C port as I have transitioned more to USB-C devices recently. Also, I would’ve liked to see a card reader on the Nitro 5 series, and the USB-C port supporting charging. That would’ve made it easier to retrieve content for when I’m doing production work, and for me to charge my devices.

The Acer Nitro 5 uses a dual-fan system with a quad ventilation exhaust design. Paired with CoolBoost and NitroSense, hot air is channeled out from the left, right, and rear of the laptop. Fan profiles can easily be toggled with NitroSense, and surprisingly, my right hand could not feel any of the heat being dissipated form the right vent, and that’s a plus.

As for the keyboard typing and trackpad navigation experience, the Acer Nitro 5 wins half the battle here. The keyboard has great isolation and key travel distance, which makes for a comfortable typing experience. There was a nice tactility to it, and I enjoyed typing on the keyboard. That being said, I was let down by the 4-zone RGB as I would’ve preferred an all-zone, per-key RGB setup. The WASD and arrow keys are also highlighted, which is a nice touch, and the key sizes aren’t squished and crammed together. There’s even a numpad on the right, with a dedicated NitroSense key, and media keys embedded into the FN row on the top.

For the trackpad, it’s large enough in size, but it’s not as smooth as I’d expect it to be. There are no physical buttons for left/right click on the bottom, and I wish it was placed in the center rather than positioned on the left. That’s because when I’m gaming or typing, my palms would get onto the trackpad. There are rare chances of mistouch, so I’d prefer to just have it in the middle.

Powered by the latest AMD Ryzen™ 7 5800H mobile processor with Radeon™ Graphics, we had no doubts about the laptop’s performance, be it for productivity or for gaming. In the performance department, we ran a couple of synthetic benchmarks with the Acer Nitro 5, and the AMD Ryzen 7 5800H was able to handle all that we threw at it with ease, while the Nvidia GeForce RTX3070 GPU handled the graphics side of things like butter. Obviously, for work, the laptop didn’t encounter any issues like lag, or screen freezes. We used Opera GX browser, and everything loaded fast and smooth, which is also thanks to the Killer Wi-Fi 6 module.

When it comes to gaming, we tried Genshin Impact at the highest settings on the Acer Nitro 5, as that is my currently most played game. The laptop and the RTX 3070 did very well in handling the graphics, but you can hear the fans kick things up a notch. As for thermals, the palm rest area stayed cool, with most of the heat being generated in the central top area of the keyboard, away from my hands.

Here are some of the benchmarks we ran on the Acer Nitro 5:

In the audio department, the Acer Nitro 5 is fitted with a dual stereo speaker system, which are downward firing, leaning towards the front of the laptop facing you. The speakers sound average, with good highs, and mids, and an acceptable amount of bass. It does get pretty loud, but just keep things at 80% so you don’t hear any distortion.

The webcam is placed on the top of the display, flanked by microphones. They perform decently, and are sufficient for voice and video calls meetings.

The Acer Nitro 5 still only has a 58Wh battery in it, and that’s because the rest of the space is occupied by the 2.5-inch storage bay. Personally, I would’ve wished for a larger batter capacity, and forego the storage bay. Using the laptop for work and very minimal play, it does last almost the entire day, giving about 9 hours of usage with screen brightness at 50%. Charging the battery from zero to full takes about 2 hours, and unfortunately, USB-C charging is not present on the Nitro 5, so you’ll have to bring the 180W charging brick with you.

The Acer Nitro 5 series has been a popular choice for gamers on a budget, and with it now offering AMD Ryzen 5000 performance and Nvidia RTX graphics prowess, it’s offering even more value with the price to performance ratio. The Nitro 5’s design got cleaned up over time, with the thermals updated, and most importantly its performance offerings. However, it still is the Nitro 5 with budget roots, so it’s still made of plastic and lacks some of the features found on higher-end laptops. For that, you’ll need to jump a tier to the Predator series.

For the price you’re paying, the Nitro 5 offers amazing value in terms of sheer performance, and aesthetics to make it a complete gaming laptop package. Not to mention that it stays cool and quiet, even when you’re hardcore gaming with it.

In this article:Acer, Gaming, laptop