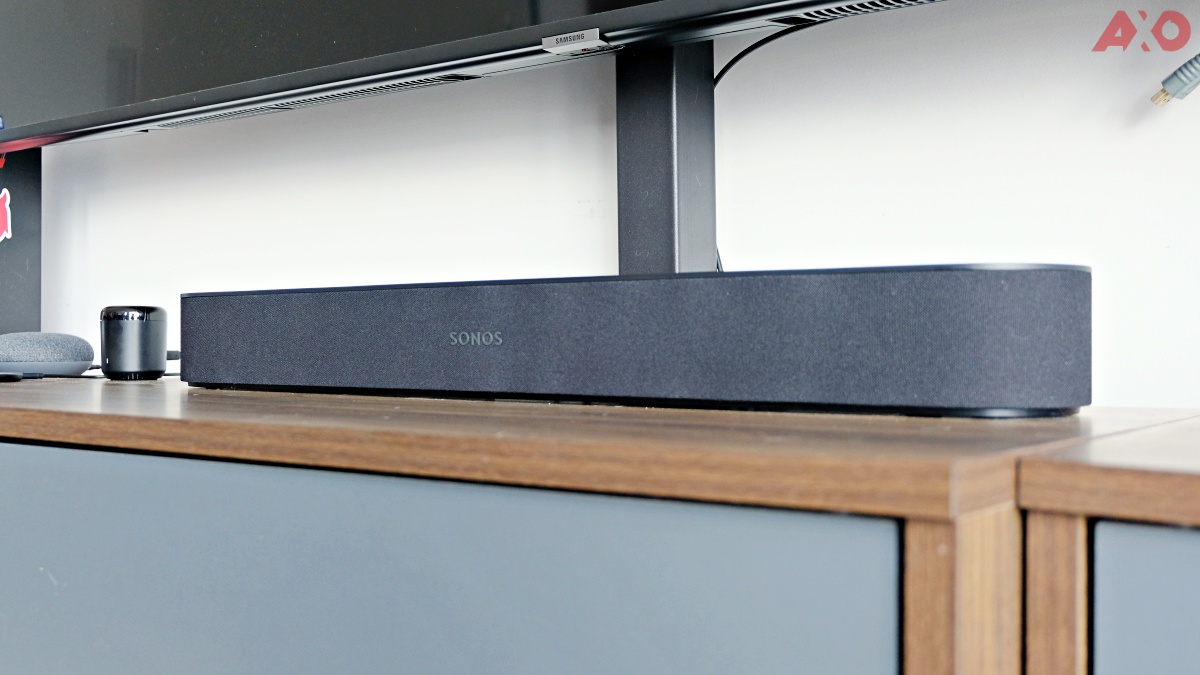 The Sonos Beam was the other speaker we paired with our Sonos One, and it acts as the sole home theater system in our living room. We got the chance to review it, and we must say, it’s capable of more than enough power for the entire living room as compared to other entry-level soundbars with dedicated subwoofers.

The Sonos Beam is part of the company’s home theater audio range, introduced alongside the Sonos Arc, PlayBar, and the PlayBase. There’s also the Sonos Sub that adds a whole lot more thump to your music, but let’s not get into that for now. The Sonos Beam is somewhat the entry-level soundbar of the lineup, and its size is the best thing about it. It sits very nicely under a 49-inch TV, as well as a 65-inch. It’s smaller than the Sonos PlayBar, and has the addition of HDMI connectivity, which is great for TVs.

Taking cues from the Sonos One, it has a touch-sensitive panel that shares similar touch features. There’s a mute button on the top, and left and right halves lets you control the volume. Swiping left and right changes your music playlists, and the center lets you play/pause your music. It’s the simplicity of Sonos’ speaker that’s a real beauty, and it translates to all of their speakers too. Since there is no remote control for the Sonos Beam, you’ll be controlling the speaker via the Sonos app, the touch controls, and voice.

Supporting both Amazon Alexa and Google Assistant, the Sonos Beam gets a massive feature upgrade because it can also act as a smart home hub, on top of your usual daily voice commands. Just like the Sonos One, the built-in voice assistants aren’t available in Malaysia as of yet, but there is a workaround for this right here.

On the front, the Sonos Beam is wrapped with a fabric, while the top is covered with a metal plate. On the back, there’s the ethernet port, a HDMI port, power port, and a Wi-Fi button. It can be placed right under the TV, or mounted directly onto a wall.

The Sonos Beam features four full-range drivers, a center tweeter, and three passive radiators (for adding bass). It is designed to have three channels, but when you listen to it, it sounds almost like a real surround-sound speaker, all from just one soundbar. This is made possible with Trueplay, the company’s feature that calibrates the audio to fit the room it’s placed in.

Do note that the TruePlay feature is only available on iOS for now.

With the Sonos Beam’ support for HDMI ARC, setup was relatively easy. All we had to do was connect it to our TV with a HDMI cable, and using an Ethernet cable to connect it to the router. We fired up the Sonos app, and started the pairing process by discovering the speakers, connecting them to WiFi by pressing the WiFi button on the back, and it was done.

Using the HDMI ARC port, the speakers can easily be controlled via your TV remote as well. In our case, we had a 65-inch Samsung TV and it supported the HDMI ARC feature, so controlling the speakers were easy, removing the need for an additional Sonos remote control.

If your TV doesn’t support HDMI ARC, you can either connect it via Bluetooth or using the Optical Adaptor that’s provided in the box. Just plug the adaptor to the accompany HDMI cable, and you’re good to go. However, to make it work properly, you’ll need to tweak the settings a little in the Sonos App and TV settings.

The Sonos Beam worked really with the Sonos app, and it gives a lot of functions on top of the 100+ music streaming services. With Night Sound, it takes out all the bass, so that you can watch your movies when your other family members are asleep. Speech Enhancement improves the speech clarity, so you never miss any dialogues. We have Speech Enhancement turned on the entire time, and Night Mode is only turned on after 10PM.

The Sonos app also lets you adjust the EQ, with sliders to tweak the bass and treble, as well as the loudness. You can also change the TV Dialog settings, so that the audio syncs properly with the visuals that are displayed on your TV.

With support for voice assistant, you can control the speakers with your voice. For example, you can change the music, raise/lower the volumes, turn the TV on/off etc, but that’s about it. It can actually control the TV as well, but you’d need compatible Amazon hardware to do so, since it’s Amazon-based, like the Amazon Fire TV or Fire TV Stick.

We’ve only tested the Sonos Beam in our home, with TruePlay configured. We’ve tried to play music, videos, as well as Netflix shows and movies. What we heard was rich and realistic sound in each scene. Dialogues were ultra clear, and the booms from explosions were accompanied with a really loud and defined thump.

Pairing it with one Sonos One behind us, it added to the surround sound effect despite it just being one speaker at the rear.

When it comes to playing music, what we hear are crystal clear trebles, with lower mids that provide crisp speeches. Despite not having a dedicated subwoofer, the Sonos Beam was capable of delivering great bass levels on its own. We tuned the Beam to have +10 Bass and +5 Treble, and it performed excellently on Mura Masa’s “Lotus Eater”. The volume can go really loud, and the audio doesn’t distort at all. But, you might want to tone it down in case the neighbors file a “noise” complaint against you.

Priced at RM2,399, the Sonos Beam may come off a little pricey to some. But, if you’re looking for an all-in-one soundbar that does it all, and delivers great audio, the Beam should be in your list of consideration. Also, the HDMI ARC is a great connectivity solution, provided you have a TV that can support the output.

With the Sonos App, and the possibility of wireless of audio expansion, the Sonos Beam gets an advantage over other similarly priced competing soundbar/home theater systems in the market. If you want more stereo separation, you can always add a couple more Sonos Ones. If you want more bass, there’s always the Sonos Sub for you to consider. The possibility is endless, and it’s not just limited to the living room. You can always add to the Sonos ecosystem, whenever your budget allows.

Sonos has debuted Sonos Ray, a compact soundbar with impressive sound for smaller spaces and as with all Sonos products, the brand’s newest speakers... 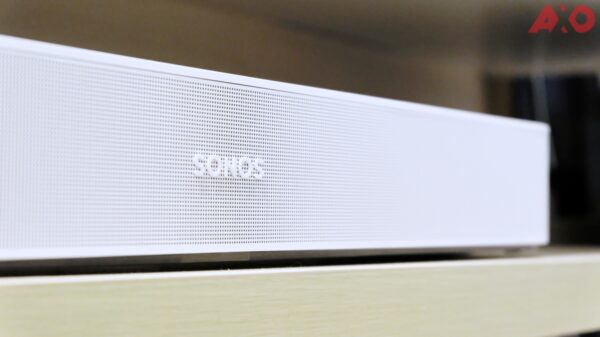 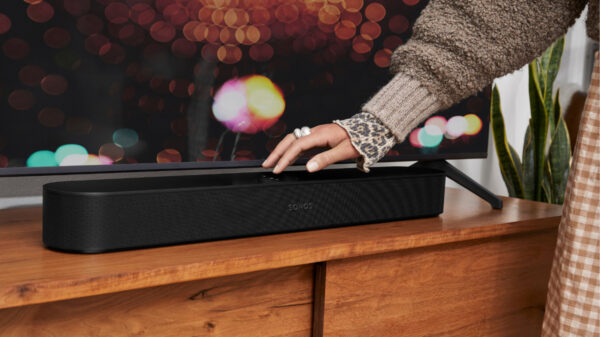 Sonos Beam (Gen 2), a new version of its industry-leading compact smart soundbar for TV, music, gaming and more is unveiled. The new Beam... 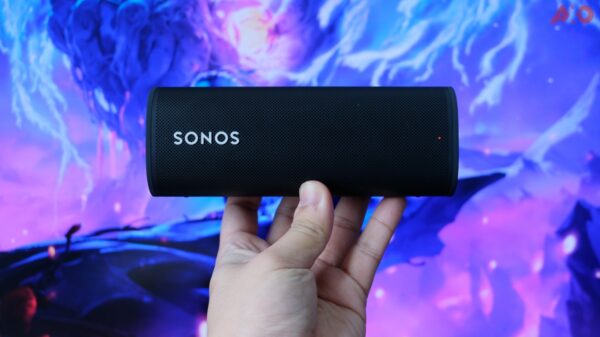 The Sonos Roam is the multi-room titans’ latest ultraportable smart speaker that aims to be the life of the party. From our testing, the... 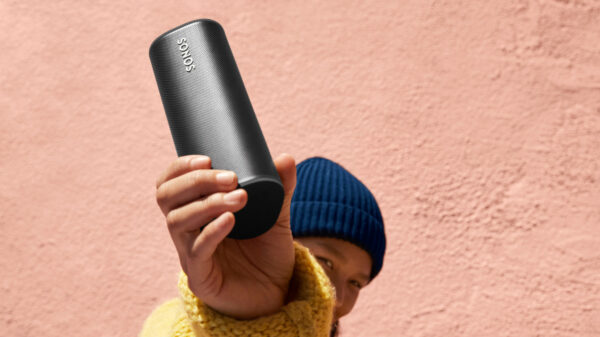 Sonos today unveiled the Sonos Roam, which is the company’s most ultra-portable smart speaker that seems to be the most versatile, and made for... 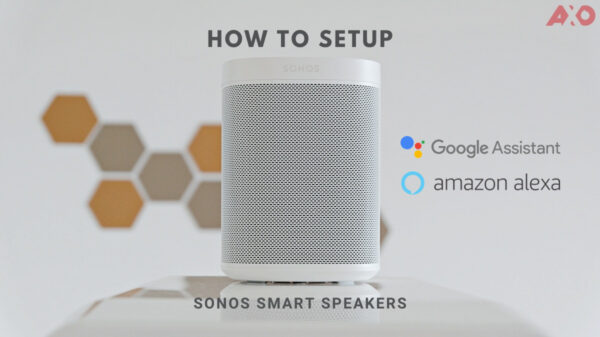 Sonos smart speakers do have voice assistants like Google Assistant and Amazon Alexa built right in. But if you’re like me, who has a... 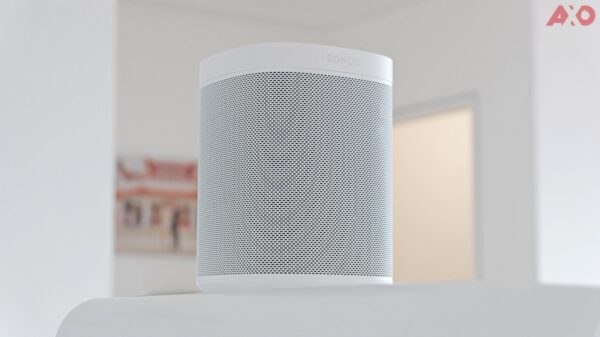 The Sonos One smart speaker has been on my radar for quite a while now, and I’m glad I finally got to review one....