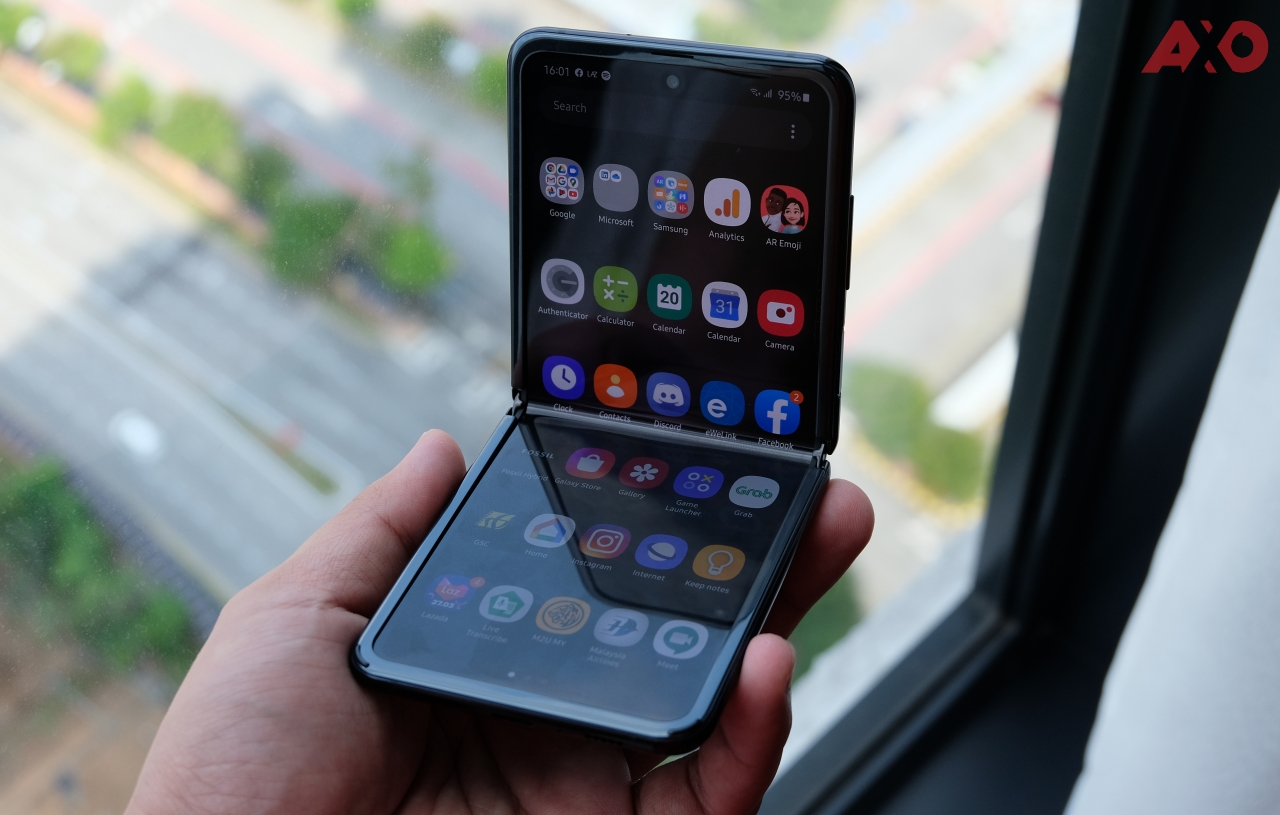 Samsung made the Galaxy Z Flip with an aluminium frame, a plastic front, with a glass back. When it’s closed, the phone feels great to hold and can fit in any pocket without taking too much space at all. However, the glass back is extremely slippery. So much so, that after some time the phone would just slip off my mousepad and fall to the ground. There is no chip damage from the fall, but really? It’s that slippery? That being said, you can remedy this by sacrificing the phone’s aesthetics and putting a casing on it. That would definitely give the phone the extra grip it needs.

Many of you are wondering, is there a crease line? Unfortunately, there is still a crease line in the middle of the display, but it is only visible when there’s light reflecting off the screen. When you’re in games or watching a video, you barely even notice it. But if you’re scrolling around the middle part of the screen, you can definitely feel it.

The Samsung Galaxy Z Flip has a freestop folding system, where the rigid hinge would allow users to unfold the phone and leave it any angle. You can prop it up at 90-degrees to take a selfie, 130-degrees to take a video call standing up, or just open it all the way and use it as you would with a normal smartphone. The hinge feels firm and secure because every time you open or close the device, there’s a mild restrictive force to it followed by a reassuring thud when it closes.

The Samsung Galaxy Z Flip’s button placements are quite natural to the palm. Power button is placed where the average right thumb would be rested on the right side of the device, while the volume buttons are placed right above it. If you’re left handed, you might want to use your left index finger for fingerprint unlock the phone instead.

Samsung made the Galaxy Z Flip’s screen with its proprietary ultra thin glass (SUTG), protected by a soft, scratchable plastic layer on top. The phone does open fully flat, but when you close it, there is a minimal tiny gap in the middle of the phone.

The crease line aside, the Samsung Galaxy Z Flip’s display is great to look at. Its 6.7-inch foldable dynamic AMOLED screen has a Full HD+ resolution (1080 x 2636), complete with HDR10+ support. Gaming and watching movies on this device is an absolute pleasure. Because of how narrow the phone’s screen is, it has a rather cinematic aspect ratio to it, and that truly adds on the video watching experience.

On the outside, you’d find a second display, called the Cover Display which is 1.1-inch in size. It is a Super AMOLED display with 112 x 300 pixels. You can’t watch videos on this display, but you can in fact, use it as a viewfinder for selfies when the phone is closed. When the phone is closed, just double tap on the power button, and the cover display turns into a viewfinder for you to take selfies by clicking on the volume down button. Also, you can even tap on the display to switch between the main and wide-angle sensor. It is worth mentioning that selfies taken while the phone is closed will be square (1:1 aspect ratio).

The main display’s colour reproduction looks great with great blacks and no light bleeding off the edges. The phone is bright enough, but the ambient light sensor can sometimes get quite aggressive. In the dark, the display can go too dark till I need to turn the brightness up a bit.

While the Samsung Galaxy Z Flip is closed, you can already do quite a bit to interact with the phone. Other than taking selfies, the Cover Display also displays notifications. You can double tap on it to see the time and date, swipe left to see notifications, and swipe right for music controls if you have music playing. It is worth mentioning that the notifications don’t show a preview of what it is about. It just shows you which app the notification is from, and that’s it. I think it’s a great feature but I’ll get more into that later.

While the novelty of having a foldable smartphone like the Galaxy Z Flip is amazing, I must say there is no “cool” way to open the smartphone with one hand. Most of the time, I find myself just using two hands to unfold the phone, and that in itself is already pretty cool looking.

Transferring my data from the Samsung Galaxy S20 Ultra 5G, the experience is extremely smooth. Samsung uses its own app called Smart Switch. Just by turning the app on on both phones, it immediately discovered each other and prompted me on what to transfer over. Once I’ve selected what I need, it took less than 5 minutes to transfer all my data and settings over. It’s like I never left the S20 Ultra, and that is a real Samsung ecosystem experience.

Personally, I love tall and narrow phones. There’s more to look at, and I’d be scrolling less because I get to see more content from the top to bottom. The Samsung Galaxy Z Flip’s narrow screen makes it excel when it comes to one-hand usability. My thumb can easily reach the other end of the screen, and it is a cinch to swipe typing.

As per the title of my review, I call the Galaxy Z Flip the social distancing phone because of its folding capability. Most smartphones are just a flat surface, with one scan of your fingerprint, you’re in. But because the Galaxy Z Flip has that extra folding step, you’re more inclined to not check your phone that often. You’re only limited to the notifications on the Cover Display, which don’t even give you any preview of what the notifications are. I found myself more connected with real life, and more disconnected with my life online. It gave me a good balance of smartphone usage, and spending time doing things I like away from online media.

The Galaxy Z Flip is powered by the Qualcomm Snapdragon 855+ processor, paired with 8GB of RAM and 256GB of storage. This combination alone makes operation and navigating through the phone fast and smooth. Apps are snappy to launch, and load times are fast.

Unlike its only other competitor the Motorola Z, the Galaxy Z Flip has top of the line specs. Just because it is a foldable smartphone, it doesn’t sacrifice anything when it comes to performance. And that is a great deal of engineering on Samsung’s part, to pack such hardware prowess into such a thin device.

Because of how wide the screen is, I’m thinking games like Marvel Super War and AOV hasn’t been optimised for the Galaxy Z Flip yet. These games don’t seem to scale properly with the aspect ratio of the phone. When it comes to the display, the top and bottom sections seems fine, but the left and right edges are cropped and certain game elements appear to overlay into the edges. In MOBA games, the controls are way too skewed towards the center of the phone, making it rather difficult to control.

Overall, gaming on the Galaxy Z Flip is still fun there isn’t any performance issue when it comes to gaming. Graphics look great with amazing detail. There’s very little screen tearing or jagged scenes when I game, and if you’re feeling a little cheeky, you can even play games with the display half closed.

Of course, there is a little heat when you’re gaming, but only on the hand that is holding the top part of the hand. It’s not scalding hot, so it’s not that big of a deal breaker. The heat dissipates as fast as it comes too.

The Samsung Galaxy Z Flip has only one speaker on the bottom which is downward firing. They may be loud, but audio quality isn’t the best. There’s practically no bass at all, with mediocre mids, and excessive highs. Dialogues can be rather sharp to the ear, and EDM just doesn’t sound that good on the Z Flip. Apart from that, normal media consumption is acceptable on the Galaxy Z Flip.

The Samsung Galaxy Z Flip is equipped with a dual camera system that consists of a 12MP wide angle sensor, and a 12MP ultra wide-angle sensor. These are paired with Dual Pixel PDAF for speedy auto focusing, and OIS for stabilised night shots and videos. Focusing is fast, but there is this weird delay when it comes to panning during videos. As for night shots, pictures can be pretty noisy with little detail.

Apart from that, picture quality from the Galaxy Z Flip during the day is great. Photos are vivid with colours that pop, and it manages to capture good details even if it only has a 12MP camera.

There’s also a flex mode that lets you split the display into two halves when you’re taking a photo, so you can prop it up on a table or flat surface.

The 10MP selfie camera performs alright when it comes to selfie. But, you always have the option to close the phone and switch to the main 12MP sensor for higher resolution selfies.

I did this same routine to test out the Samsung Galaxy S20 Ultra 5G, because we were stuck at home during the MCO period. I tested this routine with two methods, one on Wi-Fi only and one on mobile data only.

Here’s what my daily routine looks like in MCO:

Because the Galaxy Z Flip has a thin body, Samsung could only fit in a 3,300mAh battery. My test above is based on continuous usage. Considering you don’t open your phone often to surf social media or watch videos, it should give you more than enough juice to last you till bedtime.

Priced at RM5,888, the Samsung Galaxy Z Flip can be a little pricey. There isn’t 5G connectivity so it isn’t very future proof for when 5G arrives. But, you do get the “cool factor” of a folding smartphone and great smartphone performance.

If you’re in the market for a smartphone, and you’re bored of the traditional smartphone design, the Samsung Galaxy Z Flip will be a great upgrade for you. It retains everything a smartphone is, and adds on subtle additional features you never thought you’d appreciate from a smartphone.