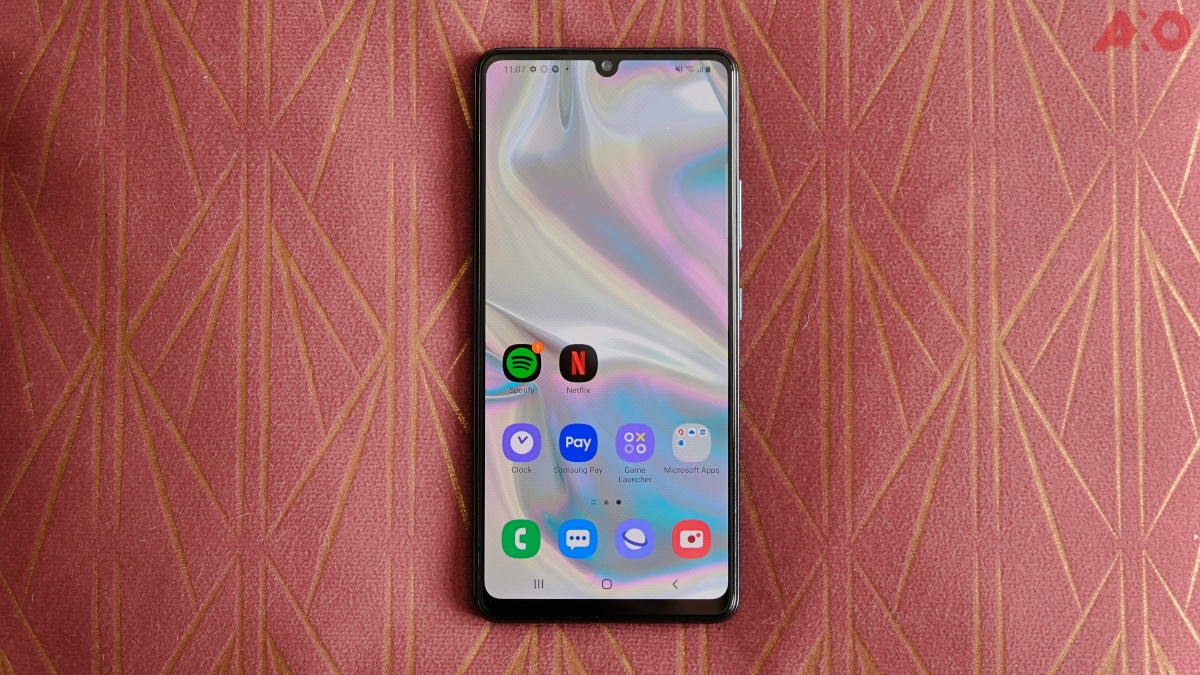 The Samsung Galaxy A42 5G is touted as the company’s most affordable 5G smartphone, and the addition of 5G connectivity will be great for the mass consumer to get into 5G when it finally becomes available in the country. But apart from that, does it offer anything else? Is it a good smartphone for day to day use? Or even for gaming? Let’s find out.

The Samsung Galaxy A42 5G may look like any other smartphone from the front, but once you see the Prism Dot Black case on the back, it’s interesting, to say the least. The back is segmented into four zones, with each segment featuring a different shade of black, covered in these tiny little dots. This glossy back is definitely different from what we’ve seen so far, and adds a classy, sophisticated touch to the device.

Apart from that, the device is narrow, but tall, and is exceptionally comfortable in the hands. I, for one, don’t like phones that are too wide, so the Galaxy A42 is perfect for my hands. It’s both lightweight and it fits very nicely in the pocket and bag too.

On the left, there’s the triple card slot which can accommodate two SIM cards, and a microSD card. On the right, there’s volume and power button, while the speaker grille, USB Type-C port, and 3.5mm audio jack are placed on the bottom. The audio jack is a welcome addition, especially to those who still prefer using wired headphones/earphones.

The Samsung Galaxy A42 5G has a 6.6-inch Super AMOLED panel which is great, but it only outputs a 720p resolution. That’s not a dealbreaker of course, and it’s probably the company’s way of keeping a 5G device affordable.

The screen is fairly large and because it has a 20:9 aspect ratio, it plays movies and shows adequately with minimal black bars on the top and bottom. Quality wise, it displays very vivid and bright visuals, despite having only a 720p screen. You can’t really notice the difference, unless you start doing an in-depth comparison with a 1080p screen.

Despite not having a 90Hz or 120Hz refresh rate screen, the display is still a real treat to view content on because of the Super AMOLED’s visual prowess.

The Samsung Galaxy A42 5G is a great lightweight device, that checks a lot of boxes on what a smartphone should have. It has a nice streamlined design that’s both functional and aesthetic.

It’s also nice that the fingerprint sensor is embedded under the display, and not side-mounted into the power button. This makes more sense as the thumb would rest on the screen more than it does on the side.

There’s really not much to complain about the device, when used on a day to day basis. The connectivity ports are all adequately placed, and are well within my thumbs reach. The camera bump is also pretty thin, so when your device is laid flat on a surface, the wobble is minimal, which is great.

When it comes to performance, the Samsung Galaxy A42 5G handles apps and games like a champ. There have been no screen lag or stutters in my experience, and the navigation is fluid and smooth. Even switching between apps, the process is fast as well. For its price, it definitely offers commendable performance.

For gaming, there’s the Game Booster mode that assists with helping games running smoothly. However, when we tried the device with Genshin Impact, it couldn’t push the graphics to the maximum, so we could only stick to “Medium” settings to make it playable smoothly. Also, the device got mildly warm after long hours of gaming.

Here are some of the synthetic benchmarks we ran on the Samsung Galaxy A42 5G:

The Samsung Galaxy A42 5G has a quad camera system on the back, which consists of a 48MP (F1.8) main sensor, an 8MP ultra-wide (123-degrees) angle sensor, a 5MP macro sensor, and a 5MP depth sensor. The 48MP sensor takes great detailed pictures, but the exposure compensation is a little poor. The ultra-wide and macro sensor works remarkably and can take really good ultra-wide and close-up shots.

When it comes to the UI, it’s simple and easy to understand. It also has the Single Take feature that lets you capture multiple photo and videos with just one click. The image preview is fast, but the shutter button does have a short delay before the image is captured. There’s also a delay when switching from standard angle to the ultra-wide angle, as well as when you tap on the image you just captured.

And for the front camera, Samsung even included a 20MP sensor for selfies and video calls. It takes bright selfies with minimal beautification, as well as decent video for video calls. You can increase the beautification level if you want, but we kept it lower as we wanted selfies to look more natural.

Here are some of the photo samples we took with the Samsung Galaxy A42 5G:

The Samsung Galaxy A42 5G has a single speaker system, and it sounds… decent. There’s only one speaker on the bottom, and it can go really loud. But, the treble tends to be too high, resulting in some crackling. There is also some audible distortion at loud volumes.

The mids are alright, which makes it good for dialogues and speeches, but for the lows, don’t expect any thumping bass from this (probably due to the phone’s thin form factor).

And if you still prefer using wired earphones/headphones, the Samsung Galaxy A42 5G still has a 3.5mm audio jack, which is something not seen on flagship models these days.

The 5,000mAh battery on the Samsung Galaxy A42 5G is quite the marathoner. I could get up to one and a half day’s of casual use with one full charge. Even if I head out and used the GPS and mobile data, it could still last me the entire day with approximately 25% battery left at 9pm.

Thanks to the Adaptive 15W fast charging, juicing the device back up to 100% took about 1 hour 46 minutes, which is even faster than charging the iPhone 12 Pro Max.

The Samsung Galaxy A42 5G is a great smartphone to get into the 5G bandwagon. Although it isn’t readily available yet, we weren’t able to do any testing for the 5G network. But, it will be good futureproofing for when 5G is ready for deployment in the country.

Apart from just having 5G, the device proves to be a great daily driver if your daily tasks include checking emails, taking photos for social media, and some light gaming. The entry price of RM1,599 isn’t too expensive, and should be considered if you’re thinking of getting a new smartphone for the era of 5G.