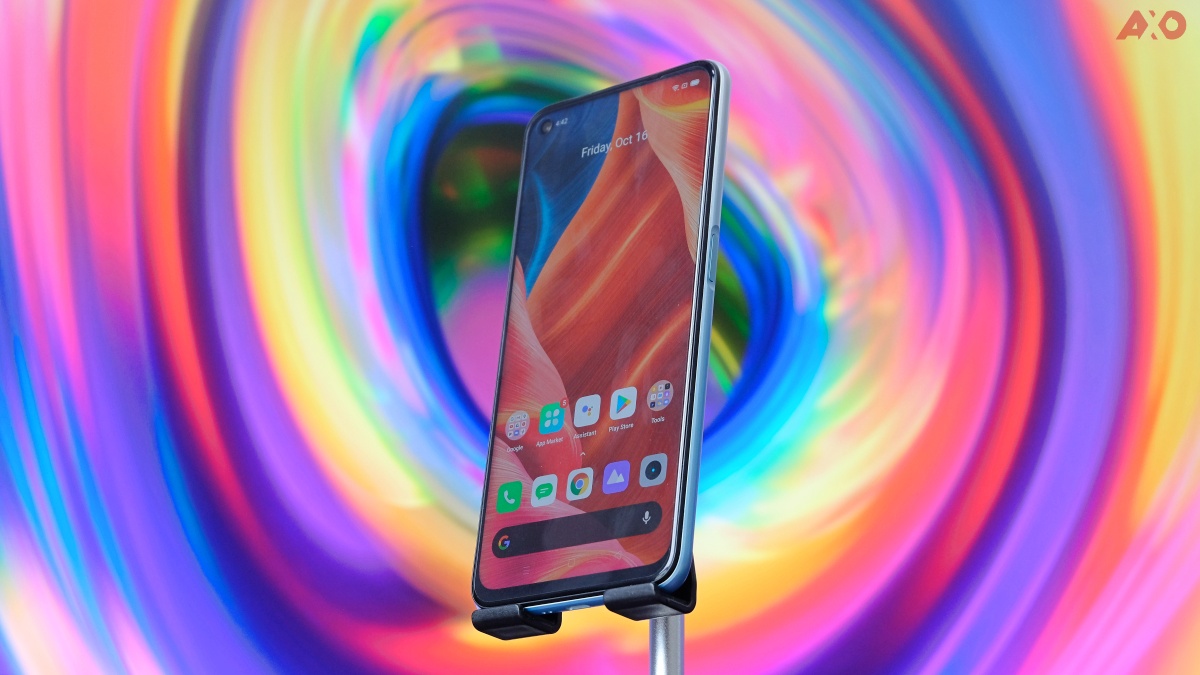 The realme narzo 20 Pro is finally upon us, and it is the first narzo series of devices for the Malaysian market. We got offered the chance to review it, so we couldn’t turn it down. Featuring the company’s staple MediaTek Helio G95 and large RAM offering of 8GB, is the narzo 20 Pro truly made for gaming? Will it be the king of mid-range gaming? Let’s find out.

The realme narzo 20 Pro has a standard looking candy bar shape design. There’s a keyhole notch on the front top right corner for the selfie sensor. On the left, you get the volume buttons, on the right, there’s the power button that has the fingerprint sensor mounted inside. And on the bottom, there’s the speaker grille, USB Type-C port, and the 3.5mm audio jack.

But what’s most interesting is the rear design. There’s a ‘V’ pattern that refracts light and changes hue and shows a little movement when the phone is angled differently. It kind of reminds us of the Honor 9X Pro, but way more subtle and classy. The ‘V’ isn’t as thick, and this strikes a nice balance between elegance and flamboyance.

realme smartphones are known to shift their volume buttons to the left side instead of it being on the right, on top of the power button like other Android smartphones usually do. If this is your first realme device, you might need a little while to get used to it.

The realme narzo 20 Pro has a 6.5-inch IPS LCD display that can output FHD+ resolutions. The panel is an LCD panel instead of an AMOLED panel, but there is a 90Hz refresh rate onboard. So, while sacrificing a supposedly better AMOLED panel, you get a smoother 90Hz refresh rate screen, and I’m okay with that. Colours are still vivid and there’s just the right amount of brightness so the display isn’t too dark that it can’t be used under direct sunlight.

For the most part, the bezels are minimal, but the bottom chin still has a small bezel. That’s alright, because most of the content you’ll be viewing is on the top anyways.

The realme narzo 20 Pro is much lighter compared to the phones I’ve used recently. Weighing only 191g, I couldn’t feel much of its weight in my bag or even in my pocket. The device itself feels nice in the hands with its curved edges, and the back provides nice grip so it doesn’t easily slip away from my palms.

The camera bump is rather thin, but it still does cause the phone to wobble a little when you place it on a flat surface/table.

As I’ve mentioned before in other reviews, I’m not a fan of the side-mounted fingerprint sensor. It’s too isolated and it limits the ways the user can unlock the phone’s screen. In my case, if the phone was on the table, I can only unlock with my right index finger, or pick it up and use my right thumb. For left handers, you’ll probably find it awkward, so you’ll need to use your middle finger to unlock the phone.

The addition of the 3.5mm audio jack is great for those who still use wired earphones. I, however, have moved on to using TWS earbuds full time, so this doesn’t affect me at all. Nonetheless, it’s still a nice port to have, in case of emergencies.

Navigating through the realme narzo 20 Pro is a breeze. Not a 120Hz or 144Hz breeze, but still a breeze nonetheless. The 90Hz refresh rate makes everything look smoother and flows better. Apps launch fast, and games perform great.

Playing Genshin Impact on this device is a real treat with the large display and bright colours, as it compliments the game’s visuals really well. It has most of the features you’d want for an immersive experience. A great screen, a fast-charging battery, and the selfie notch is positioned strategically so it would be hidden under your thumbs so it doesn’t affect the visuals.

The MediaTek Helio G95 gaming processor also contributed to the phone’s snappy performance, and I’ve rarely encountered any hiccups or screen lags during my time of use.

Here are some of the benchmarks we ran on the realme narzo 20 Pro with GeekBench 5 and 3DMark:

As for its camera, the realme narzo 20 Pro has a quad-camera system on the back which consists of a 48MP wide-angle main sensor, an 8MP ultra-wide angle sensor, a 2MP macro sensor, and a 2MP depth sensor. The camera UI is decent, but switching between shooting modes has a short delay.

Photo quality wise, during the day with plenty of natural lighting, the phone captures great clarity but it does somehow over sharpens the images. This results in minimal bits of noise in the background. Although, this is only visible if you zoom in and really look for them. Otherwise, each shot is great for social media.

At night, the Nightscape Mode works great at brightening up poorly lit environments. However, noise is apparent and the image processing tends to overbrighten light spots/sources.

The macro sensor on the realme narzo 20 Pro is a real treat because it can really capture crispy details even when you’re up close and personal with your subject.

Here are some of the photo samples taken with the realme narzo 20 Pro:

When it comes to audio, the realme narzo 20 Pro does come with a dual stereo speaker system. That’s one dedicated speaker grille on the bottom, and another embedded within the earpiece at the top of the phone. The phone can get really loud, with bright highs, and clear mids, which is great for watching videos with dialogues or listening to acoustics. As for the bass, it only has some clean lows, without much thump.

The realme narzo 20 Pro has a rather large 4,500mAh battery onboard. Sure, it isn’t a 5,000mAh or 7,000mAh, but what it does have is the support for realme’s 65W SuperDart Charge. This alone is a lifesaver because when the phone is low on battery, all it takes is about a half hour charge. For instance, there was one day I really hammered the battery with playing Genshin Impact on the highest settings, sound coming through the speakers, and brightness set to about 70%. After about 4 hours, the battery went down to 10%. I decided to take a rest and go for a shower while charging my phone. 20 minutes later, it was already at 85%. So I left it there for 10 minutes more while I make a cup of coffee, and when I got back, it was already full and ready for another round of Genshin.

On normal use, the phone could last me the entire day with 25% battery left. If I used the phone even more casually, it could definitely last me a day and a half.

The realme narzo 20 Pro is a mid-range device that offers decent hardware specs that were plucked from higher-end smartphones. The 90Hz refresh rate is a welcome feature, and the Helio G95 processor with 65W SuperDart Charge are a sweet deal for those looking to game long hours on their phones.

The camera takes decent Insta-worthy shots, and the inclusion of a 3.5mm audio jack makes for expanded connectivity options. Priced at RM1,199, the realme narzo 20 Pro is a great option for those not wanting an entry level smartphone, and can’t afford to spend much on flagship devices.