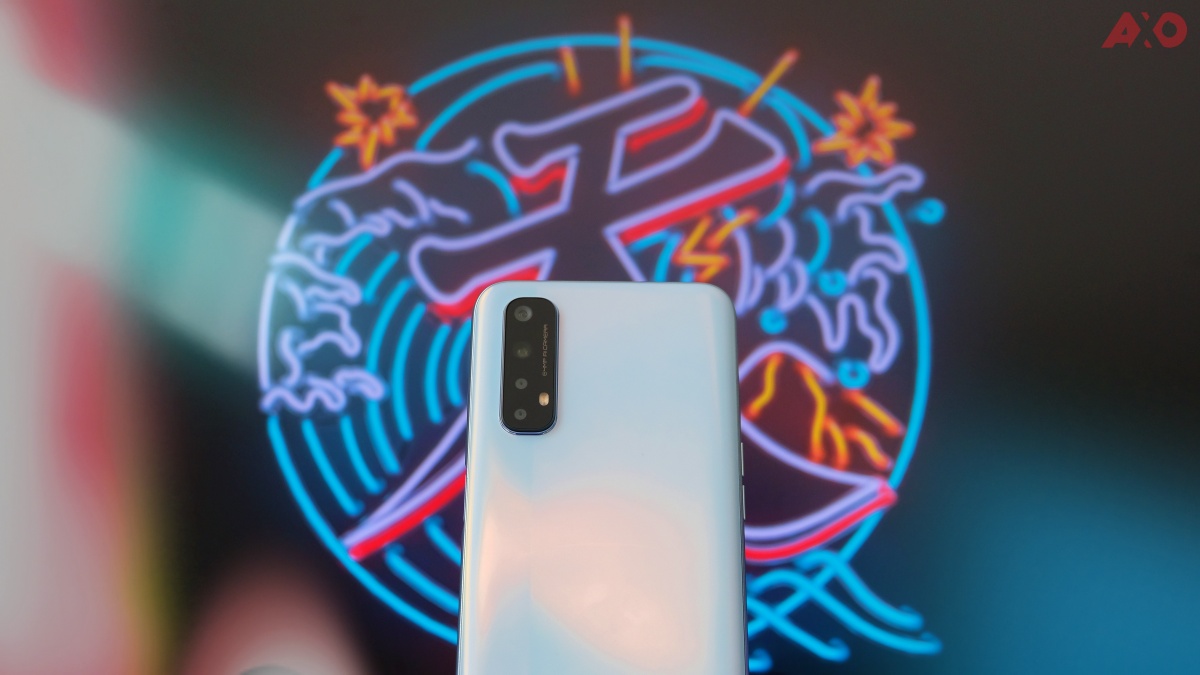 The Realme 7 is the company’s successor to the popular Realme 6, which made quite an impact on the smartphone industry in Malaysia. Quickly gaining popularity, will the Realme 7 series do the same with its offerings? This week, we have the Realme 7 and we’ll be putting it through tests to see if it’s any better than the Realme 6.

The realme 7 has a minimalist, straightforward design on the front. But when you flip the phone around, that’s where it shines, literally. According to realme, the 7 series is inspired by the mirror space in nature, so the back has gone through AG processing with classic CD textures to give it a premium-looking shine. Personally, I quite like that there’s a separation line from the camera section. It gives it a bit more edge and makes the shining lines more accentuated.

On the left side, you have the volume buttons and the SIM tray, whereas on the right, you’ll find the power button. The fingerprint sensor is also mounted right into the side power button. And on the bottom is where the USB Type-C port is, along with the speaker grille.

One of the best features about the realme 7 I would say is the display. The large 6.5-inch display can output FHD+ resolution at 2400 x 1080 pixels at 480nits brightness. Visuals are bright, and colours are vivid. But, what makes it even better is the fact that it has a 90Hz refresh rate and a 120Hz touch sampling rate. Not only will your visuals appear smoother, your touch response is also made much faster.

Sure, the bezels aren’t as thin as the realme 7 Pro, but the higher refresh rate makes all the difference when it comes to overall user experience. I cannot stress enough how important refresh rates can elevate the entire smartphone experience.

I’ve been using the realme 7 for the past few weeks, and it’s growing on me. Initially, the button placements kind of throw me off, because I didn’t like that the volume buttons were pushed to the other side of the phone. But after a while, I sort of got used to it and found that it’s easier to take screenshots by “squeezing” the phone – pressing the power button + volume down button.

Also, I did feel that the phone was a bit thick and heavy for my liking. But, it did give me a sense of security as the phone does feel like it’s built to be durable.

I noticed that the display actually has a punch-hole light effect. So when you unlock your phone with your face, the edges of the punch-hole camera would light up. This is a really nice touch, adding to the overall user experience.

I also liked that the realme 7 has a 3-card slot, which allows me to use both my work and personal numbers in one phone, and to have the option to expand my storage if one day the 128GB storage doesn’t suffice anymore.

When it comes to performance, the MediaTek Helio G95 gaming processor in the realme 7 performs well in launching apps and games, and overall daily navigation. The 90Hz refresh rate has heightened the overall performance. Even if the phone was slow, which it isn’t, the refresh rate would’ve made it appear smooth and fast.

That being said, I have had some rare occurences or hiccups when using the phone. The phone would hang for a while before catching up with the scrolling. This is a rare occassion, but it does happen.

When gaming, the Helio G95 being a gaming processor, handles games buttery smoothly. I’ve had no issues while gaming on the realme 7, and the best part is the back of the phone only gets slightly warm and not scorching hot.

Here are some of the benchmark tests we ran on the realme 7:

The realme 7’s quad camera system is headlined by a 64MP Sony IMX682 sensor, which is the exact same system as the one found on the realme 7 Pro. In the camera’s UI, there is a bit of shutter delay and moving between modes also takes a bit of time. So, it’s a bit hard to capture precious moments because one second you’re taking photos and when you want to switch to video, the nice moment would have already passed.

Apart from that, the camera is quite the performer. Details are really sharp on the 64MP sensor, and exposure management is done well. But, some pictures can tend to come out a little dark like there’s an overcast. This is mostly seen when using the ultra-wide angle, and portrait sensors, because of its aperture of F/2.3 and F/2.4 respectively.

Here are some of the photo samples we took with the realme 7:

The realme 7 only has a single speaker on the bottom, and there’s really nothing much to shout about. It can get really loud, but once you’re past the 80% mark, the audio will get distorted. Usually, i hover around the 50% music volume. The highs are bright, and the mids are clear, with the bass pretty much non-existent.

I could get through a day and a half on a fully charged battery. This includes intensive tasks like photo taking, GPS navigation, and gaming, on top of the usual email checking and social media surfing. In our 1080p YouTube video loop test, with the volume set at 50%, the realme 7 could last for about 13 hours and 56 minutes. This is actually pretty good, considering that’s a whole day’s worth of video streaming for you to binge your day away.

The realme 7 is a decent everyday performer that does everything you need your smartphone to do. The FHD+ 90Hz display is beautiful to look at, and smooth to navigate on, games run smoothly with the Helio G95 without overheating, and the 5,000mAh battery with 30W Dart Charge is large enough to get you through the entire day (Quick to get you charged back up too).

But the big question is, is it good? To be honest, apart from the upgraded processor, and higher memory configuration, not much has changed from the realme 6. Realme realised how successful the realme 6 was, so they played it safe by putting in most of the realme 6 features in a new chassis design.

For the price of RM1,299, I would say it is priced a little above its competition. There are other smartphones that offer more features but are priced lower than the realme 7. However, if you’re a fan of the realme brand, or you’re coming from a much older device, the 7 is a great device to upgrade to.

If you want more performance and a faster charging battery tech, you can always just add an additional RM200 for a better upgrade for the realme 7 Pro.