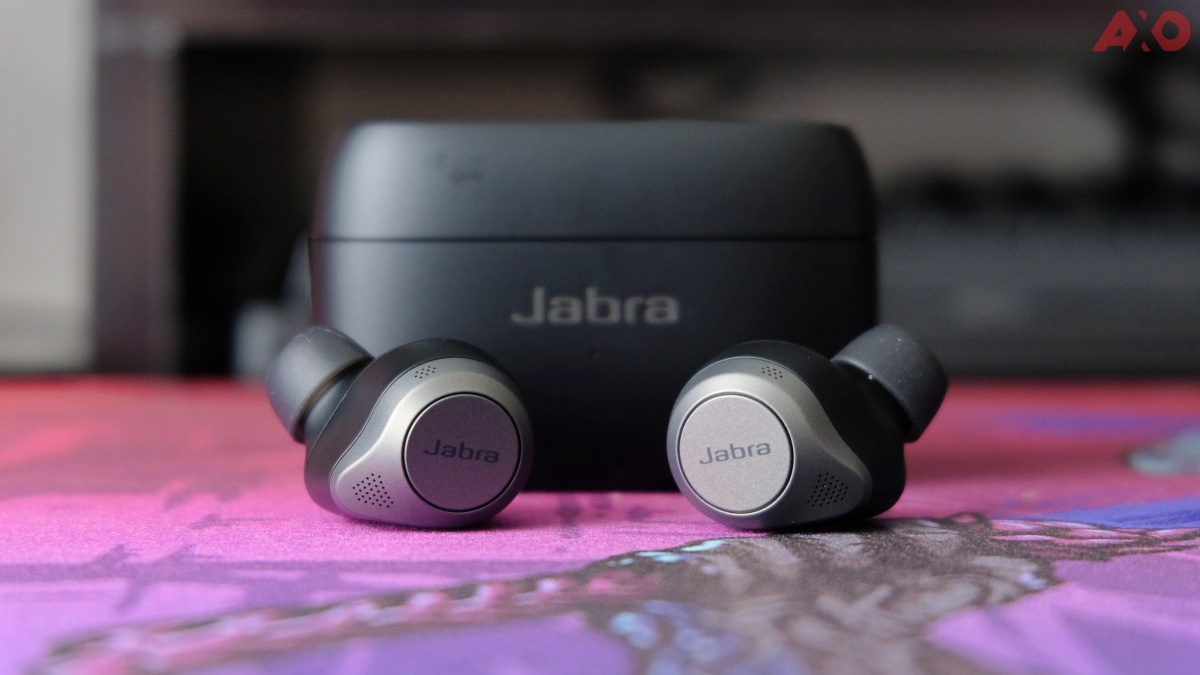 The Jabra Elite 85t is back, with several upgrades over its predecessor, the Elite 75t. These TWS earbuds doesn’t look like anything out of the ordinary, but it’s the internals that will blow you away. Not only can it cancel out sound for maximum personal satisfaction, it can also boost surrounding sound to keep you safe. Let’s take a closer look at the Jabra Elite 85t, shall we?

The Jabra Elite 85t has a moderate sized charging case, with a nice and smooth matte finish to it. The overall design is very similar to the Jabra Elite Active 75t which we reviewed before. That’s not necessarily a bad thing, because why fix something when it’s broke, right?

The charging case has a multi-colour status light on the front, whereas the back has the USB Type-C port for charging. On top of that, Jabra finally added wireless charging to the case. Now I can just place it onto a Qi-compatible charging pad and not fumble with cables anymore.

The earbuds themselves are also similar, where it has an aluminium top finish and a matte plastic bottom half. On the bottom, there’s the magnetic charging points, and the earbuds are interchangeable with the different-sized eartips provided in the box.

Compared to the Jabra Elite Active 75t, the charging case is slightly bigger, the lid’s magnetic touch point has also been made bigger, and the Elite 85t earbuds have increased in size.

As for comfort, the Jabra Elite 85t does stay in place, and is easy to wear. Regardless of how you violently you move around or shake your head, the Elite 85t manages to stay in your ear without losing its position at all.

However, because the earbuds have increased in size, my ears do tend to feel sore after long hours of use. This didn’t happen with the Elite Active 75t though.

That being said, the Jabra Elite 85t is still a very comfortable pair of earbuds to put on. I might even say it’s one of the most comfortable ones I’ve ever worn.

Once I opened up the charging case, the Jabra Elite 85t’s onboard notification lights would light up, signifying it’s been turned on. The LED is now brighter too, so you know exactly the status of the earbuds.

Pairing the earbuds with my iPhone 12 Pro Max was a no brainer. I just downloaded the Jabra Sound+ app from the App Store, pair them up from the Bluetooth settings in my phone, return to the app, and it instantly found the Jabra Elite 85t.

It proceeded to ask if I wanted custom tailored audio, so of course I signed right up. This test was also present in the Elite Active 75t, and I’m glad the company brought the feature over. Once the process was done, I was brought into the app’s main interface, which I was already familiar with.

Immediately, I had a firmware update ready to be installed. The instructions were clear, where I had to put the earbuds back into the charging case and wait for the purple status lights on the charging case to stop flashing. The firmware update did take more than 10 minutes, but it was well worth it knowing your earbuds have the latest optimization updates installed.

The wear detection on the Jabra Elite 85t is superb. Immediately when you take them out from your ear, music would be paused. Once you put it back on, your music comes on instantaneously.

Another thing I like about the Jabra Elite 85t is the eartips. Instead of using the traditional circular eartips, it has these ergonomic oblong ear tips that fit more comfortably in the ear canal. The silicon sleeves even has an earwax guard that prevent debris from filling up the speaker grille.

The Jabra Elite 85t also supports Bluetooth Multipoint, which lets you connect to two devices at once. By connecting it to my iPhone and Huawei tablet, the experience isn’t as seamless as expected. I’d still have to pause the playback on the first device, before switching to the second device. There’s a bit of lag in between, but at least the feature is available.

So the subheading on this section isn’t technically accurate, because the Jabra Elite 85t has physical buttons instead of a touch panel. But, that just means each press is accurate and fast in response. The buttons are big enough, and it’s very hard for you to miss.

You can customize all single, double, and triple taps with their respective commands, while the long press is locked to volume control. These commands include:

I could easily just change tracks, adjust the volume, or even answer/end calls on the fly. The clicks are also fairly loud so you’d know you definitely pressed something.

When it comes to the audio quality, there is no doubt about the kind of sound performance Jabra could offer. They’ve made some of the best sounding TWS earbuds, and this is continued in the Elite 85t.

What you get is great soundstage and impressive sound isolation from each frequency. The highs are bright with minimal distortion, and the mids are amazing for clear yet bassy vocals. If you’re someone who appreciates good lows, the bass performance on the Jabra Elite 85t will knock your socks off. It’s clean when it should be, it’s dirty if you want it to be. Every song you play through the Elite 85t just sounds amazing, regardless of the genre.

Unfortunately, the earbuds only supports the SBC and AAC codes only. Till now, Jabra still hasn’t included aptX in the Elite 85t. Not a dealbreaker, but it would’ve been nice if Jabra could include it with the earbuds’ asking price.

Now, about that ANC. It’s great in the sense that ANC and HearThru is adjustable, but it doesn’t work as well as I thought it would during my testing.

Even with the ANC levels cranked to the max, using feedforward and feedback noise cancelling, I could still hear my hands clapping and finger snapping right in front of me. With certain other TWS earbuds, their ANC could cancel that out, even a running hair dryer and running faucets too.

When it comes to HearThru, even at max level, I could only hear my wife talking very faintly. Even the Jabra Elite Active 75t had better ANC and Hear Through performance, even when it didn’t have ANC at launch.

I’ve tried changing all the eartips, and even resetting the tailored music experience to default, but still it didn’t work as well. Hopefully, Jabra can fix this with a firmware update, just like how they added ANC to the Elite Active 75t.

Call quality wise, I can hear the person calling loud and clear, with no issues at all. However, even with the six microphone array, my voice sometimes doesn’t get picked up if my voice goes below a certain volume threshold. I’d have to speak up louder for the person calling to hear me. But, when they can hear me, my voice is crystal clear for them.

This could be the earbuds losing connection mid-call and reconnected immediately, we’re not sure. But again, this is something Jabra should look into for their next firmware update for the Jabra Elite 85t.

On full charge, the Jabra Elite 85t lasted me for about 5 hours and 32 minutes, and that’s with ANC on and volume levels at 60%. So if you listened to your music at a lower volume with ANC off, you could definitely get longer battery life out of them.

On a 4-hour Discord call, the earbuds didn’t even play the “low battery” voice prompt, which is really impressive.

When it comes to charging, the charging case took about 3 and a half hours to charge to full wirelessly. If you prefer USB Type-C charging, it would only take about 2 hours to charge back to 100%. The Jabra Elite 85t also supports fast charging, where a 15-minute charge in the case can give you about an hour of extra playtime.

The Jabra Elite 85t is a great pair of TWS earbuds, but it has more room to grow. If you want to bring this with you on your commute, it’s the best you could carry. It handles basically any type of media content you throw at it, and it handles them well. It sounds amazing, but it could use some help in the microphone and ANC department, which can easily be fixed with a firmware update.

Also, if you want to bring this for more excruciating workouts, the Jabra Elite Active 75t would be a better choice, because it has an IP57 rating for dust and water resistance and longer battery life. While the Elite 85t only has an IPX4 rating and shorter battery life, it has dedicated processor for ANC, and one additional microphone on each bud (compared to the Elite Active 75t).

Priced at RM1,049, the Jabra Elite 85t‘s price may be hard to swallow. But from what we’ve tested, it definitely has the potential of being one of the best TWS earbuds in the market, as long as it’s had its kinks ironed out.

In this article:audio, Earbuds, Jabra, TWS

Jabra, recently showcased its extensive true wireless range at the 2023 Consumer Electronics Show (CES), with the latest additions to its Elite and Evolve... Jabra introduces the newest addition to its true wireless range. This is the Jabra Elite 5 that comes with prominent features such as hybrid...

Jabra announced its latest addition to the new Elite series, with the Jabra Elite 4 Active. The earbuds are well suited for those who love an active lifestyle, including popular workouts...