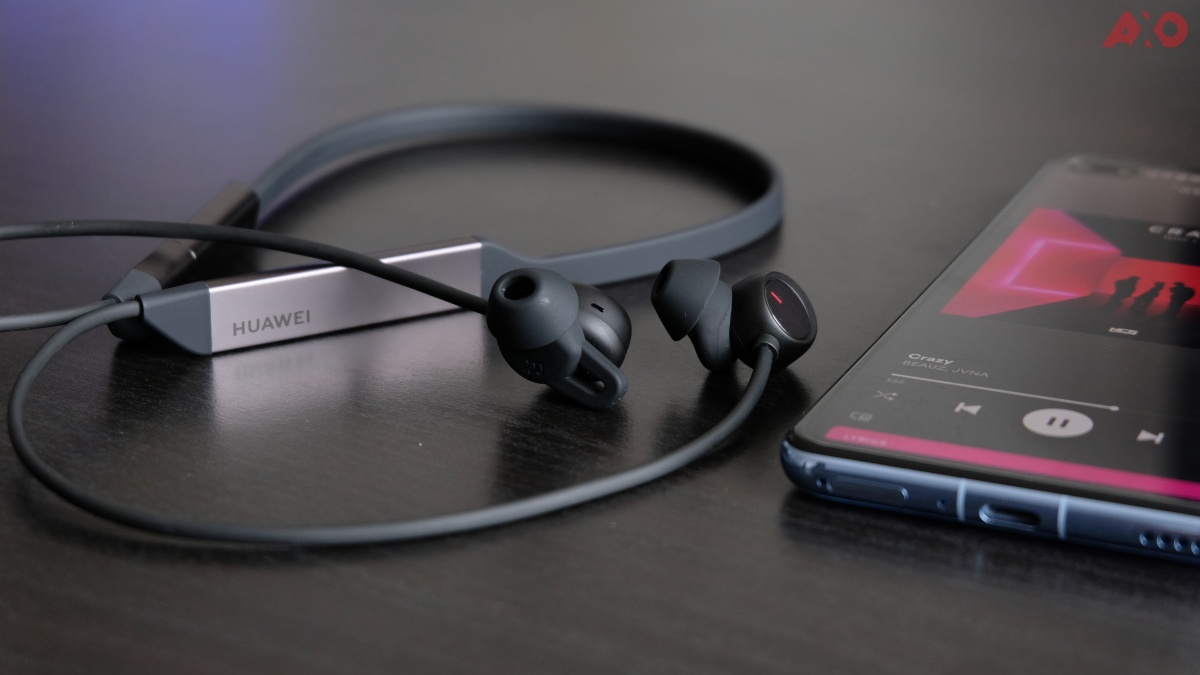 The Huawei FreeLace Pro is one of the company’s latest wireless audio products, announced alongside the Huawei Watch Fit. Despite it not being a TWS earbuds, is it actually bad? We were quite surprised with the results, so let’s dive right into the review.

The Huawei FreeLace Pro is like a hybrid of a earbuds. It’s wired in the sense that both earbuds are connected by a cable, and wireless in the sense that it connects to your smartphone wirelessly via Bluetooth.

I think the Huawei FreeLace Pro actually looks good and feels great with the materials used throughout the earbuds. It has a thicker hypoallergenic strap on the back, where it would rest on your neck, while the earbuds have a thinner standard audio cable. There are also the physical control buttons right where the thicker and thinner straps connect. This is where you can actually pull out the right earbuds out to reveal the charging port.

The earbuds themselves are rather large, especially with the wingtips. But the good thing about them is that they attach to each other magnetically. So when you’re not listening to music, you can just take them out and they’ll magnetically attach to one another roughly around your chest area.

Pro-Tip: To be sure you don’t lose it once you’ve taken it out, keep the earbuds magnetically connected.

When it comes to comfort, I’ve been spoiled by all the TWS earbuds I’ve had to review before this. So, having a strap around my neck does annoy me a little. But what I did realize is that after I’ve worn it for a while, my mind sort of ignores the strap and it feels as if it isn’t there. If I were to actually feel the strap, it’s actually quite comfortable and doesn’t feel annoying at all.

As for the earbuds themselves, I had to switch out the wingtips with a bigger one to get the right fit. Once I did that, the earbuds stayed in place and wouldn’t budge no matter how much my head moved. But when i do headbang, the earbuds are the least that concerns me because it’s the neck strap that would move a lot. So those of you looking to get the FreeLace Pro for dancing, be mindful of this before purchasing.

After wearing the earbuds for prolonged periods, my ears do get a little sore. When you’re wearing them, it’s fine. But after you’ve worn them for several hours and you finally take them off, you can feel a little pain on your ears. Of course, everyone’s ear shape is different, so this might differ for you.

The Huawei FreeLace Pro is a pretty straightforward wired wireless earbuds. To pair it with your device, it’s literally plug and play (well, almost). Just press and hold the power button, pull open the right earbuds, and plug the USB Type-C port to your phone. This starts the pairing process and also charges the earbuds at the same time. A pop-up window will appear asking to pair your device, just tap “Connect” and you’re good to go.

From there, you can customize more of the FreeLace Pro’s settings in Huawei’s “AI Life” app. The level of customization you can do in the app isn’t a lot. Basically, you can change the noise cancellation settings between noise cancelling, awareness, and turning it off entirely. Apart from that, you can perform firmware updates, change what the touch panel on the left earbuds and power button does, and that’s about it.

There are no further customization for the touch gestures and power button, you either control noise control or switch devices respectively, or turn the features off. Also, there is no equalizer settings to be changed too. There is no wear detection, so if you take the earbuds off, know that music will still be playing and that consumes battery.

As for the physical buttons, they are placed a little too near the neck for my liking. I would’ve preferred for them to be a little more recessed downwards, away from the neck. This is so that it’d be easier for me to reach the controls and I won’t accidentally touch my neck all the time. It does take a bit of time to get used to the button’s positioning, but once you’re familiar with them, you’ll get to them faster than before.

One thing I really liked about the FreeLace Pro is the ability to quickly change the connected device. Just double tap the power button, and in about 5 seconds, you’re transferred to the last device the earbuds were connected to.Unfortunately, this also means the earbuds can technically be connected to two devices only. If it’s more than that, then it might be a little confusing which device you’re connected to.

One thing I was really surprised with the Huawei FreeLace Pro is the audio quality. It’s packing a lot of bass with the 14.2mm dynamic drivers, thanks to the dedicated bass tube that counteracts the back wave coming off from the back of the drivers.

The bass is low, it’s punchy and every beat you hear from this orgasmic. As for the highs, it’s decent with great amounts of treble, and not too much of it. As for the mids, vocals sound great and the frequencies are all isolated well. You won’t hear any distortion even if you crank the volume all the way up to 100%.

When it comes to the active noise cancellation (ANC), the two MEMS microphones do an excellent job of cutting you off from the outside world. I can barely hear anyone talking around me when wearing the earbuds. In Transparency mode, I can faintly hear any sound being picked up from my surrounding. So, I don’t think the feature works that well. Even when ANC is turned off, the sheer volume is enough to drown out any environmental noise around me.

When using the Huawei FreeLace Pro for gaming, the low-latency Gaming Mode automatically kicks in when you start a game. So, there is no need for me to press any button before I head into a game.

The latency is lowered to as low as 150ms. But, I can still notice a very, very slight delay from the game’s audio. When it comes to movie or video watching, the audio delay is less notice-able.

As for call quality, the Huawei FreeLace Pro actually sounds really decent. Calls are crystal clear, on both my end and the receiving end. The receiving end says the call is both loud and clear enough to perfectly make out every word I am saying. But, if you were to use the FreeLace Pro for long conversations lying down, it might get a little annoying around the neck.

When it comes to battery life, the Huawei FreeLace Pro has a built-in 150mAh battery that powers the earbuds. According to Huawei, with ANC off the earbuds can last up to 24 hours. In my test, I managed to get 23 hours and 36 minutes of use with the volume level set at 50%. With ANC turned on and 50% volume, I could get about 15 hours and 34 minutes of use.

Because the earbuds support the fast charging feature, plugging it into your phone also charges it simultaneously. 5 minutes of charge will give you 5 hours of music listening, and in my test, I only got 4 hours and 48 minutes – close enough.

To charge it, you need to pull out the right earbuds to reveal the charging port. And, you will need to use the adapter cable to allow charging. One problem I can see is, if you lose this adapter cable, you’ll need to plug it into the wall charger directly and it has to be a USB Type-C female port.

It is best suited for commuters, frequent travelers, or people who do a lot chilling and easy listening at home. It would be great for businessmen/women too if they don’t mind the earbuds sticking out of their neck.

In this article:Earbuds, huawei, TWS

The new Huawei MatePad 10.4 priced at RM1,599 comes with worthwhile free gifts such as the Huawei Smart Keyboard with your purchase worth up to...

HUAWEI announced the latest member to its nova series, the HUAWEI nova 9 SE. Continuing the philosophy of delivering powerful flagship-like level performance and...