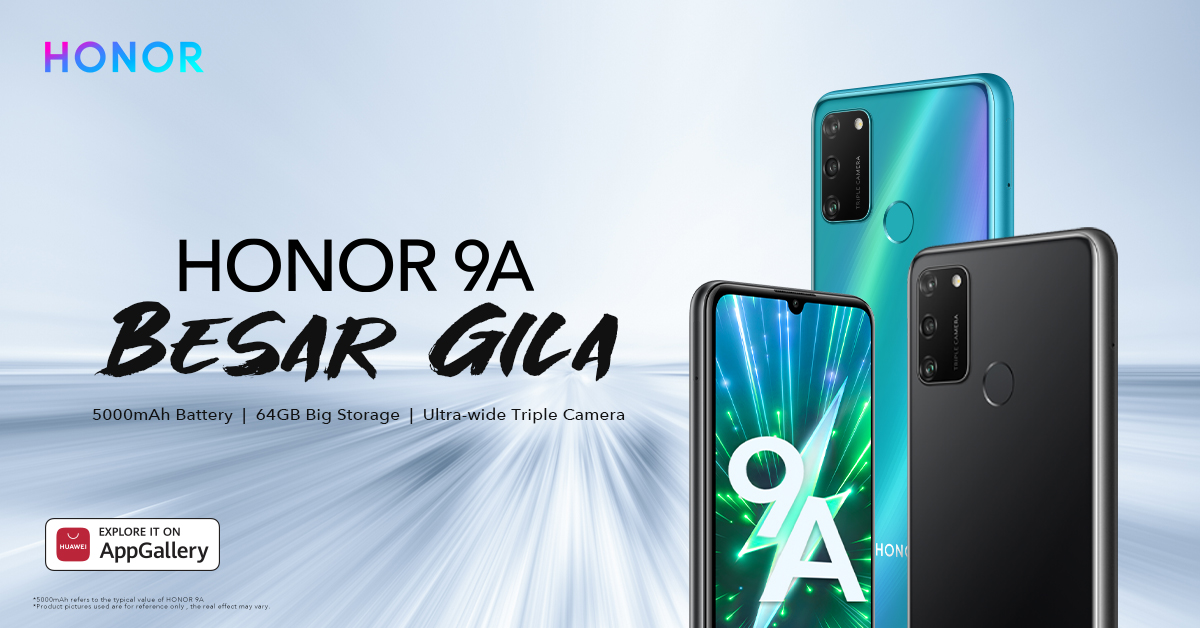 Under the theme of “Power Your Life, Live with Honor”, Honor has officially announced the brand new Honor 9A smartphone. As a key market for Honor, Malaysia will be one of the first countries to receive the Honor 9A.

The smartphone isn’t the only product announced though, as there’s also a new pair of TWS earbuds – Honor Choice True Wireless Earbuds, together with upgrades for the existing Honor Magic Earbuds and Honor MagicWatch 2.

The Honor 9A mainly boasts in its large 5,000mAh battery. The company claims it can support up to 33 hours of 4G calls, 35 hours of video playback, and 37 hours of FM radio playback. Weighing just 185g, the device is thin at 9.04mm. The device also supports reverse charging capabilities, where it can reverse charge other devices at 5V 1.2A.

Powered by a MediaTek Helio P35 processor, the Honor 9A comes with support for dual 4G SIM and VoLTE connectivity. It is also paired with 3GB of RAM, and 64GB of storage (expandable via microSD up to 512GB).

For its screen, it has a 6.3-inch dew-drop FullView Display. The IPS LCD panel has a HD+ resolution with a 20:9 aspect ratio. In the camera department, it has a triple rear camera system which consists of a 13MP main sensor, 5MP ultrawide sensor, 2MP depth sensor, and an 8MP sensor for selfies on the front.

Running on Magic UI 3.1 based on Android 10, the Honor 9A will not have Google services onboard. But instead, have Huawei AppGallery for a seamless experience moving forward.

The Honor 9A comes in only two colours – Midnight Black and Phantom Blue. It will be priced at RM549 and available for purchase on Hihonor, as well as Honor’s official stores on Shopee and Lazada starting on the 26th of June, 12PM.

Advertisement. Scroll to continue reading.
In this article:HONOR, smartphone