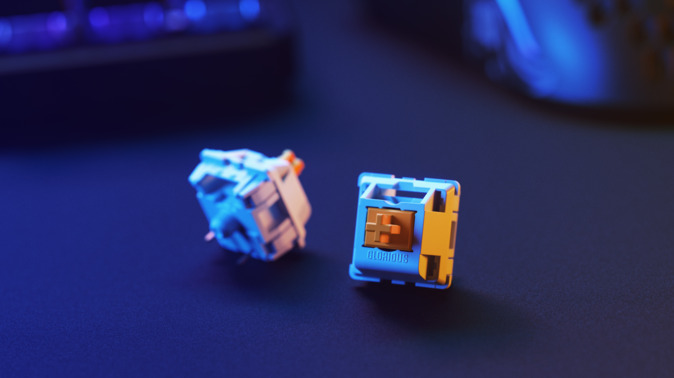 The Glorious Panda mechanical switch, previously known as the Glorious Holy Panda (GHP), has now officially been launched by Glorious. Seeing the product name, you may think “Why does that sound familiar?” or “I’ve seen that name before”. Well, we don’t blame you. It is very similarly named after the Holy Panda switch made by Quakemz, who’s the original creator of the Holy Panda.

What Is The Holy Panda?

The Holy Panda is a popular mechanical switch that is sought after by many mechanical keyboard enthusiasts, including myself. It’s a hybrid key-switch, which is made from the stem of an Input Club Halo switch in the housing of a Panda switch. What you get from a Holy Panda switch is a crisp but smooth tactile bump with little pre-travel.

Now Drop (formerly Massdrop) is an e-commerce platform that does group pre-orders, and each of these group buys are called “Drops”. Authentic Halo switches and stems have only been available through Drop, as agreed with its manufacturer, Kailh. And Drop is where pre-assembled Holy Panda switches with authentic stems and re-tooled housings have been made available from late 2018 to 2019.

Glorious PC Gaming Race provides gaming hardware and accessories, which you may know them for the GMMK mechanical keyboard, or the ever-popular Glorious Model O gaming mouse.

Started in 2014, Glorious was built by PC gamers, for PC gamers, where they strive to make affordable gaming gear without comprimising on quality. They’ve manufactured multiple gaming peripherals for gamers around the world, which includes their newly released Glorious Panda mechanical switches.

I Thought They Were Called Glorious Holy Panda?

Yes, that is in fact the original name of Glorious’ Panda mechanical switches. Backtacking a little here, Glorious’ focus for the year 2020 was to get back into the mechanical keyboard market. Once a niche industry, is now a booming one with more and more users wanting to find their “endgame” with their mechanical keyboard builds.

Unfortunately, the only way for keyboard enthusiasts to get great gear for their mechanical keyboards was by following group buys closely, or to purchase them for hiked up prices from the aftermarket.

Realizing this, Glorious wanted to create a switch that can be mass-produced for the community, while keeping prices relatively affordable. The Holy Pandas were marked up pretty high, with consistency and stock issues. That served as an inspiration for Glorious to come up with the Glorious Pandas, and the company managed to secure the original INVYR Panda tooling. With that in the bag, Glorious was confident they could mass produce them, and make them more affordable for everyone while improving material quality and making key design tweaks.

So, Is It Glorious Panda Or Glorious Holy Panda?

Initially, it was named as the Glorious Holy Panda because it paid homage to the original Holy Panda mechanical switches. Many users would consider the “Holy Panda” name to use 100% Halo stems, while Glorious used their own stem. Apart from the stem, Glorious utilised as many original parts as possible, including the INVYR housing and leaf. That is why Glorious put their brand name in front of Holy Panda, to showcase their take on the infamous switch.

However, the keyboard community didn’t take too kindly of the usage of the word “Holy” in Glorious’ take on the Panda switches. To make matters worse, Glorious filed the trademark for “Holy Panda”. Many thought that this was the company trying to claim ownership over the name and to sue everyone else who would use the name.

In Glorious’ defense, their lawyers advised them to file the trademark as a defensive move so they don’t get sued in the future, and not to go after others. But once the company heard the feedback from the community, they’ve since changed their switches’ name to “Glorious Panda”, and filed a trademark for that instead. As for the “Holy Panda” trademark, Glorious has withdrawn it and will no longer pursue them.

Glorious even reached out to the original creator of the Holy Panda switch, with an offer to transfer the trademark to him as “protector” once it was registered. However, he respectfully declined, thinking it’s best if the company just changed the switches’ name.

I understand how the mechanical keyboard community could get upset with Glorious’ naming scheme for their new switches. I mean, it isn’t the real thing and no matter how close it is to the original, it was just a new take on the switch. So no, I too, do not agree to the GHP name, but it was good effort that Glorious really listened to the community. They took immediate action with the trademark name, and also changing the name of their switch. In fact, I feel the Glorious Panda name is actually better, as it has more authenticity and personality to it.

Where Can I Get Some?

If you want to get one for yourself, the Glorious Panda switches are available for purchase on their site.

In this article:Gaming, Glorious, Mechanical Switches