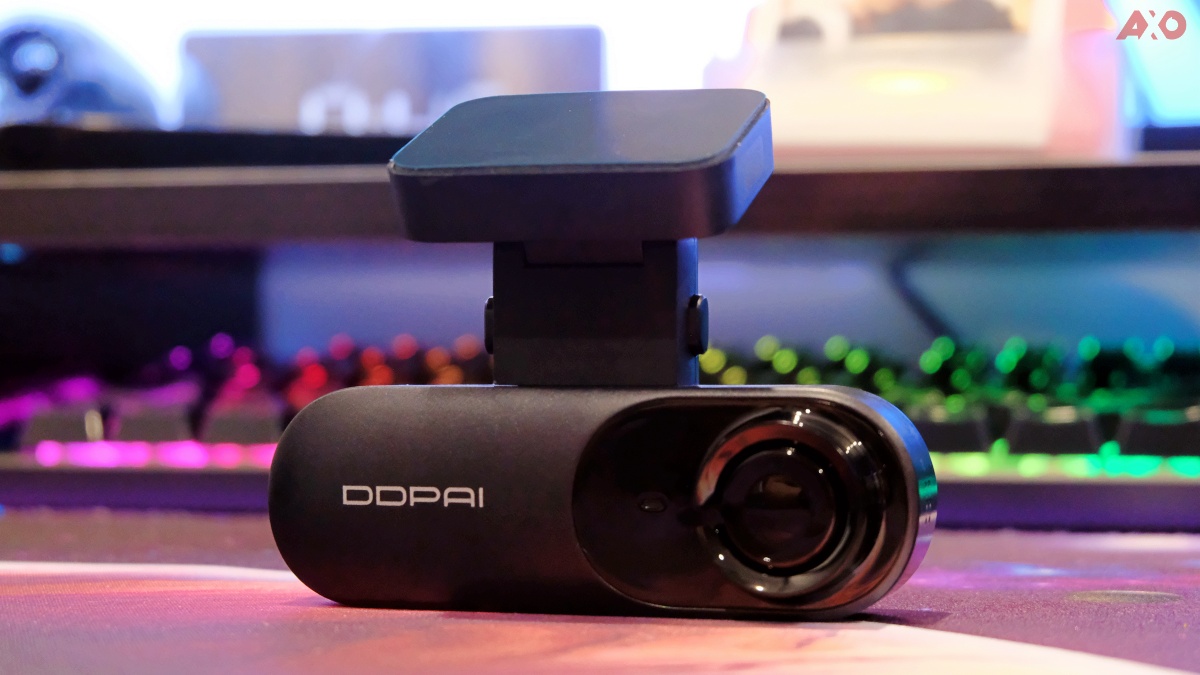 The DDPAI Mola N3 is a dash cam that has GPS functionalities built for your car, complete with a vast array of features to assist with your driving too. Dubbed the “CCTV for your car”, DDPAI will be having a special offer for the N3 during the upcoming 10.10 sale, and this review we’ll be answering, “Is the DDPAI Mola N3 Dash Cam any good?”

The DDPAI Mola N3 Dash Cam does come with everything you need in the box to get you started. From the charger to the cable, the 3M sticker to the installation tool, you won’t need anything else to assist with installing it in your vehicle.

The DDPAI Mola N3 Dash Cam features a minimalist design, with a matte black finish throughout the entire chassis. It’s features a pill-like shape, and is light and tiny. It does attract fingerprints, but you won’t be touching it much anyway.

On the front, you will find the 5MP main sensor with 6P lens, and a large aperture of F1.8. With the lens, is an infrared filter to reduce blurriness and improve night recording performance. The camera has a field of view of 140-degrees, which lets it record all three-lanes in front of you. It is also capable of 2K resolution, which allows it to record wider 1600p HD video at 30fps in the H.265 format.

On the top, you will find the USB Type-C port to connect with the camera holder, as well as the built-in ventilation ports for heat dissipation. On the bottom, there are two additional venting holes, with the microphone, and the reset button. On the left, you will find the microSD card slot which is protected by a rubber flap, while the right side has the speaker.

The camera holder is where you will connect the microUSB charging cable to the charging adapter. From there, the N3 dash cam itself will then be plugged in to the camera holder for power. It’s packed with a unique two-fold rationally symmetrical connector design, so you can also flip it around to capture selfies, or video clips of you and your friends during your trips.

However, this also means that if the cable is loose or accidentally taken out, there is no backup battery so it will stop any recording.

The DDPai Mola N3 Dash Cam does not have a display, as having one would be easier to change the settings from the dash cam itself. But why change settings on such a small screen, when you can do it on your smartphone’s screen which is at least twice as large? The N3 dash cam does have app connectivity so you can view the viewfinder and tweak all the settings right from the app itself.

And with that out of the way, let’s move on to setting up.

Setting up the DDPai Mola N3 was rather easy. Even without reading the user manual or installation guide, I could figure it out on my own. First, wipe clean the inner front screen of your vehicle. Second, stick the protective transparent sticker to the inner screen of your car. Next, stick the 3M sticker onto the rear of the camera holder.

And then, you’ll need to plug the DDPAI Mola N3 to the camera holder and stick it onto the transparent sticker. After that, connect the power cable to the camera holder and the dual car charger. Next, insert a microSD card and start pairing it with the DDPAI app. Lastly, route the cable properly to keep it hidden on the seams and crevices of your car, and you’re done. If you need help with opening the panels of your car, just remember this is where the installation tool comes in handy.

Sticking the dash cam on was the easy part, but the hard part is the routing of the charging cable. Also, you might want to double and triple check that the camera holder is perfectly centrally aligned so your recordings aren’t slanted.

After you’ve started up your car, when the LED light facing you turns blue, that’s when it has started recording.

The DDPAI Mola N3 is easy to use, and it has never caused me any trouble or annoyance. Although I did wish that it had a physical display, but in retrospect, it would’ve been a distraction anyway.

All settings and screenings are done right from the app, and I’m kind of glad it’s setup that way. All that is required of me is the initial setup, and from there, all recordings are done by the N3 dash cam, and I didn’t have to lift a finger to do anything else with it. Do note that your phone will need to connect to the dash cam’s Wi-Fi, so you will lose data connection when you’re doing any setup or settings change.

The DDPAI Mola N3 Dash Cam is quiet, and there isn’t any sound coming from the ventilation holes. Initially, I thought there would be sound coming from the friction between the dash cam and the camera holder, but I was wrong. On the contrary, I really love the traffic light reminder voice prompts. So when the light turns green, the voice prompt will tell you it’s green so you’d know it’s time to move.

When it comes to angle adjustment, you can only tilt the dash cam vertically and not horizontally. But that’s okay, since the camera sensor can already capture 140-degrees, and it really does capture the entire scene in front of your windscreen.

The DDPAI App is your one-stop hub to let you change the settings of your N3 dash cam. Compatible with both iOS and Android, the dash cam can record video and capture images. Do note that the dash cam does support loop recording, so the oldest images and videos are deleted once your memory has become full.

The app works very well, and changing of settings are really easy. Navigation can be a little confusing at first, but after a while you’ll get used to it and know where everything is. When viewing the footage, you can also expand it fullscreen to full details like car movement speed, and more.

Apart from that, with the DDPAI App, you can also:

Powered by a HiSilicon dual-core processor, paired with 1GB of RAM, the DDPAI Mola N3 supports microSD storage of up to 128GB. Connectivity wise, it supports Wi-Fi, has a three-axis gyro sensor, GPS, and charging via USB Type-C.

The DDPAI Mola N3 records really great footage, even in lowlight conditions. Everything was clear, although you can’t see text or number plates that clearly at night, but it’s still very visible.

Stabilization wise, the N3 dash cam is quite stable. Though going through speed bumps, you can still notice a little bobbing. But that’s okay, considering how bumpy all Malaysian roads are.

One of the main highlights of the DDPAI Mola N3 Dash Cam is the fact that it has a built-in GPS. This lets you track your vehicle’s location and movement speed. On top of that, the ADAS (Advanced Driving Assistance System) ensures your safety by broadcasting a voice prompt when the vehicle in front of you is exhibiting a weird behaviour, or when there’s a person in front of your car.

The DDPAI Mola N3 Dash Cam also features a 24-hour parking monitor. When the car has been stationary for 15 minutes, the Gsensor will detect that the car has entered a dormant state. From there, it will start recording at 1 frame per second. During playback however, it will still be played at the normal speed of 30fps. When the battery voltage is lower than the set battery voltage protection threshold, the dash cam will shut down. When the dash cam detects a collision, it would start normal recording for two minutes, and then enter dormant recording again.

Another cool feature that comes with the N3 dash cam is the SR Sci-Fi Driving feature. Do note, however, that this feature is only available on the GPS variant of the Mola N3. The SR stands for Sense Reality, and it uses the 6-axis gyroscope to sense:

From these detection, it can generate a tracking interface that shows your driving journey in the third-person view. You can also share this tracking on your social media platforms.

The DDPAI Mola N3 Dash Cam will be offered at two prices during the upcoming 10.10 sale on Lazada:

Sure, it doesn’t have a display. But, you can view it and change settings from your smartphone’s larger display. For the features included, the N3 Dash Cam is definitely worth the price to install further security measures within your vehicle. Not only does it keep your car and your journey safe, it’s small, easy to install, and it records high quality videos.

To purchase one for yourself, here’s a 5% voucher for you.