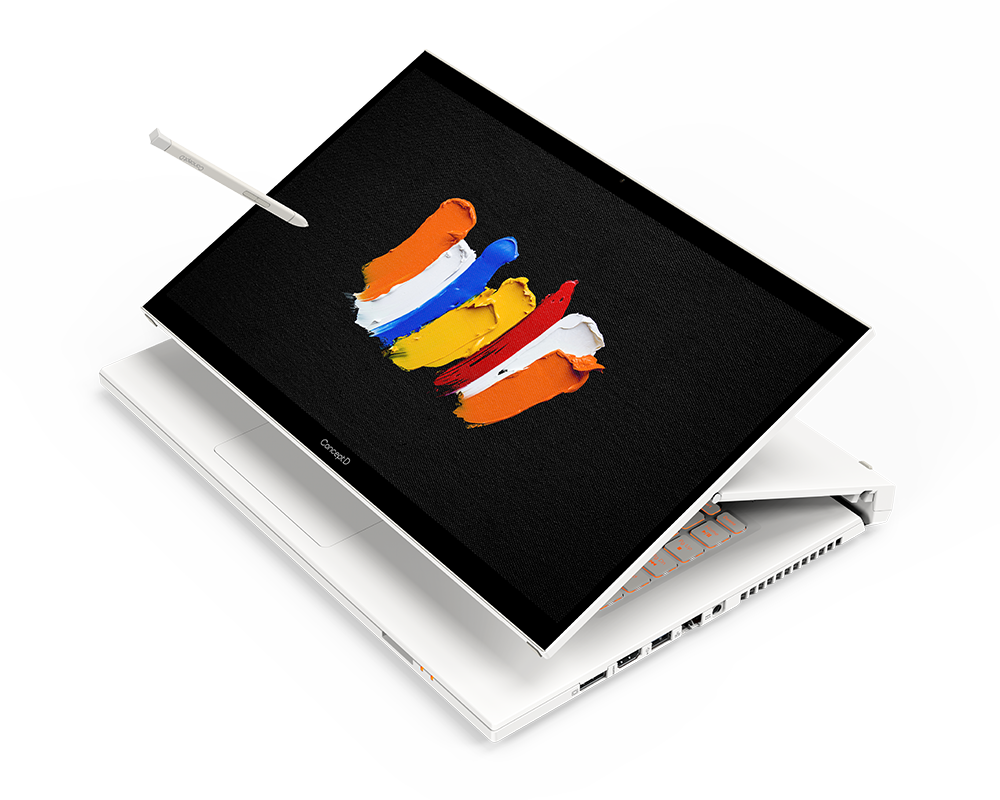 At CES 2020, Acer also seized the opportunity to introduce new ConceptD products – the ConceptD 7 Ezel Series. The series consists of a convertible notebook, and a powerful workstation.

As its name suggests, the ConceptD 7 Ezel Pro and ConceptD 7 Ezel utilises Acer’s Ezel hinge, letting the laptops be used in multiple modes. These machines were made for content creators, so they do include Wacom’s EMR pen. Users can choose to use the Ezel series laptops via:

The ConceptD 7 Ezel features up to a 10th Gen Intel® Core™ H-series processor coming soon, NVIDIA® GeForce RTX GPUs, up to 32 GB of DDR4 memory and up to 2 TB PCIe SSDs. There is also an optional version of the ConceptD 7 Ezel that has Intel Xeon™ processor, NVIDIA Quadro RTX™ GPU, ECC memory support running on Windows 10 Pro.

As for its IO ports, both the ConceptD 7 Ezel Pro and ConceptD 7 Ezel has two Thunderbolt™ 3 ports, an SD card slot, one DisplayPort 1.4 port, one HDMI 2.0 port and a glass touchpad. The power button also doubles as a fingerprint reader that’s compatible with Windows Hello.

The ConceptD 700 Workstation however features an Intel Xeon E processor and up to NVIDIA Quadro RTX 4000 graphics. It can pack up to 64GB of 4x DIMM 2666 MHz DDR4 memory, and fast storage options like an on-board PCIe M.2 SSD. It has four internal storage bays that support both 2.5-inch and 3.5-inch HDDs.

Apart from having three cooling fans on the front and a pop-out headset cradle, the top also features a wireless charger to charge your smartphones. Customers can also monitor system statuses and do simple troubleshooting using the ConceptD Palette.