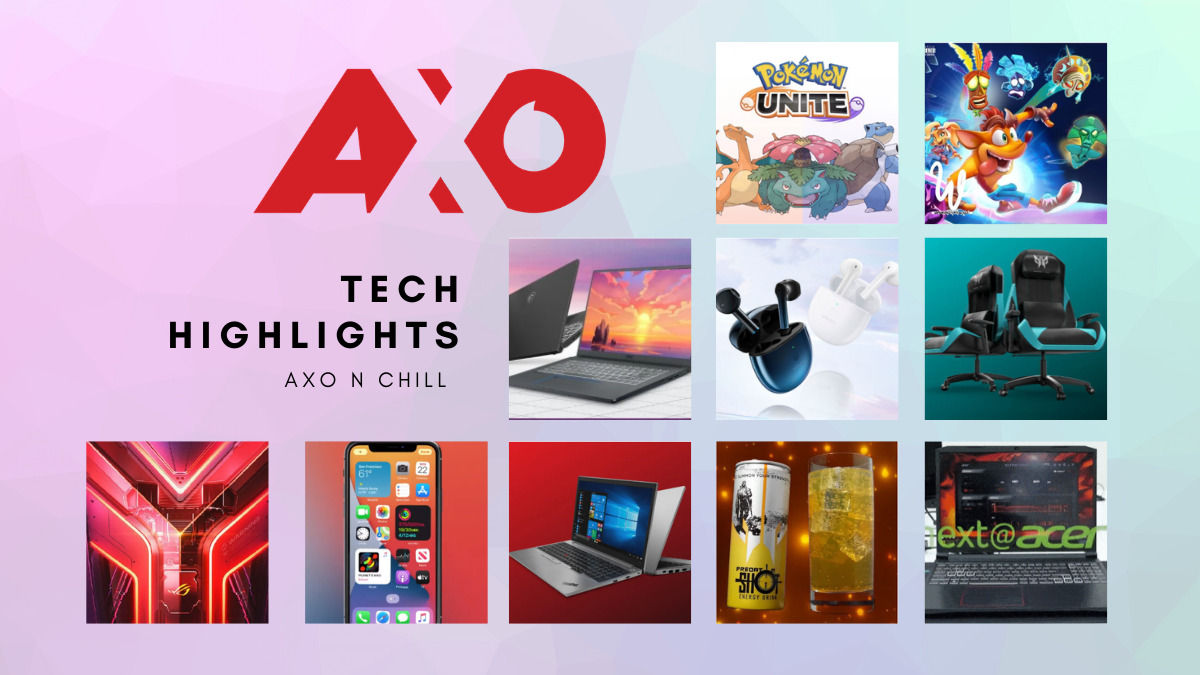 To start off this weeks AXO N Chill, we are having a giveaway on our FB Page.

You know the drill, like, tag and share! This time we need you to capture a unique code from the article here, to be able to participate.

Thanks to guys behind AniManGaki, Playtonia will be sponsoring a Corsair Wireless Headset for this giveaway collaboration. Did I mention they are bringing AniManGaki this year ONLINE?! Anyways, good luck!

As usual, let’s take a look at what videos did we roll out this week. We have pretty interesting catch.

Just a while ago, we had our hands on a few products that we launch during the [email protected] 2020 before the global launch. We would say that the products are pretty innovative. Let’s take a look.

Here we have the Concept D3 Ezel, Predator Orion 3000, Acer Swift 5(2020) and more! Although there are no news of when these products will be landing in the Malaysian market yet, we do hope to see them soon. ]

For more details on the products, check out our article below:

Asus ROG Zephyrus G14: We Are Still Teasing You With This Babe!

We assure you, by the time you see this next on our channel it’ll be a full review and you would be able to grab it in stores. From what we know, one of the variant for this model would be priced at RM 7,699 and it will be available in stores staring from 29th June, 2020.

For more details on the spec, check out our article below:

ASUS ROG Zephyrus G14 with AniMe MatrixYou didn’t read that wrong. Malaysian ROG fans will be getting the AniMe Matrix model of the Zephyrus G14, and our review unit is one of the models that has the feature. We’ll definitely show more of it in our review video, but for now, why don’t we show you its specifications and pricing?

Did you miss this? The iOS 14 was announced earlier this week and it has 15 new features that made the UI all better. Those android fans may go on about how android has all the features way before this, but this would definitely be a plus for all iPhone users!

It is said that the public beta will roll out somewhere between July, 2020 but there is no exact release date yet. Here’s what you need to know:

15 New Features on iOS 14Apple has finally added widgets on the home screen in iOS 14. Before adding a widget, you can choose what size widget you want placed on the homescreen. The design are all unified and streamlined, so each app’s widget fits the overall iOS look

Well, gamers with sore back. Predator X OSIM Gaming Massage Chair was unveiled earlier during the [email protected] Why not? We haven’t have the chance to try it out yet, but hopefully it will be in Malaysia soon and we will let you know.

Predator x OSIMWe really like how it looks and can’t wait to try it out for ourselves (if possible). And to put the cherry on top, the chair even has two built-in Bluetooth speakers to deliver a “surround sound” effect.

I did mention a drink earlier on did I? Acer surprised us by introducing the Acer Predator Shot.

Acer Predator ShotAcer claims the Predator Shot to be filled with necessary vitamins and minerals that may likely improve your gaming performance, all whilst keeping you refreshed and energised. Sure, there may be tons of caffeine added as well, but let’s not get sidetracked here.

After teasing on the outlook of the ROG 3 Phone last week, we finally gotten hold of the official launch date of this smartphone beast. It will launch in China on the 7th of July, 2020.

Asus ROG Phone 3 Launch ConfirmedApart from the release date, Asus didn’t provide any more details regarding the phone. Not the tech specs, not even a glimpse of the device. What they did reveal is this pretty cool teaser poster.

Vivo: TWS Neo To Be Available In Malaysia

Vivo just announced that the TWS Neo will be available in Malaysias somewhere along July, 2020. It is the first true wireless earbuds to feature Qualcomm’s aptX Adaptive codec over Bluetooth 5.2. Which means better voice experience, regardless music or calls.

Vivo TWS Neo EarphoneOn top of that, the Vivo TWS Earphone Neo also has an IP54 rating that protects it from dust and liquids. So, you don’t have to worry as these earphones are safe for exercises, as long as you don’t bring it swimming.

To know more, check out our article below:

Lenovo ThinkPad E14 and E15The ThinkPad E14 and E15 laptops offer an improved screen-to-body ratio of 85% on their 14-inch and 15.6-inch displays respectively. Built for security, for the first time, the E series also features a touch fingerprint reader, a ThinkShutter for webcam security, as well as an optional IR camera with Glance by Mirametrix technology.

To those considering to grab a MSI laptop, you can do so now with a promotional price and additional freebies to grab with each purchase.

Check out the promo below:

MSI Mid Year PromoThe promotion will be running from 22nd June – 12th July, 2020 and it is available at any MSI Store or retailers nationwide.

Let’s Pack In Two Games In This Week’s Highlights

Its been a long time since there are any updates on this game title.The game still features that crazy spirit, while adding new personality and game modes to the game, making a true 2020 successor to the franchise. Welcome back Crash!

It will be available from the 2nd October 2020 on the PS4 and Xbox One with PS4 digital version priced at  RM249 while the Xbox One price is yet to be confirmed.

Crash Bandicoot 4: It’s About TimeThe whacky marsupial is back and with a more modern look to him! No, this isn’t yet another remaster, but an original story game that continues right after the original trilogy ended more than 10 years ago.

As you have heard, Pokemon will be getting its own MOBA Game with crossplay between mobile and Switch. It will be free to play but the release that is yet to be confirmed.

Pokemon UniteDeveloped by Tencent’s TiMi Studios, Pokemon Unite is made by the same company and studio responsible for the inception of Call of Duty: Mobile. Players will be playing in a 5v5 team-based format in a multi-lane map

That’s all for this week. Happy Weekends!