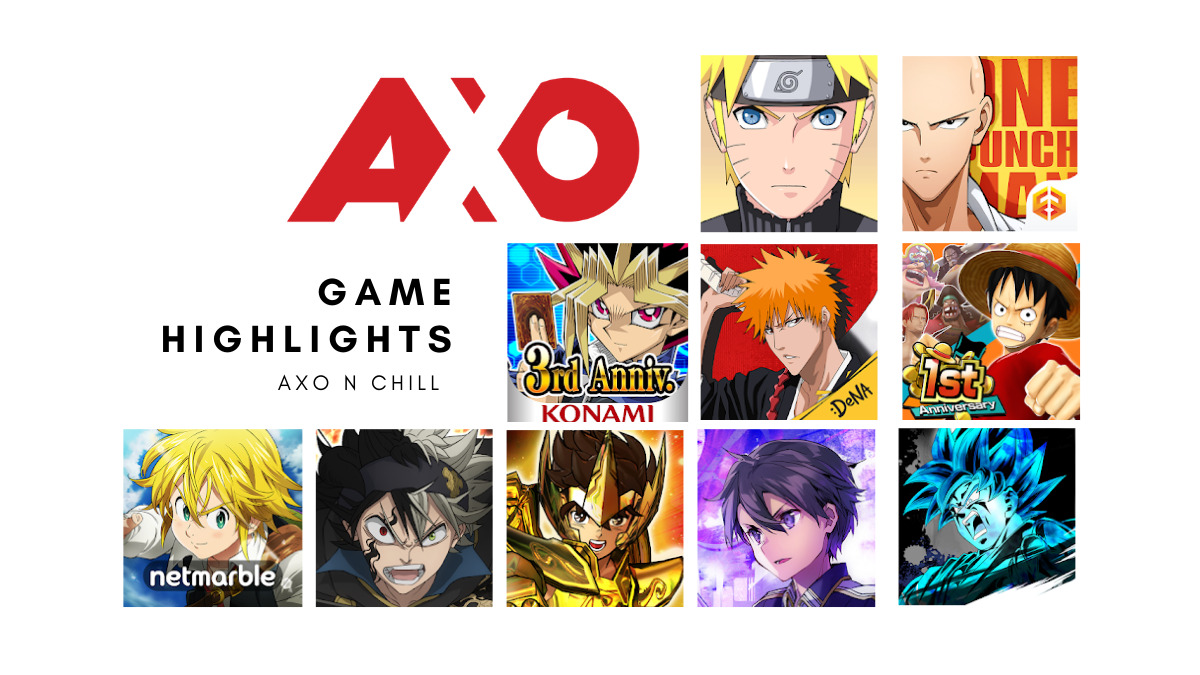 For this week’s AXO N Chill: Games, we are listing 10 anime mobile games that you can try out. Ouh! Did I mention these are free to download?! Try them out now!

Naruto: Slugfest is a 3D Open World Action MMORPG adapted from the anime – Naruto Shippuden. The game features cinematic 3D Visuals and plot restoration of the World of Naruto.​

​The plot starts in the Naruto Shippuden timeline where Naruto comes back to the Konoha Village after a two-year long training with Jiraiya. At the same time, the Five Shinobi Nations are now facing the biggest threat as the Akatsuki starts to become more active. Also, Naruto must deal with the loss of someone he considers a brother—Sasuke, who joins Orochimaru in exchange for power in order to have his revenge on his brother—Itachi.​

ONE PUNCH MAN: The Strongest

The first mobile turn-based strategy RPG authorized and adapted from popular Japanese ONE-PUNCH MAN IS HERE! This mobile game is adapted from anime ONE PUNCH MAN, originally produced by ONE and drawn by Murata Yuusuke. The whole game production was supervised by the production committee including SHUEISHA, following closely to the animation setting!

Players can fight along with Saitama, “The Strongest Hero”, meet challenges of various disasters and monsters. And you can recruit various heroes and monsters, and form your exclusive strongest lineup. Through smart strategy thinking and combination of unique character features and skills, you can dominate the battlefield and enjoy amazing gaming experience!

Take the loot you pirate! One Piece Bounty Rush is a 3D anime battle arena treasure looting game set in the popular manga pirate world of One Piece! Join Luffy, the famous Straw Hat Pirate and all your favorite characters from the One Piece universe in 4 vs 4 real-time pvp battles to rush and loot the treasure of berry coins for victory!

Join Kirito, Eugeo, and friends in their quest to save Alice and all of Underworld from new and dangerous threats. This anime RPG lets you explore a new anime storyline that expands the world of Sword Art Online.

The quintessential Saint Seiya experience, brought to you with the highest quality in smartphone gaming history!
Become the most powerful warrior in Saint Seiya Shining Soldiers!

Experience the Saint Seiya world with “Cosmo Chronicle Episode” Mode and take on any chapters you want. Scenario segments feature conversations between characters and famous scenes from the anime!
Enter the soundscape of Saint Seiya with voiced battle lines and famous BGM tracks like “Pegasus Fantasy.”

Defend the kingdom while aiming to create the strongest Magic
Knights Brigade in this exciting new Kingdom Defense RPG!

Join familiar faces like Asta, Noelle, and Yami in an all-new adventure! You can also meet Jien—a completely original character to this game! Enjoy a unique Black Clover story that can only be experienced here!

A brand-new turn-based RPG! A novel approach to combat! A strategic combat system utilizing skill synthesis. Skills with the same star rank upgrade to a higher rank when they’re next to each other!


Feel the thrill of battle with each turn in the dynamic combat system.
Combine cards and use them to trigger an “Ultimate Move” to decimate opponents! Create your own strategy by combining the unique skills of [The Seven Deadly Sins] characters.

Yu-Gi-Oh! is available on-the-go as a mobile game! Do you have what it takes to become the King of Games?
This game has easy to learn rules and simple controls for beginners! With engrossing and rewarding gameplay for “Yu-Gi-Oh!” veterans!
You Can duel players from around the world in this action-packed PvP card game! With a huge cast of characters from “Yu-Gi-Oh!,” “Yu-Gi-Oh! GX,” “Yu-Gi-Oh! 5D’s,” and “Yu-Gi-Oh! THE DARK SIDE OF DIMENSIONS“!