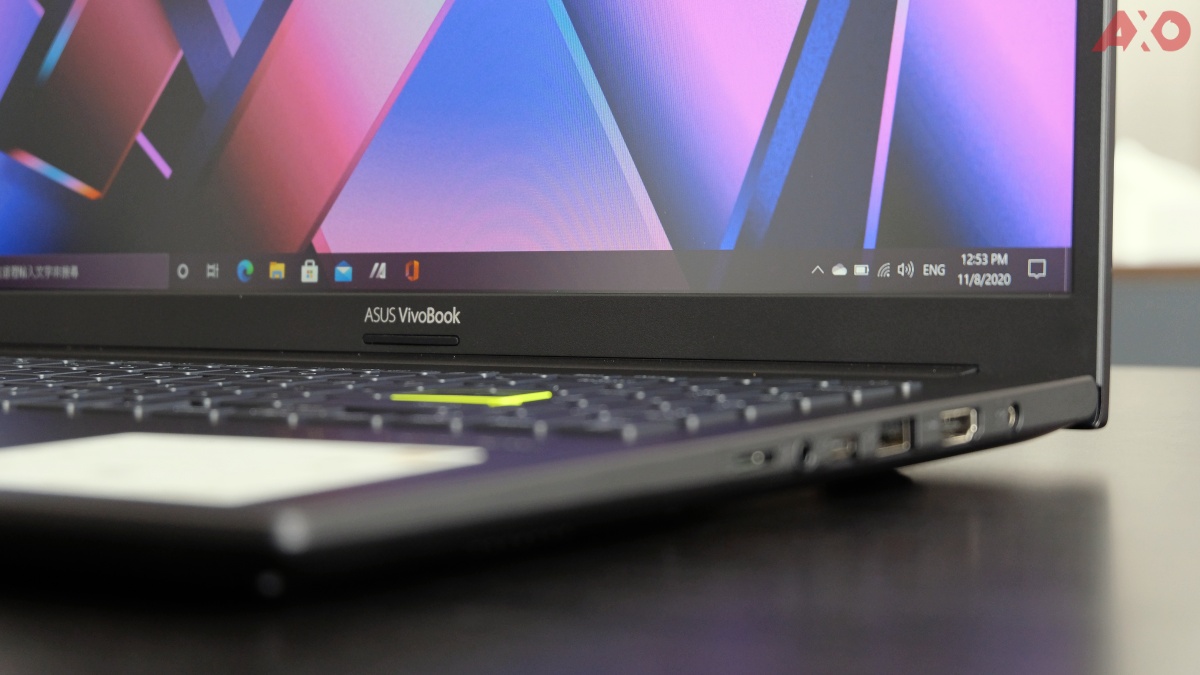 The new Asus VivoBook 15 (K513) is one of the new Asus laptop lineups to receive the 11th gen Intel Core processor refresh. It measures in at 17.9mm thin and weighs just 1.7KG. To further help you express yourself, the laptop also features bold colours and customization elements.

The Asus VivoBook 15 has a very minimalist, streamlined look with a punch of contrast in certain spot. The “Enter” key has been colour blocked, to signify questioning old practices and challenging new ideas. The laptop has a smooth matte finish all around, with its metal chassis. It’s rather light for a 15.6-inch laptop, and it feels really good in the hands. Although, it could be quite the fingerprint magnet.

On the left, you’ll find the two USB 2.0 Type-A ports with the battery status indicator, whereas on the right, is where the power port, full-sized HDMI port, another USB 3.2 Gen 1 Type-A port, USB Type-C port, 3.5mm audio jack, and the microSD card resides.

There are no ventilation holes on the sides, only the ones on the bottom of the laptop and some in the hinge area. It also has four rubber feet on the bottom, but it doesn’t provide much height increase to the typing angle.

The Asus VivoBook 15 has the NanoEdge display where it reduces the side bezels down to a minimum. The 15.6-inch display on the VivoBook 15 has a screen-to-body ratio of 84%, with the top and bottom bezels slightly thicker than the ones on the side. Apart from visuals looking bright and vivid, the laptop also comes with several visual improvements to improve quality of life.

The display panel is an IPS panel, so it supports a wide 178-degree viewing angle, which prevents colour distortion when viewing the laptop from the sides. It also has a TUV Rheinland Eye Care certification, so that your eyes are cared for if you’re spending a lot of time working in front of the laptop. Asus also included the Tru2Life video technology, which is mostly found in high-end TVs. It enhances clarity, colour, and contrast in video by intercepting image and video signals sent to the panel, and analyzing each pixel in the frame to optimize for the best image quality.

Despite the Asus VivoBook 15 having a smooth matte finish, I kind of wished the sides would have a more grippier material. I almost dropped it once, and it was because it was too smooth.

Other than that, the laptop is great for everyday use, and because of its weight, it’s very portable to bring around the house, or with you on your work commutes. It doesn’t weigh too much on your back, and it fits perfectly in the backpack that comes free with every purchase of the laptop.

The hinge is extremely firm, which is a good thing. But, because of that and the bottom half of the laptop is where most of the heft is, you can’t really open the laptop with a single finger. The indentation on the front of the lid is too shallow as well, so it’s quite hard to open the laptop at times.

The typing experience on the VivoBook 15 is quite similar to the VivoBook S15 that we reviewed before this. The keyboard has nice travel, but the keys can be a little mushy. The arrow keys are still squeezed up to form that straight rectangular layout, and the trackpad actually feels smoother than the S15. The size is just right, and the arm rest area is slightly bigger too so your hands have more space to roam around when working.

When it comes to the ports, I think Asus could’ve made some changes with the selection and the positioning. For one, instead of the microSD card reader, they should’ve went with a full sized SD card reader.

As for positioning, most of the ports are placed on the right side of the laptop. That means, if I were to connect the laptop to an external monitor, plug in the power port, insert a thumb drive, and plug in my earphones, the entire right section of the laptop would be filled up and there won’t be much space left for my right hand (if I’m using a mouse). If you aren’t using a mouse then it’s fine, but it would’ve been nice if the ports could be moved to the left instead.

For the fingerprint sensor, it works like a charm. It logs you in fast, with great accuracy, so no complaints there. Great positioning, too.

Where performance is concerned, the new Asus VivoBook 15 has the Asus Intelligent Performance Technology, also known as AIPT. What it does is it sets the Power Limit 1 value of the processor from 15 to 28 watts to improve overall performance up to 40% increase. To turn this on, just head to the MyASUS software on your Asus VivoBook 15, and change the battery settings to “Performance Mode”. It also promises all-day battery life with better power consumption efficiency, and quieter operation and cooler temperatures.

In our testing, the laptop was used for the entire day, and it only got mildly warm when used on my lap. On the table, it was fine and I didn’t feel any heat from the laptop because most of it was ventilated through the back and bottom. However, it would be better if you could prop the laptop up with a holder to improve overall airflow.

The Asus VivoBook 15 now also has the new upgraded IceBlade fans, which has up to 87 blades and each blade measures just 0.2 to 0.3mm thin. This results in more flow path, lower flow vortex noise, and higher efficiency.

Here are some of the performance benchmarks we ran on the Asus VivoBook 15:

The Asus VivoBook 15 does have dual stereo speakers tuned by Harman Kardon, as usual. The mids and highs are clear, which makes it great for conference calls. But what I was surprised to find was that it had decent bass. The lows are clean and although not thumpy, it’s better than nothing.

Apart from audio enjoyment, the Asus AudioWizard is also great at offering several presets to match the type of content/work you’re doing. In the MyASUS software, you can even enhance your microphone’s performance using the ClearVoice Mic settings. You can choose how the microphone picks up audio, and that’s great if you have multiple people with you who’s presenting.

The 42Wh battery on the Asus VivoBook 15 could last me for about 10 hours a day on casual/work use. I listen to music a lot, so the speakers are on as long as I’m working on the laptop.

As for the charger, it doesn’t come with those newer 65W compact chargers, but the “traditional” brick charger. Don’t get me wrong, the charger is still small, but it would’ve been nice if the laptop could charge via USB Type-C instead so there’s more variety when it comes to charging.

For the price of RM3,299, the Asus VivoBook 15 offers quite the value as it comes packed with the latest Intel has to offer with its 11th gen processors, and a Nvidia GeForce MX350 so you can do some light gaming after you’re done with all that work throughout the day.

Compared to its smaller sibling, which is priced at RM3,099, the VivoBook 15 offers a larger display and a dedicated Nvidia GeForce graphics. That RM200 difference is definitely something you should invest to because it’s a huge jump if you want to have that extra graphics kick.

It’s relatively thin, with an acceptable heft. The display is bright, and the 512GB PCIe SSD storage is abundant for you store all your data (Goodbye, slow HDDs!). The inclusion of the fingerprint sensor in the trackpad also makes it great for when you want to quickly login to your PC.

In this article:ASUS, laptop, Review 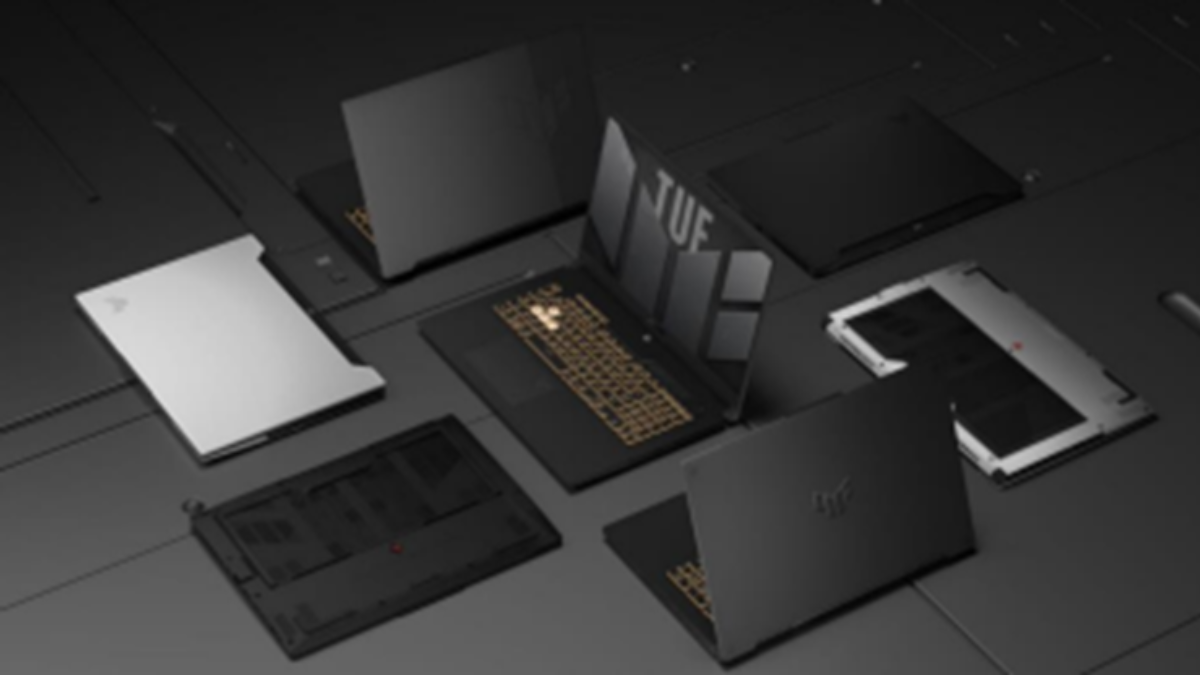